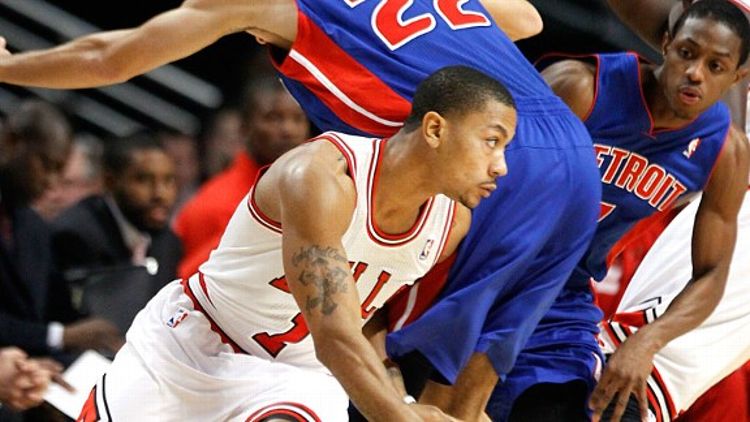 What happened last night, what’s happening tonight, who said what and what you should read. All here in your afternoon NBA Shootaround …

Andrea Bargnani, Toronto Raptors
The Sixers racked up their fifth in a row, Josh Smith put 26 on the Nets (Jersey vs. Atlanta is the best rivalry in the NBA, except take out the word “best” and replace it with “most tedious”) and the Bulls defense threw the figure-four brain lock on Detroit, allowing the Pistons only 68 points. But the inaugural Shootaround victory sceptre (we’re having them smithed as we speak) goes to “Il Mago.”

The Raptors took out the Wolves last night in T-Dot. You should check the highlights, if only to see Derrick Williams’ great ball-fake-lane-blitz-and-dunk in the fourth quarter and Anthony Randolph nearly breaking himself in half earlier in the game. But the night belonged to Bargnani. The first pick of the 2006 draft is maturing like a fine Italian red, averaging 23 and 6 this season.

Bargnani’s performance last night prompted Raptors coach Dwane Casey to totally text everyone he knows, “Andrea for me, I’ve been telling all my coaching friends around the league, he’s been playing like an all-star on both ends of the floor, not just offensively: defensively and offensively, rebounding, coming back on the boards.” Exactly how Bryan Colangelo drew it up.

For … Rubio vs. Rose
Two of the league’s bright young things square off tonight, as the Lobos head back over the border to battle the Bulls in Chicago. This is a team game but if you were going to beg, borrow or steal an illegal stream of this game is to watch two players do battle: Derrick Rose and Ricky Rubio. Any night where the two most exciting point guards in the league square off is one worth DVR’ing Celebrity Wife Swap for.

If you don’t feel like watching Rose leave Michael Beasley in his rearview mirror or Ricky making telepathic, one-handed, cross-court bounce passes, there’s always the Theater of Pain Game of the Night: Toronto vs. Washington.

Also, for the West Coasters and night owls: Lob City vs. Rip City (Clippers-Blazers) at the Rose Garden.

Patton. Julius Ceasar. Winston Churchill. Franklin D. Roosevelt. Mel Gibson in Braveheart. Leaders of men, steady hands in a crisis. They opened their mouths and you thought, “This is your captain speaking.” You need a hero? Look no further than the Wizards’ Andray Blatche. Here is his most recent koan of wisdom:

“Our strength is we got a lot of great scorers, and that’s our weakness. We tend to panic when we get down by seven or nine points. But like Flip always say, there’s no nine-point basket.”

On his off-season workout partner: “I had to stop sometimes and catch myself: ‘Damn, I’m working out with Shawn Kemp.”