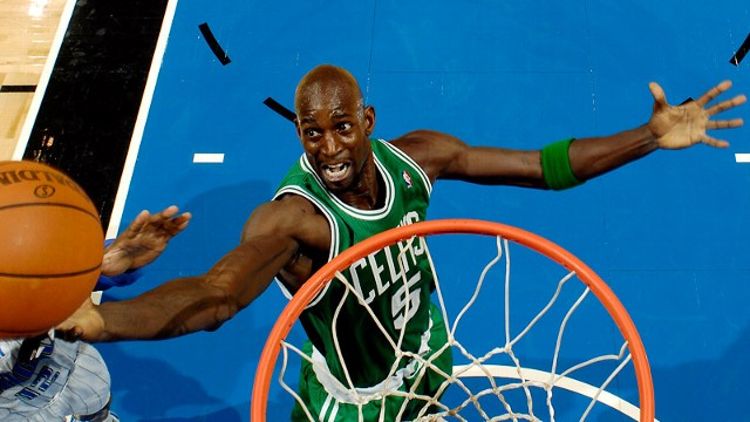 “Man, I’m All Over the Place Tonight”

So first off let’s just say fist-bump-explosion-sound-effect to the Boston Celtics, who came back from down 27 Thursday night to beat the Orlando Magic. Love them or hate them, it’s more entertaining to have them in the mix. The win was Boston’s third in a row and could be a turning point in its season.

Two things about this game stood out. 1. Quentin Richardson doing air-guitar-Pete Townshend-windmills on the sideline (1:13 into this video) over a Jameer Nelson 3-pointer (I know, the Magic had gone up 27, but drink some dream water, Q) and 2. Kevin Garnett’s WAY TOO INTENSE FOR JANUARY postgame interview with Craig Sager, after the Celtics had come from behind for the win.

Garnett usually saves his particularly insane, Walt Whitman-meets-caveman brand of motivational speaking for the playoffs, but for a while there it looked like Boston wasn’t going to make the postseason. So it’s not all that surprising that he yanked this one out of the oven on Sager last night:

It’s a bar fight, Craig! As spectacular KG off-court moments go, I’m going to rank this one, I think, third behind the obvious no. 1 pick, ANYTHING IS POSSIBLE …

… and a sly, sleeper no. 2 wherein this Rondo interview is interrupted because KG is screaming “CELTICS VISION” in a COMPLETELY DIFFERENT ROOM. Why is he screaming that?

Then throw “It’s a goddamn bar fight!” the bronze medal, and round out the top five with this example of KG’s very loose understanding of the Marvel and DC universes and the respective importance of Robin versus Batman versus a sanitation worker:

Along with this letter to the editor of Soldier of Fortune:

Anyway, Thursday night Garnett gave a solid individual performance in a classic Celtics win. It was only right he gave an all-timer postgame interview.

Is Tonight the Night …

For the Mike D’Antoni Farewell Tour? Ken Berger has a pretty damning piece up over at CBSSports.com that paints a dark portrait of the Knicks locker room. According to the piece, D’Antoni was never behind trading for Carmelo Anthony and is watching his supposedly high-octane offense stall out in the absence of a money outside shooter and quality point guard. Not exactly the best time to get air raided by LeBron. Should at least make for interesting television.

Quote of the Day: Steve Nash

On the grueling, injury-inducing NBA schedule: “It takes more than a couple of beers and a nap in the afternoon.”