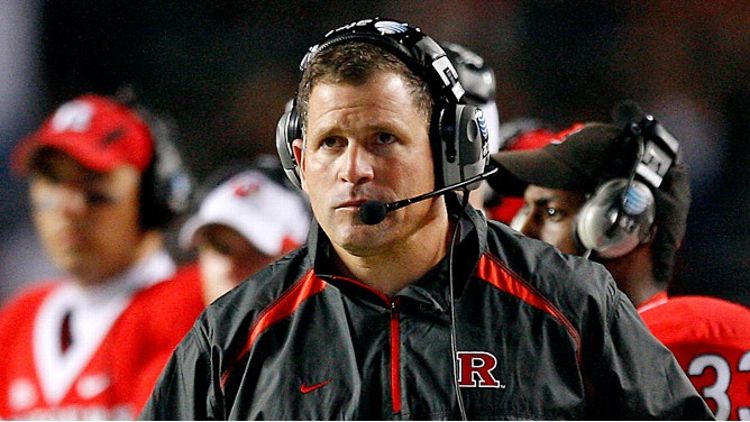 I have no idea if Greg Schiano will be a successful coach in Tampa Bay. The early consensus appears to be that he will fail. This is because Schiano doesn’t have the feel of a successful pro coach, which I guess is what happens when an NFL franchise goes after someone who is not comically self-absorbed and/or vaguely sociopathic. Schiano comes across as a genuinely decent man; when one of his players suffered a severe spinal injury during a kickoff, it affected him so deeply that he suggested college football abolish kickoffs altogether. He managed to build a competitive program at Rutgers, a school where football hadn’t been relevant since the publication of War and Peace by emphasizing discipline and organization while stressing academics.

In other words, he seems like a college football coach.

I’m sure Schiano had his reasons for leaving, and I’m guessing those reasons had something to do with (a) the money, and (b) his ego. The former makes perfect sense. It’s the latter that baffles me, because what Schiano did at Rutgers (and could potentially have done in the next five years) actually seems much more difficult than anything he could ever do with the Bucs, because college coaching is actually a much more complex emotional challenge than the NFL. And yet it is still viewed as an inferior profession, which is why every coach who bolts for the pros cites “the challenge.”

“I don’t care if it was Little League baseball to get to the Pony League or Pony League to get to the American Legion,” Nick Saban said upon being hired by the Dolphins in 2005. “Whatever it was, it was always the next challenge that makes driven people want to take advantage of the next opportunity.”

Saban was a failure in Miami, and this probably explains why. That quote is all ego; it is an admission that he took the job because he felt like he had to step up one more rung on some artificial stepladder in the coaching treehouse. Obviously, pro football is more popular nationwide, and obviously pro football is played at an empirically higher level, but doesn’t that make it easier in certain ways? NFL coaches may need to focus more on detail and rigor and repetition, but they don’t have to do so with a roster full of imperfect and undeveloped products (unless they are hired by Dan Snyder), and they don’t have to speak at alumni dinners in Kalamazoo, and they don’t have to worry about their defensive backs showing up for astronomy exams.

And, of course, they don’t have to recruit.

As far as I can tell, this is the only good reason (beyond straight cash) for any coach to jump from a successful college head coaching job to the pros. I would rather be a traveling encyclopedia salesman with an enormous goiter than a college recruiter. If I spent weeks at a time exchanging text messages with fickle 17-year-olds and sitting in the stands at Friday-night games in Altoona for the opportunity to make eyes at a defensive back, I’d probably have a nervous breakdown at a Holiday Inn Express.

But that’s what so strange: It’s often the coaches who are great recruiters (see: Saban, Pete Carroll, Lou Holtz, etc.) who choose to bolt for the NFL. Schiano was on the verge of bringing in one of the best classes in Rutgers history; several years of moderate success were bearing fruit in one of the country’s most fertile recruiting territories. Yet the same self-assurance that enables men like Schiano to pitch their programs so effectively is what compels them to leave. They think they’re taking a step up, when really they’re just moving sideways.

The Shootaround: NBA News, Notes, and It's a Bar Fight, Craig!