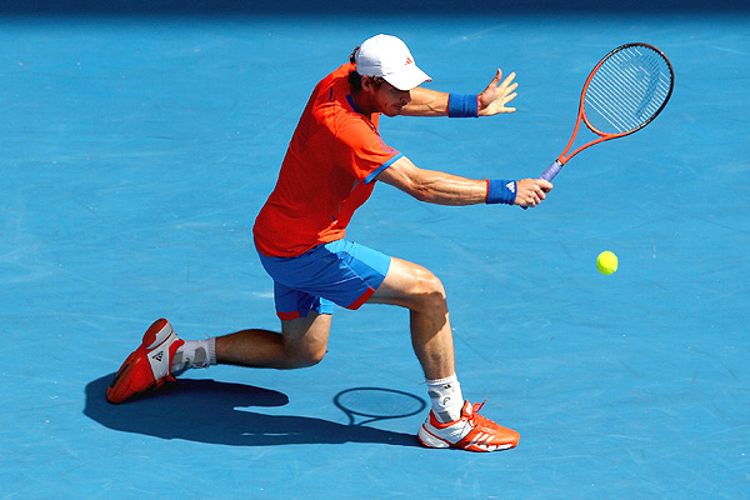 I was glued to the television, with McCafé pumping caffeine through my bloodstream, for the first 38 games of the Australian Open semifinal match between Novak Djokovic and Andy Murray. But I wasn’t emotionally invested in the slightest. The old adage, “fool me once, shame on you, fool me 22 times, shame on me” was in full effect, because this is, after all, Andy Murray we’re talking about.

When Murray won the tiebreaker to go up two sets to one, I barely entertained the idea of him winning in four sets. Did I think Djokovic would dust him 6-1 in the fourth? No, but I was almost prepping myself for the fifth set, 30 minutes before it was a reality.

As the two held serve in the fifth, I laid down, holding my eyes open, waiting for Novak to break him and win this match. As Murray served, down 3-2, it finally happened, and Djokovic finally showed the first true “Throwback Novak” emotions of the night. In my mind, it was over. Djokovic broke Murray, and then like a true champion held his own serve to go up, 5-2.

It was a classic Murray vs. Big Three late-Slam match.

Throughout the Australian Open, we’ve repeatedly heard that Murray was playing better than ever, potentially due to his new coach, tennis legend Ivan Lendl. The ease at which he won many of his matches was, somehow, convincing people that this could be his year. Personally, I didn’t buy any of it. With Murray, it has never been about the skill set. Andy Murray hits the ball, has as good of footwork, and is in as good of shape as any member of the Tennis Triumvirate. It’s not about mechanics. To put it bluntly, Murray’s a head case.

Singles tennis is as psychological of a sport as there is, because not only are you in your own head, without teammates to confide in (for the good or the bad), there’s also someone 78 feet away who is attempting to get in your head. After you sort through all of that, then you can begin to think about mechanics.

The pre-mechanics are what have left Andy Murray Grand Slam-less and made him the whipping boy to his three biggest competitors.

With Murray down 5-2 and serving to stay alive, he seemed determined but out of gas. He won his first two points, but then lost the following two when Djokovic blasted two winners that left Andy looking confused and defeated. Still, with seemingly nothing left, he found a way to hold his serve, putting the fate of the match on Novak’s racquet.

At this point, the unthinkable happens. With top-ranked Djokovic serving for the match, he loses four straight points. I couldn’t believe it. I was convinced my McCafé had been roofied. Murray had shown heart before, no doubt, but the way in which he won that game allowed the first “what if?” thought to sneak into my brain. For the first time in the match — and perhaps in the history of Murray’s career against Djokovic on this stage — I saw what appeared to be Murray’s outer confidence mirroring his inner confidence.

Going into his service game, he’d won six straight points. He’s in such a zone, I genuinely didn’t see him slowing down, unless something potentially rattled him.

And then something potentially rattled him.

After being up in the game (but down a fault), someone yelled from the stands. Murray paused and become visibly upset. His tunnel vision had been interrupted. Once that seemed to blow over, a loose ball rolled onto Djokovic’s side, further stalling the point. It was almost as if the Tennis Gods were icing the server.

Unsure if he had fallen back into vintage Murray mode, I held my breath as he lost the point. The emotional investment that I claimed to lack in the first four (and some change) sets was present now. I stood up and watched, as Murray won the next point on his backhand, the next on a Djokovic error, and the final on a big forehand. Murray’s streaky behavior seemed to be back, and with the set tied at 5-5, the possibility of Murray winning this match became very real. His shot selection was impressive, but the fact that he wasn’t too distracted by that minor speed bump had me believing Murray might finally make it over the hump. Finally.

With Djokovic serving, Murray looked confident. After being up 15-0, Djokovic came to the net and Murray hit a lob over his head. It looked in. But it was called out — and Murray was out of challenges. Again, Murray is at a crossroads; he could let the call get under his skin (the viewers know that it was, in fact, out, but Murray doesn’t) or he could brush it off and keep going. For a second time, again showing signs of “New Murray,” he bounced back by winning the next two points. If this string of responding to hardship with a flurry of points continued, I really believed he would win. The two go back and forth, and Djokovic finally musters up the shots to put Murray away. And just like that, Murray is back in familiar territory: serving to stay in the match.

He goes down 15-0 on a backhand slice that veered out of bounds. The shot was lazily hit, and Murray knew it. How did he respond? With a huge, confident inside-out forehand that Djokovic didn’t have a chance of returning. At 15-all, after trading strokes, Murray hits a shot that is called long. Again, the television-viewing public knows that the shot barely missed the line, but Murray doesn’t. And for a third, and perhaps final time, Murray is at a crossroads: Will he get rattled or push forward?

Who knows whether the culprit was his head, or the fact that he was playing Djokovic, but the next two points would be the final two points, with Novak closing out the match in convincing fashion.

As Murray packed up his racquets and received a rousing ovation from the Aussie crowd that had very much stayed in his corner, the statement was made about his performance: “He will move forward from this.” I initially disagreed. In some ways, this could be the most demoralizing loss of Murray’s career. His head finally started to get in line with the rest of his body, and he still lost. That’s tough to bounce back from.

But I sincerely believe that he will. He showed something that had nothing to do with his ability to play tennis. He began the process of overcoming some of his mental demons. Sure, they aren’t all gone, but at least he knows he’s not a lost cause. If he sees this tournament as the first in the second stage of his career, we could very well be talking about the Big Four in a years time. Before this match, saying that I wasn’t an Andy Murray fan would be a gross understatement. I dogged him out on numerous occasions, in public and in private. After this match, he made me more of a believer in a loss than he did in any win of his career.

Congrats, loser. I think you’re finally on your way.