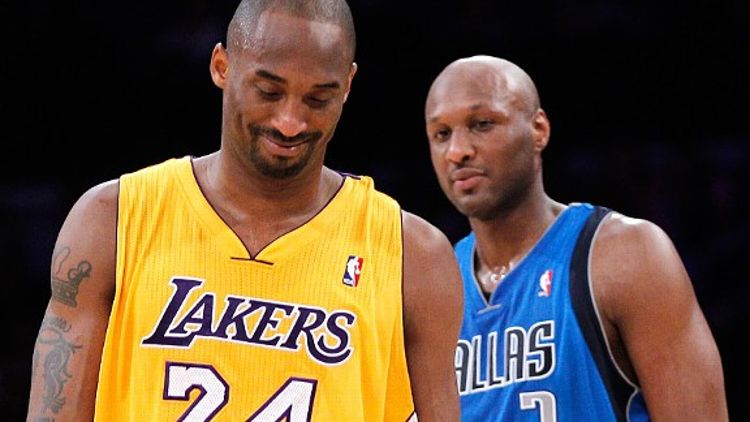 Obviously Thomas Wolfe, writer of the novel from which our little sub-hed borrows its name, never met Kendrick Perkins or Lamar Odom. This is largely due to the fact that he died in 1938. But let’s say he had lived to see Perk and Lamar return to their old stomping grounds last night. Surely he would have been kicking himself for naming a book that. He would’ve been like, “Damn, Tom, you played yourself.” Last night Dallas and Boston hailed their conquering (and departed) heroes. And it was kind of beautiful.

Everybody loves trade rumors, everybody loves to double over at deals gone awry and there’s a weird NBA thing where we (the fans, the professional league watchers, etc.) seem to revel in the wrong turns franchises and players sometimes make. Sometimes, and imagine a crackling fireplace behind me right now, we forget that the players are people. And when they leave a team and a city, by their own volition or because management sent them elsewhere, they leave behind a bit of themselves.

If you needed any evidence of this, it was on full display Monday night at the Staples Center in Los Angeles and the Garden in Boston. What was also on display was the deep emotional ties fans make with championship teams. There are obvious surface reasons for this (namely, “We love you because your victories allowed us to flip cars and take a day off work to go to a parade”) but it goes deeper than that.

That’s what I thought of watching Lamar Odom take the floor Monday night, returning to L.A. for the first time since he was unceremoniously dealt for table scraps to Dallas.

I haven’t seen that many surgically enhanced or repaired faces struggle to show emotion since I watched the Friday Night Lights finale with Meg Ryan and Michelle Pfeiffer (totally did that, not making it up for a joke). The warmth and emotion was palatable, though for Odom the reception was probably bittersweet. He’s had some serious separation anxiety since joining Dallas; to see how badly he was missed probably made his situation feel all the more alienating. All he could muster, standing next to his one-time teammate Pau Gasol, waiting for a free throw to go up, was a little wave. All the love in the world wasn’t going to change his mailing address. He knew it.

I won’t presume to psychoanalyze Kendrick Perkins in the same way, mostly because I’m just scared to. Perk was treated to a video montage in the first quarter, featuring some of his great moments as a Celtic, which he acknowledged, even if his expression always suggested a deep desire to throw office furniture out of windows. Jokes aside, Perk was a class act after the game:

All in all, it was a night where you saw a wide arrange of emotions — resentment, anger, sadness, regret, celebration and appreciation — on display. It was two storied franchises confronted with their controversial decisions and two rabid fan-bases showing just how they felt about their old champions. Odom and Perk wear different jerseys now, but they will always be Lakers and Celtics. The fans let them know that.

Chris Paul is questionable for the Clippers game against the Jazz. So rather than watch the Chauncey Billups run Vinny Del Negro’s “offense.” So why not peep a surprisingly hot Spurs team take on LeBron and Co. in Miami.

Quote Of The Day: JaVale McGee

Following a game in which he performed a self-alley-oop, the Wizards forward was upbraided by his beleaguered coach, Flip Saunders. Here was McGee’s response (via The Washington Post): “Apparently, if you get a fast break and throw it off the backboard in the third quarter, and you’re 1-11, you’re not supposed to do stuff like that.” You just got Blatched, kid.