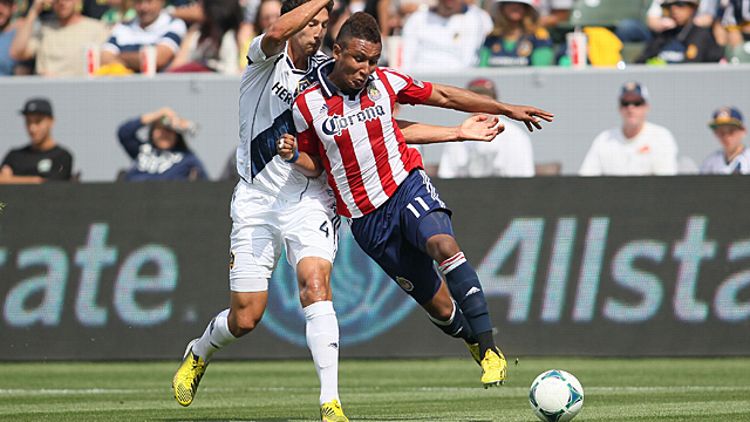 On November 17, 2010, 17-year-old Juan Agudelo made his debut with the United States men’s national team, wearing the no. 17 shirt and scoring the only goal in a 1-0 win over South Africa. Four months later, the teenager found the back of the net in a 1-1 draw against Argentina, and U.S. fans were buzzing about his impressive potential. Was Agudelo the forward they had been waiting for? Had the phenom finally arrived?

Sadly, no. Although he earned 12 more caps in 2011, Agudelo failed to score, and he had difficulty getting time with the New York Red Bulls as well. A 2012 trade to Chivas USA didn’t help, as the Colombia-born forward struggled with injuries and inconsistency. Agudelo made an appearance for the Americans in late 2012, earning an assist against Russia, and another in January 2013, but never broke through in a meaningful way. He moved to the New England Revolution in May, tallying three goals in his first five matches but hasn’t played since late June because of injury. The soccer world hasn’t given up on him yet — he recently signed a pre-contract with English Premier League side Stoke City to transfer this winter — but it hasn’t been the three-year span he wanted or fans were hoping for.

While the exact details of Agudelo’s struggles are unique to the young player, the general narrative is not: An athletic, talented American attacking player bursts onto the national team scene, scoring a goal or three, galvanizing supporters and media alike. Then, almost as quickly, he struggles, failing to score for his country and losing playing time with his club. This drought causes him to fade to the fringes of the national team. Some, like Jozy Altidore and Eddie Johnson, eventually return to the U.S. side and make an impact. Others, like Teal Bunbury, who debuted in the same match as Agudelo, have yet to find their way back.

Why do so many promising young forwards run into fallow stretches?

It’s a combination of a few factors. A major one is the increase in playing time frequently leads to a young player getting hurt. The jump from a youth club to a professional environment is difficult. More matches at a higher, more physical level of competition equals massive stress on a body, even a playable teenage one.

“It’s tough to keep your body in shape when you have so many games and the understanding of how to recover from an injury, recovering fitness. It’s tough on your legs. The recovery process is very important,” Agudelo said over the phone. “At the Academy, we would never stretch after practice. Once I signed with the pro team, it became very important. A lot of people emphasized that.”

Injuries lead to inconsistent playing time and the near impossibility of getting into a rhythm, which is essential for a forward. “I feel like I haven’t had a consistent run because of injuries,” Agudelo explained. “I can’t remember the last time I played like eight games in a row.”

There’s a bigger issue at play here: The system itself is flawed. Instead of bringing players along slowly, any early hint of success triggers excitement from the fans, media, and coaches. It’s all detrimental to a player’s success. In many ways, with great expectations comes great failure, and that’s not fair to the player.

“Guys like Teal Bunbury and Agudelo get overhyped. They don’t live up to the hype and it’s like ‘What’s wrong with them?’ In some sense that’s fair, but when they are 18 or 19, they need a stable club situation and to stay healthy. That’s been the hardest thing of all,” said Will Parchman, a writer for Top Drawer Soccer who penned a series of stories about the American striker. “The fans are one thing. Fan expectations may be a little bit ridiculous, but it’s the same way all over the world, especially in England. You always hear about who’s going to be the next big guy. I think the problem is that the coaches have almost the same mentality. They seem to be pushing almost in lockstep with the fans, which is ugly. After Bunbury exploded on the scene in South Africa, it seems like there was this rush to get him on the field. He stumbled a little bit and it’s like ‘On to the next one.'”

Altidore is one of the “next ones” who seems to be making it on the national level. After debuting with the New York Red Bulls as a 16-year-old and scoring 15 goals in 37 matches, he left for Villarreal on a $10 million transfer but never caught on with the Spanish side or the three loan stints he went on during his time there. While he remained a fixture in the American lineup, he didn’t post the production fans (or his coaches) expected. Eventually, he made his way to AZ in the Netherlands, where he met coach Gertjan Verbeek. He spent two seasons under the manager’s tutelage, earning playing time and developing a more subtle understanding of the game. “He has that tactical discipline now,” Parchman said.

In June, Altidore showed off his refined abilities while scoring in four consecutive matches for the USMNT. The pace won’t continue, but the forward looks to have pushed past the young striker scoring slump. And here’s the thing about Altidore: He turns 24 in November. That is not old, even in the fast-forward world of international soccer. Of the top seven goal scorers at the 2010 World Cup, only Thomas Müller was within two years of Altidore, and most were significantly older.

Agudelo turns 21 in November. That’s the thing about starting young: A player has time to fall flat, get up, and get moving again.

“I feel like every single day I’m improving, whether it’s mentally while I’m watching when I’m injured or when I’m on the field,” Agudelo said. “No matter what, if you’re out there you pay attention. The most important thing is that you improve every day. The opportunities will come.”