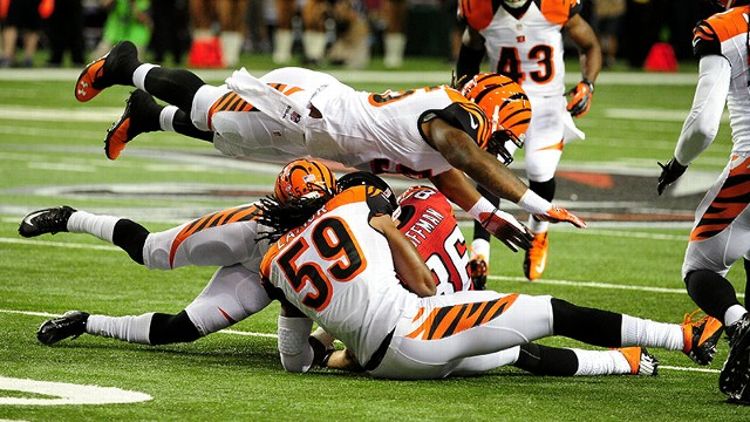 Hard Knocks is great every year because it makes you fall in love with an entire football team. You get to know a few stars, get irrationally invested in a couple of role players, and you even start to like the coaches. It’s like clockwork. For instance, I’ll be a lifelong fan of Chris Hogan from last year’s Hard Knocks with the Dolphins. (Chris Hogan, always open. 7-Eleven forever.)

If you’re stuck with the 2002 Cowboys — seriously, look at the ’02 story lines here — or the ’07 Chiefs, or the Dolphins from last year, it’s hard to forget you’re watching a team that’s almost certainly going to get destroyed. But the Bengals this year?

Mind you, the NFL’s completely impossible to predict these days, but as we get to know guys like Vontaze Burfict, Geno Atkins, A.J. Green, and Gio Bernard … these are all really good players. Watching last night, I realized that becoming a Bengals fan this year might be the best-case scenario for a solid 80 percent of football fans. Everything hinges on Andy Dalton, probably, but if he doesn’t sabotage things, the rest of the roster looks pretty great across the board. This year, we should all be lucky enough to be Alex Pappademas. And thanks to Hard Knocks, we all have a built-in excuse!

That’s the real reason is it’s great to have Hard Knocks covering a good team. It gives us all an excuse to root for a team that doesn’t suck as much as the team we’re stuck with otherwise. With that in mind, LET’S GO BENGALS.

And if the Bengals go 6-10 this year, I apologize to everyone for what just happened here. In any case, let’s get into the recap. A few lessons we learned from last night’s Hard Knocks …

Maybe it’s because I’ve always imagined him as Alvin Mack from The Program, or maybe it’s because this photo of him menacing Matt Barkley is burned into my memory, but Burfict will always have a special place in my heart. Last week we got to see him go golfing and destroy a windshield; this week we see him at the Bengals-Falcons intrasquad practice, where he’s talking shit to Roddy White, scrapping with Falcons linemen, and almost starting a fight with new Falcons running back Steven Jackson.

“I ain’t scared of your bitch ass!” Burfict screams.

“Last year I woulda swung on him,” Burfict tells his teammate afterward.

Either way: Burfict is football in a nutshell. Not totally sane or safe, but completely awesome. And definitely not scared of your bitch ass. That’s him in the picture above flying horizontally into the tackle. Of course that’s him.

If you’ve watched sports for long enough, you know that Europeans in a locker room are a never-ending source of comedy. Their English is always slightly askew, and next to a team full of American athletes the juxtaposition is the gift that never stops giving. Exhibit A is above. Typically this phenomenon is limited to the NBA, but thanks to Bengals defensive end Margus Hunt, this year it’s happening on Hard Knocks too.

The quote above was followed up with his teammate asking, “Where you from, England?”

According to a teammate, Hunt was 18 years old the first time he saw a black person, and after a career as a shot-putter, now he’s an NFL rookie nicknamed “Drago.” Awesome. NFL Films should really follow him all season long, just to see what happens. As the HBO narrator explains, “Hunt has heard all the jokes, but … he’s providing more punch than punch lines.” ESTONIA, BRO.

3. The Bengals May Need a Backup Quarterback

“I’m gonna start bringing a shot glass to practice,” Jay Gruden tells no. 2 quarterback Josh Johnson early in the episode. “You drive me to alcoholism.”

That’s Taylor Mays describing life without his girlfriend. Thank god for technology. “When you’re in camp, little things help you get through it,” he explains. “Like little conversations, text messages, or, I don’t know, laughs.”

I’m telling you, if you’re trying to get your girlfriend to like football, START WITH HARD KNOCKS. Elsewhere, Mays admits that his girlfriend helps him shave, which … well, even Dalton and his rubber wedding ring think that’s a bridge too far.

Terence Newman: “Chicks dig soccer players, and baseball players, and quarterbacks. In that order. What do you think?”

“I’ve never had a problem getting a chick,” Pacman says.

Perfect. That was the best random moment of the episode.

(The worst: Watching Orson Charles struggle at fullback all episode, then get benched in the preseason game, then walk over to his replacement John Conner and say, “Hey John, if you get tired let me know and I’ll come in for you.” Terrible.)

(But still much better than Larry Black’s injury last week.)

6. James Harrison Is a Sucker for Love Songs

• Harrison hates Hard Knocks. “I don’t feel they deserve to be here,” he said this week. “They did nothing to be here, other than want to be here. They didn’t put no blood, sweat, and tears into none of this. All these men in here, they did that. They (the cameras) did nothing. No one deserves to see this, to come inside of this unless you’re a part of this. That’s why.” This is batshit insanity, sure, but that’s why we love Harrison. He is the person who will flip off the cameras, not as a joke, but as a warning.

• Terrence Stephens is an undrafted free agent defensive tackle out of Stanford, and before he got to the NFL, he tried out for American Idol. “I was 16 and it was something that I had always wanted to do,” he told Bengals.com. “I didn’t get as far as I wanted to, but it was an interesting experience to say the least.”

So of course this led to Stephens being brought in front of the whole team to sing Luther Vandross’ “Superstar.” And when this all got started, Harrison was not amused. Of course he wasn’t.

Even Harrison can’t resist Stephens’s charms. Harrison was more into it than anyone in the room. When it was over, my roommate worried that he was going to rip Stephens’s head off as a sign of affection. It was all pretty perfect.

And for the record, I feel like 90 percent of NFL defensive tackles are all just waiting for someone to ask them to sing. We should really do this more often. We should do Hard Knocks every night. In the meantime, nice work, Terrence Stephens.