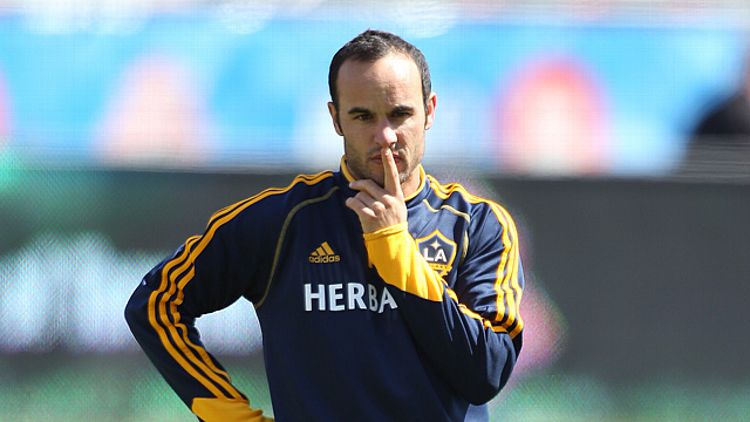 “I’ve been doing this a long time,” said Landon Donovan. It was March 28, and the most famous American soccer player in the world was speaking to reporters on a conference call, his first contact with the media since retreating from the soccer world in December 2012. Earlier last week, he had rejoined the Los Angeles Galaxy, training with the team and accompanying the MLS Cup champions on their visit to the White House. President Obama had jokingly offered to let him take Air Force One down to Mexico to join the U.S. Men’s National Team at Azteca. But while he didn’t take the president up on his offer, he was, for all intents and purposes, back. On the phone, his voice was its familiar soft monotone, at once seemingly passive and yet entirely sincere.

Listening to the conference call, I was struck with how long Donovan had been playing professional soccer, how long he had been part of my soccer world. It was fourteen years ago, 1999, when I’d first heard of him. I was 18 — on my way to play soccer at Wake Forest University with all the glory of a “recruited walk-on” — when I heard about this 17-year-old phenom at the IMG Academy in Bradenton, Florida, scoring goals and running the “Beep Test” like Edgar Davids.

Three years later, in the summer of 2002, I was living the life of many other young American soccer players: coaching at a soccer camp and training for my senior year of Division III (I’d transferred out of Wake Forest because I decided I liked drinking beer, reading books, and writing more than attending 6 a.m. power-lifting sessions and doing Fartleks in the Carolina August heat). And there was Donovan, starting for the U.S. in the World Cup as a 20-year-old, wreaking havoc on defenses, scoring goals against Poland and Mexico, barely missing the net in the quarterfinals against Germany. In the summer of 2006, when I was in graduate school, learning to write fiction, Donovan was playing in the World Cup in Germany, along with his U.S. teammates putting on one of the most uninspired, disappointing, and flat-out embarrassing performances in U.S. World Cup history. In 2010, when I was working full time and had a wife and kids, Donovan became a national hero with his goal in stoppage time against Algeria.

On the phone, Donovan talked about how all that time, all those games had worn him down. “I had lost that real passion and desire to do it every day,” he said. “I had gotten to the point where it was just becoming a burden a little bit on my personal life and my mental well-being.”

Since going on his “break” in December, Donovan has been criticized by fans and pundits for essentially turning his back on the USMNT when it was on the verge of beginning the Hexagonal.

But what Donovan made clear on the conference call was that he was in a poor state by the end of 2012. “I was mentally and physically exhausted,” he said. “I’ll keep it pretty vague.”

“Unfortunately,” he said, “in this society and probably in many other societies, we have a stigma that being in a difficult mental place is not acceptable. We should pull ourselves up by the bootstraps and fight through it. It’s a little peculiar to me that whole idea. If someone’s physically hurt, we’re OK with letting them take the time they need to come back, but if someone’s in a difficult place mentally, we’re not OK with allowing them to take the time they need to come back.”

I started to think about the way Donovan appeared back in November, during the MLS playoffs: tired, almost empty eyes; a strain in his voice; a profusion of stubble that he would sport for weeks on end.

Donovan said his time off “was everything I needed and has made me excited to come back and play again.” And only a few minutes into the conference call he stated his desire to return to the USMNT: “I would absolutely love to be a part of the national team again. I am itching to represent my country.”

But he immediately added: “I also understand very clearly that some decisions I have made are gonna make that a difficult task.”

Donovan knew what he was losing by walking away in December. “It’s my job to make it so that I can play with the national team again. That is something I understood very clearly when I made the decision to take some time off.”

According to Kevin Baxter of the Los Angeles Times, Donovan has averaged one game every eight days for 12 years. It’s no surprise that he needed a break. “The feeling I have right now, I want to last,” he said. “And I’m gonna work very hard at making it last so that I can still play this game and enjoy it and contribute, hopefully to numerous teams.”

My guess is that Donovan’s feeling will last, that the national team will be one of the teams he contributes to, and that he’ll be around for a while.

He’s made it this far.