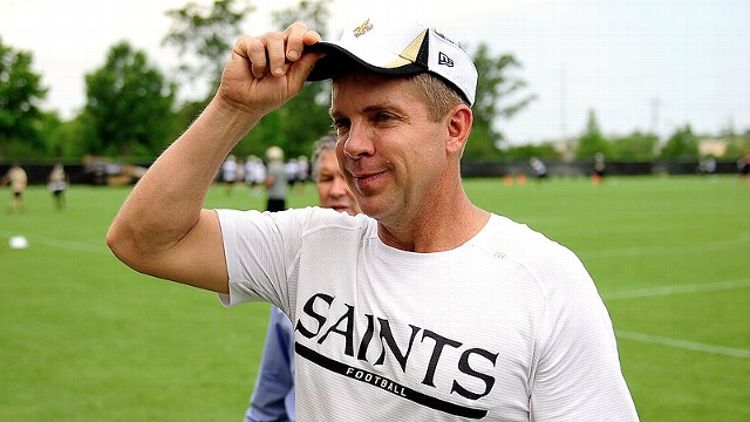 Much of the talk this offseason has been about stopping the read-option, but in Sean Payton’s year away from the NFL, he had trouble with a much different offensive attack: the single wing.

During his Roger Goodell–mandated suspension from the Saints, Payton spent his time coaching his son’s sixth-grade pee wee football team, the Liberty Christian Warriors, who eventually went to the league championship game. The Warriors lost just two games all season, but both of those losses came against the same team, the Springtown Orange Porcupines.

For those familiar with Sean Payton, it shouldn’t be a surprise that he took this seriously (well, at least mostly seriously). After losing to the Porcupines 38-6 in the regular season, Payton enlisted the help of some rather noteworthy former NFL coaches to help devise a plan that could slow down Springtown Orange’s offense. It didn’t work: Payton’s Warriors lost 58-18.

After the game, a gracious Payton spoke to both teams. “We spent all week, we talked to Bill Parcells and Jon Gruden and asked them how to defend the single wing,” said Payton. “You have no idea how much time we spent. You guys put 58 points on the board.”

The single wing is, in many ways, football’s original formation. Although hard to imagine now, there was a time in the NFL when using a quarterback under center was considered a gimmick, and nearly every team used some version of the single wing and other “direct snap” formations. All that changed after the Chicago Bears, coached by George Halas, destroyed the Washington Redskins 73-0 in the 1940 NFL Championship Game and Chicago’s “T-formation” rapidly became the norm. But the single wing has not completely died out from football.

In particular, youth football has seen a resurgence of this most old-school of old-school attacks, as the combination of misdirection and overwhelming power — and the lack of a need for a sophisticated passing game — makes perfect sense for a bunch of fifth- and sixth-graders. (Many pee wee football leagues are named after Glenn “Pop” Warner, the coach often credited with inventing the single wing.) Rob Adams, Springtown’s coach and a former TCU offensive lineman, went to the single wing after failing to find success using more modern schemes. Adams runs a version of the single wing attack developed by a youth coach named Dave Cisar, though Adams’s brand is also heavily influenced by what he learned while playing for the man he calls a “surrogate father,” his college coach, Jim Wacker.

In the traditional single wing, a few elements are combined into an attack that dominated football for decades and forced defenses to evolve in ways that remain crucial today: (1) some form of direct or shotgun-style snap, instead of an under-center exchange; (2) an unbalanced line, with more blockers to one side than the other; (3) an emphasis on “power” plays, which outnumbered the defense at the point of attack; and (4) a bevy of shifts, ball fakes, crisscrossing players, and all manner of misdirection.

Adams’s team has 12 plays, with names picked by his kids to help them remember their assignments: “Power” is “Pizza” and “Spinner” is “Spaghetti,” and so on. The important thing is not so much the plays but how they are taught and how they fit together. “We have a counter for every run, and a fake off of every counter,” says Adams. Before going to this system, Adams says he’d “never won anything” in football, “at any level, including in college.” But since taking over at Springtown Orange, he’s turned the team around in just a couple of seasons, bringing home their first title last season. If it’s good enough to beat Sean Payton, with the assistance of Jon Gruden and Bill Parcells, does that mean Cisar, Adams, and others are onto something big?

Suggesting that, of course, seems absurd. Youth football and the NFL are obviously night-and-day different; it’s laughable to suggest that because the single wing won a sixth-grade championship it could win a Lombardi Trophy, so laughable that no one would suggest it. No one, that is, except Vince Lombardi: “What would happen if someone came out with the single-wing offense?” Lombardi once asked. “It would embarrass the hell out of us.” And Lombardi wasn’t alone. Roughly 20 years later, fellow Hall of Fame coach Bill Walsh once said he’d “reflected on the single wing,” and, in his view, “those blocking schemes would just chew up NFL defenses. You could double-team every hole and trap every hole.”

Yet I think it’s safe to say the single wing, at least as a fully developed system as run by Adams, won’t be the hot new (old?) thing in the NFL. Although many say that football is cyclical, that’s actually only rarely true: Sure, some concepts or plays disappear for a while and then come back, but when they do they’re always adapted for modern times — the original versions vanished for a reason, often a defense’s reaction.

Yet there is a kernel of wisdom here. There are many, many ways to be successful in football, and it wouldn’t shock me at all to see elements of the single wing slowly find find their way back into NFL offenses. Maybe we see more unbalanced sets. And an increasing use of misdirection seems quite likely as well. As much as any time in the past 10 years, NFL coaches now seem willing to try all manner of new ideas. Maybe the single wing will be among them, maybe it won’t. Maybe the fact that Payton, Gruden, and Parcells spent time thinking about how to stop a sixth-grade football team matters. Maybe it didn’t at all.

Until the season starts, all we’re left with is an experience a bunch of youth football players will never, ever forget. “It was like fantasy camp for my players and coaches,” said Adams of facing — and beating — a Super Bowl–winning coach. “And Coach Payton couldn’t have been any more gracious to all of us, particularly the kids.”