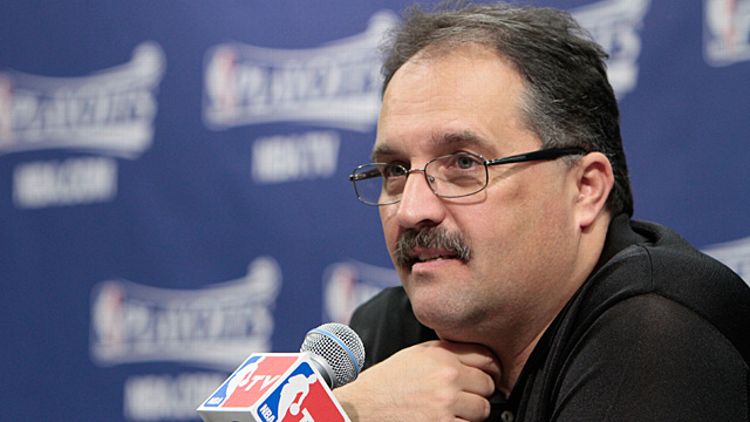 This summer, after he was fired by the Orlando Magic, Stan Van Gundy, a man who’d spent the previous three decades keeping a basketball coach’s long hours, suddenly found himself with a lot of time on his hands.

After his Orlando exit, Van Gundy and his wife didn’t want to leave Florida, where three of their kids were still in school and the fourth and oldest had just transferred to go to college. But coaching for the Miami Heat, which he’d left in 2005, or the Magic was obviously out of the question.

Having the time to shuttle his kids to and from baseball games and horseback riding lessons was nice. But he still wasn’t filling his days. Until, that is, he found the Seminole County public school system.

The Van Gundys had chosen to live in the compact bedroom community just north of Orlando because they wanted their kids to go to good public schools. Both of his parents hold advanced degrees in education, and Seminole is one of only 10 counties in Florida to have received an “A” rating every year since 1999, when the state started handing out grades. So Van Gundy was shocked when he found out that the stellar reputation was at risk.

“I honestly had no idea how bad things were,” he says.

In August, after returning home from a family vacation to Alaska, Van Gundy accepted an invitation to a meeting of an obliquely named political group called Citizens for Preservation of Property Values. Going in, he had little idea what the group stood for or what it aimed to accomplish. So he was more than a little surprised to find that, at the end of the meeting, he’d been elected as its chairman.

“I say this jokingly, but everyone else on the committee already had a job,” he says.

The committee’s goal was simple. It wanted Seminole County voters to increase their taxes by $1 for every $1,000 in property value in order to raise $100 million for the school district over the next four years. Although it had been started by a few local businessmen who wanted the district to have more money to hire and recruit new teachers, it was now being led by a workaholic quickly getting himself up to speed.

In meetings with the district’s superintendent and budget director, Van Gundy discovered that Seminole had been doing everything it could to keep things normal in the classroom while it cut elsewhere. It already did more with less than almost any county in Florida — Seminole is ranked 61st out of 67 in the amount it spends per pupil. But the recession had forced it into an even tighter squeeze.

With a budget that was $73 million lighter than in 2008, Seminole had delayed buying new computers, fixing up old school buses, and replacing the energy-inefficient Freon-based air conditioning units that constituted a major money-suck in one of the country’s hottest states. Even with all of those holes patched, the county had still been forced to lay off more than 700 people, equivalent to roughly 10 percent of its entire payroll, including 50 teachers within the past year. Without the referendum and the cash it would return, Van Gundy learned, there would only be more cuts.

A lifelong political junkie who had long considered a run for local office after the end of his coaching career, Van Gundy started campaigning in earnest. He attended breakfasts at the Rotary Club, wrote op-eds for the Orlando Sentinel, and went to council meetings in every town in the county. And it was there he discovered that the criticism faced by a professional basketball coach is nothing compared to the abuse heaped on local politicians.

Van Gundy was called a puppet for special interests because a few of his campaign’s smaller contributors had done business with the school district. The day after he held a fund-raiser at a local sports bar he was forced to defend the decision to raise money for kids at a place that offered alcohol. (No minors were served, of course.) What’s worse, he watched small-town pols attacked and called names that surprised even a man who had previously performed his day job in front of rabid sports fans. All of which soured him on the idea of ever working for a campaign again, let alone being at the center of one.

“There’s no chance you’ll see me even run for PTA president after this,” Van Gundy said. “These people are nuts.”

For Gavin Maloy, one of Van Gundy’s opponents, that may come as a relief. Maloy is a former county commissioner who owns an ornamental nursery and opposed the tax increase. To him, Van Gundy was well intentioned but out of his element.

“I’m sure Stan knows how to coach basketball,” he says. “But I don’t know what qualifies him as an expert on education reform.”

Yet even Maloy admits that Van Gundy was a quick study. Even though Seminole leans conservative — it supported Mitt Romney over Barack Obama — Van Gundy’s referendum passed on Tuesday with a solid majority of 56 percent. And nowhere was the ex-coach’s newfound political acumen more evident than in his ability to fund-raise.

In total, Van Gundy’s campaign brought in over $130,000, a treasure chest compared to Maloy’s $5,000. Some of that came from Van Gundy himself — for a time he and his wife were the campaign’s largest contributors, after having thrown in $15,000. But more credit goes to his ability to milk former players.

Last month he helped auction off game-worn shoes from J.J. Redick and Jameer Nelson. And in the final weeks of the campaign, Van Gundy learned that he was no longer the committee’s largest donor. That title belonged to new Los Angeles Laker Dwight Howard, seen by many as the reason Van Gundy lost his job, who wrote a check for $50,000.

When asked how he got the big man to sign such a large check, Van Gundy explains that it was a simple appeal to self-interest: Howard is keeping his home in Seminole County, and therefore still has a stake in the quality of the schools. All of which makes it clear that even though he no longer wants to be one, Van Gundy may have made for an excellent politician.

Caleb Hannan (@calebhannan) is a freelance writer living in Denver who’s written for Bloomberg Businessweek, and The Village Voice,