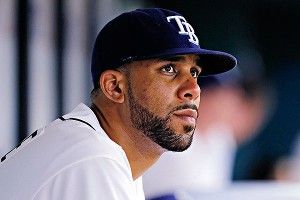 Coming into Monday, David Price was the leading contender for the American League Cy Young Award. His 2.28 ERA led the major leagues among qualified starters, and he’d given up just two runs over 30 innings in August. His strikeout rate was just south of nine per nine innings, above other hopefuls like Felix Hernandez, Chris Sale, and Jered Weaver, and just below Justin Verlander. He had 16 wins, the most in the league, and for better or worse, wins matter. He’d also spearheaded Tampa’s August surge up the AL East leader board, another circumstantial fact that wouldn’t hurt his candidacy.

And then Monday happened. Price gave up six runs in four innings to the best offense in baseball and the Rays lost to the Rangers. His ERA jumped to 2.53, and his strikeout rate fell below Chris Sale. At the same time, 2010 winner Felix Hernandez was in Minnesota, throwing a five-hit complete game shutout. His ERA fell from 2.55 to 2.43, and he improved to 13-5 on the season. A few wins short of Price, sure, and his strikeout rate wasn’t quite as high — but every other statistic, from Wins Above Replacement to home run rate to walk rate to FIP (a metric like ERA that tries to eliminate the influence of fielding) to WHIP, favored the Mariners ace. In one night, Price went from an odds-on Cy Young favorite to an underdog.

And that’s just the beginning. Tonight, the other three contenders — Justin Verlander, Jered Weaver, and Chris Sale — take the mound. Verlander and Sale could easily pass Price in all the sabermetric categories, while Weaver could notch his 17th win to become the most marketable candidate on the board. Nothing characterizes this year’s race better than that basic reality: A great pitcher like Price may go from first to fifth in the span of two nights. So let’s take a look at the current power rankings and examine what each player has to do to win.

Note: For our purposes, we’ll ignore Fernando Rodney, the Tampa Bay reliever with a 0.77 ERA in 58 IP. Despite his terrific season, there are too many good starters this year, and, in my mind, he can’t win even with a perfect finish.

Cy Young voting is not as superficial as it’s historically been — just look at King Felix’s win in 2010 with a 13-12 record — and that’s very bad news for Weaver. He doesn’t stack up well against the other contenders once you get past the very basic stats, ranking fifth in strikeouts, home runs allowed, ERA, FIP, and WAR. He also leaves the game after 6.1 innings in a typical start, worst in this group. To have any real shot at the award, he needs to clean up in the superficial categories and win the perception battle. That means he needs to be the only pitcher in the AL with 20 wins (a real possibility), and the Angels have to make the playoffs. That still wouldn’t be enough normally, but Weaver has a couple strange numbers tilting his way — he allows the fewest base runners and has the lowest opponent batting average. If he can close out with five or six great starts, get the ERA down near 2.50, and pitch himself as the guy who led the Angels to the playoffs, the Cy Young is still in his sights.

The question “Who’s Chris Sale?” is the biggest obstacle between Chris Sale and the Cy Young. It’s a shame because he’s truly great. The tall, lanky lefty has incredible movement on his pitches, and people love to compare him to Randy Johnson. In terms of the race, he’s probably better placed at third in terms of the sabermetric stats, but since superficial numbers and perception still count, I’ve still got him slightly behind Price.

But that might be changing, especially with his dominant 7.2 inning, three-hit performance last week against the Yankees. The path to the Cy Young for Sale is fairly straightforward — he needs 20 wins. He’s missed a couple starts here and there with minor injuries, so he can’t catch Verlander in the strikeout department, but it’s not out of the question for him to lead all candidates in strikeout rate. (He’s currently second.) If he manages those two feats and brings his ERA below 2.50, he’s got a shot. The problem is that before the Yankees start, he suffered through a mini-fade during July and August. If he scuffles even once, his chances are essentially over.

ERA was Price’s greatest strength as of yesterday, when it was 2.28, but now that it’s back above 2.50, his chances of besting Verlander or Hernandez from an advanced stats perspective are slim. His FIP probably won’t catch up, his WAR definitely won’t, and Tampa’s difficult end-of-season schedule means his ERA lead might be lost forever. He’ll also never catch Verlander or Felix in total strikeouts, a byproduct of his lower aggregate inning count and his relatively low 6.2 innings per start.

That’s the bad news. The good news for Price is that he has a major lead in the superficial perception campaign. Take a look at ESPN’s Cy Young predictor, for one. Even after last night, Price has a significant lead, due to the fact that the predictor gives heavy emphasis to wins and divisional standing. Yeah, that’s all dependent on factors out of the pitcher’s control, but we don’t live in a perfect world and these things still matter. So, what’s the path for Price? Like Weaver, he has to win 20 games and Tampa has to make the playoffs. If he can pull that off, he’ll finish in the top two. At that point, the race would become a test of the voters’ sophistication. If 2010 was a sign that they’re truly enlightened, Price is dead in the water. But if wins and overall team success haven’t completely lost their shiny allure, then sure, call Price the favorite.

Notice the 1b. At the moment, Verlander and Felix (who, incidentally, have won the past two Cy Youngs) are neck-and-neck for the title of best pitcher in the American League. Verlander owned the top spot for a long time, but a late and brilliant charge by Hernandez has made him a close second. That could change after tonight’s start. And make no mistake, the duel with Felix really, really matters. A narrative is emerging: It’ll be a statistical darling versus a superficial darling for the award — Verlander and Hernandez are fighting for the former, while Price leads Weaver in the latter.

The key to Verlander’s campaign is very simple; finish with the most strikeouts (he’s second right now to teammate Max Scherzer) and the lowest ERA (only Felix bests him in the AL). Anything less, and his unimpressive record, plus the fact that he won last year, will likely be too great a hindrance. But regardless of how it plays out, it’s important that non-voters understand how great he and Felix have been. Nobody else lasts into the eighth inning on an average start, and nobody else has racked up so many incredible stats in so many innings. The Cy Young will go where it goes, but the truth won’t change.

If you believe in momentum, King Felix is going to run away with the Cy Young. He’s allowed just five runs in 41.2 innings in August and thrown in three complete game shutouts for good measure. One of them, you might remember, was major league baseball’s 23rd perfect game. Since July 14, he’s thrown four complete game shutouts and lowered his ERA from 3.13 to 2.43. Now, his overall stats are the best in the league, though Verlander is just inches away.

Are there minor quibbles? Sure. He doesn’t strike out as many batters as Verlander, and his home/away splits indicate that he gets at least some help from playing in pitcher-friendly Safeco Field. But those are passing shadows on a gorgeous day, and if he duplicates his August success in September, nobody’s going to catch him. I’ve been watching Twitter over his last couple starts, and the reactions confirm what I’ve felt — he’s becoming a force of nature, and neutral fans are tuning in to games like Seattle-Minnesota despite the total lack of playoff implications. We just want to see him pitch; it’s exciting and almost beautiful.

The race is his to lose, and only a heroic effort from Verlander can stop the King’s rise.

Congratulations to Kareem Abdul-Jabbar on His New Statue

The Huddle: The Rams' Draft Problems and the Return of the Karlos Dansby Leadership Council