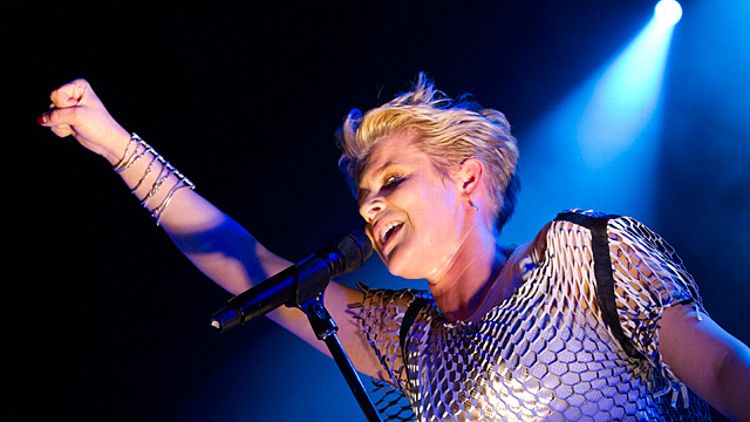 It’s been nearly two months since the NHL lockout began. NHL players continue to head overseas. The 2013 Winter Classic will now take place in 2014. In an environment as borderline dystopian as this, there’s only one thing for hockey fans dancing on their own to turn to: Robyn.

What began as a whimsical Twitter back-and-forth between Yahoo!’s Harrison Mooney and The Sporting News‘s Sean Gentille has become THE most important piece of lockout propaganda this fall. The pair’s lyrics to “Call the Union,” a takeoff of the Robyn song “Call Your Girlfriend,” was already impressive on paper. “You just tell ’em that the oooonly waaaay the lockout ends / is 50/50 there and then … “

On YouTube, though? It becomes … something else altogether. I chatted with Mooney, a writer for the Vancouver Sun and Puck Daddy, about his breakout performance.


How many times did you watch the original Robyn video to prepare for this undertaking?
About 50 over the span of four days. The only way this was going to work is if it was really, really clear that I was mimicking Robyn’s video. Like, if I just danced SORT OF like her and people didn’t get it, then I’m just a weirdly effeminate guy doing weirdly effeminate things. But if I’m badly dancing Robyn, it’s forgivable and/or funny.

Which dance moves were the most difficult to perform?
The hardest thing, and the thing I totally butchered, was the breakdown. It’s hard to follow her since the lights are strobing and whatnot. But the thing I dreaded most was that backwards somersault into the butt thrust, because I’m about 78 percent butt and making that obvious to everyone was not ideal.

Do you think Gary Bettman would enjoy this video? What about Donald Fehr?
I think being Gary Bettman would improve the viewing experience exponentially, because while we couldn’t afford strobe lights, he blinks so much it achieves the same effect. But I’m sure both would say they liked it since they really want me to like them right now.

Was there ever any threat of arrest during the filming of this?
Actually, yes. We started filming in the parkade across the street from the Vancouver Sun, and after the second take, the parkade attendant came up to our level and told us that if we didn’t stop he’d have to call the police. The last thing I wanted was to be arrested in those capris, so we moved.

Where did you get those, um, capris?
The pants were from the Salvation Army and they cost me $7. I wanted more colorful leggings, but I was unwilling to pay anything beyond thrift store price. And they were the first pair of pants that (a) fit my body, which, as mentioned, is 78 percent ass, and (b) effectively hid my thunder.

Did you consider wearing a mohair hockey sweater to really sell the resemblance?
Yes. Unfortunately, the NHL store’s mohair selection is really thin, which kind of surprises me considering it would be in keeping with all their other misguided attempts to appeal to female hockey fans.

The NHL and the NHLPA are said to be meeting again tomorrow following a “secret meeting” at an “undisclosed location” over the weekend. Whatever happens, co-lyricist Gentille explained that there’s a lot of similarity between the messages of the two songs.

“Robyn’s song is about getting what’s best for yourself without leaving utter wreckage on the other end,” he told me. “And convincing someone that the pain you’ve created isn’t just inevitable — but necessary.”

About Last Night: It's Election Day!