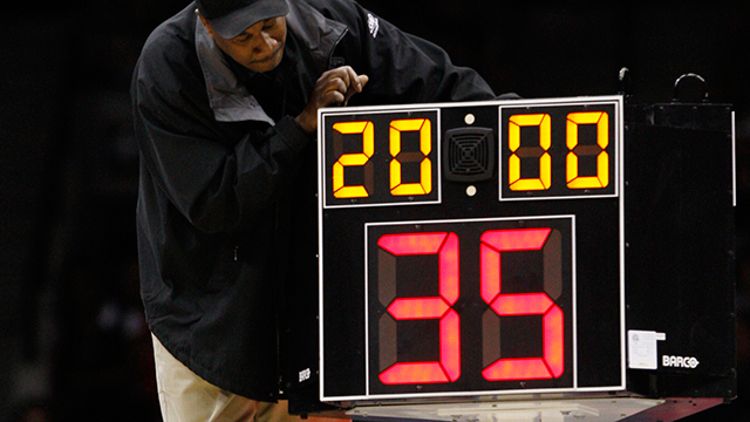 This was an exceptional year for college basketball, in the sense that you had to be an exceptional obsessive just to enjoy an average game. The wonderful championship battle between Louisville and Michigan was a happy fluke, a last-ditch saving grace for a season when scoring dipped to levels not seen since 1952, an era of short shorts and underhand free throws when there was no shot clock and no 3-pointer.* Overall field goal percentage hit its lowest point since 1964, and there has never been a worse year for 3-point shooting. Somehow, the game stopped being fun.

*If you’re curious about what gave scoring a boost the next season, it was a rule change that prohibited teams from opting out of free throws if they preferred to take the ball at half court.

I love college basketball, and would probably still watch the sport if they imposed a 5-foot-4 height limit and made the players use a beach ball and oven mitts. But last season even I could see that the quality of play was in the midst of an awful tailspin. Back in February, I made some suggestions about how the game could be improved, pinpointing two main problems along the way:

1. The pace of in-game play is too slow. Total possessions are the lowest they’ve been in years, a product of certain teams milking the shot clock (far too long at 35 seconds) on offense and playing the kind of aggressive (read: constantly fouling) defense that inhibits offensive movement and makes it tougher to find a good shot. As Rex Chapman noted in a tweet on Wednesday, the physicality of the college game far exceeds the NBA, and it’s killing everything we love about the game — team scoring, transitional flow, displays of individual brilliance.

2. The pace of out-of-game play is too slow. Because of endless referee reviews, too many timeouts (it’s all too common to see teams with a combined seven or eight timeouts with less than three minutes on the clock in a close game), and intentional fouling, the conclusion of tight games became eternal and anticlimactic. I used a Kansas–Oklahoma State game as an example, and found that the last three minutes of regulation took 17 minutes in real time, and a five-minute overtime session lasted 24 minutes.

I am by no means the only one noticing these trends. Rick Pitino, for one, spent a lot of time at his Final Four press conferences talking about how the style of the college game had deteriorated:

When you coach in the Big East, you should wear body guard. Peyton wears body guard, shoulder pads, because you can’t cut, can’t move. The referees are caught in a quandary. They’re saying, “We’re going to ruin the game, we’re on TV.” Jay [Bilas] is 100 percent right, if we want to get back, take a page out of the NBA, have freedom of movement.

I always liked to watch the old films of Clyde Frazier and you don’t see defense touch anybody at all. Everybody cuts and passes, freedom of movement. That’s what we got to get back to. The only way to do it is the first 10 games of the season, the games have to be ugly and the players will adjust, then you will see great offense again.

He was by no means alone. So when the NCAA rules committee met in Indianapolis last week, they had the chance to make a real difference. And there was buzz. In an ESPN story preceding the gathering of the brain trust, it was reported that the committee would “vote on moving the shot clock from 35 to 30 seconds.” Not a cure-all, of course, but a great start. The article polled 37 coaches, and the majority were in favor of shortening the shot clock, including — are you sitting down? — WISCONSIN’S BO RYAN. That just about staggered me.

So what happened in Indianapolis? Well, let’s allow yesterday’s headline to speak for itself:

Surely you are playing a grand jest on us, Andy Katz, you inveterate, unrepentant prankster!

Because college basketball is in crisis, and the rules committee can change the rules only once every two years, so surely the main thing they accomplished this week wouldn’t have been something that actually fucking prolonged the game, right? RIGHT?!

But no. That’s what they did. Their big change was that refs can now go to the monitor in the final two minutes to review out-of-bounds calls or shot-clock violations. And instead of waiting for a TV timeout, they’ll now be stopping the game in its tracks in the final four minutes if someone makes a shot and they can’t tell if it was a 2 or a 3.

To get metaphorical for a second, imagine college basketball were a man in tattered clothing, crawling in the desert and dying of thirst. The rules committee recognized his suffering, dropped in from a helicopter, and offered him a cupful of salt.

But what about the shot clock? Wasn’t there supposed to be a vote? Surely there was a reason why it never even made the committee’s agenda. Let’s see what they had to say about that:

Rules committee chair John Dunne, the head coach at St. Peter’s in New Jersey, said Thursday after concluding the three-day meeting in Indianapolis that surveys of coaches in Division I, II and III failed to bring a consensus on whether to change the shot clock.

“There wasn’t a vote taken since it was a 50-50 split, so we felt it wasn’t the right time to go in that direction,” Dunne said.

Right, right, that makes sense. It’s a divisive issue, and at least half of all surveyed coaches (and way more in the initial ESPN survey) were in favor of changing the clock, so the logical thing to do is not have a vote. I get it.

Sorry for excessive italics and bold there, but that is an absolutely absurd justification by Dunne. Let’s rewrite his words three ways to really explore the cockeyed reasoning:

1. “It’s too close to call, so we’re going to just declare a winner and move on.”

2. “Support is about equal on both sides — it could go either way — so there’s no need to vote.”

3. “I’m John Dunne, and I don’t understand basic principles of math or the democratic process.”

You know what happens when governments use this kind of logic? Revolution happens. Or tyranny. Either way, people are unhappy. But in college basketball, the oligarchy cannot be challenged.

The only positive to come from the rules committee is that they changed the charge/block rule to favor the offense. Now, the defensive player has to be in position with both feet set before the offensive player “starts his upward motion,” rather than when he leaves the floor. This is a good rule change that may actually increase scoring, and I have no complaints. But it’s the most minor of the possible changes they could have made. It’s like throwing a vase of flowers out a cargo door when you need to cut weight from a sputtering airplane. It fixes a stupid rule, but it won’t have a meaningful impact on the important issues plaguing the sport.

There’s no way to spin what happened this week — the rules committee failed at a time when we really needed them. It will be spring 2015 before they have another chance to amend a broken game, and by then, college basketball could be in a truly sorry state. If you’re reading this, and you’re a fellow die-hard fan who can’t look away, let’s take a moment to pity one another. We’re in for two years of hell.