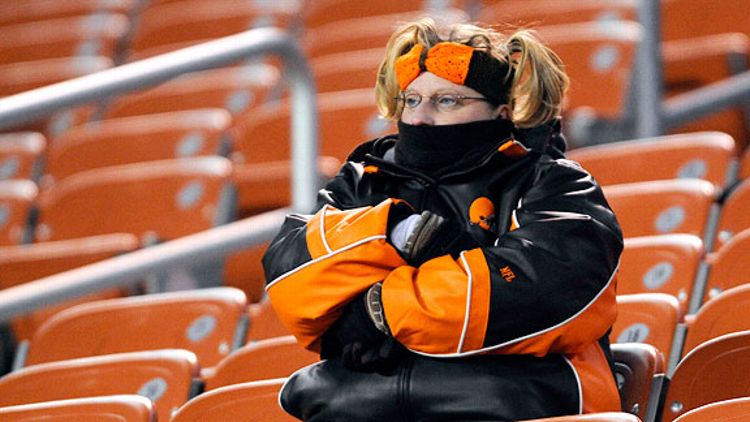 Over Labor Day weekend, 10 of the ablest minds at Grantland briefly stopped typing their own names into a Google search bar and devoted themselves to a sad question: Which city’s fan base is enduring the roughest stretch in sports right now? Where should the sympathetic among us direct our pity? Or, for the cruel at heart, our Schadenfreude?

Each member of the Most Depressed Fan Base Committee selected their top eight cities, based on factors known only to them, and point values were assigned on a 1-8 scale (most depressed earns eight points, least depressed earns one). The individual lists were then compiled into an overall ranking, which is presented below.

Before we get there, though, some clarification. We’re concerned with which cities are suffering now, at this exact moment in time. As William Faulkner once wrote, “the past is dead.” (I’m reciting that one from memory — hopefully I nailed it.) For example, the Red Sox World Series drought is irrelevant because it ended, while the Cubs drought holds weight because it’s ongoing. You get the idea.

In case you were curious, Lubbock came from Chuck Klosterman, and it came without explanation. But his e-mail signature is a picture of Mike Leach as God in a parody of the “Creation of Adam” painting, so maybe that explains it. (In the painting, Chuck replaces Adam.)

Hey, what do you say we get to that list?

Best Line About a City That Didn’t Qualify

Toronto got two votes, neither of which came from Joe House. But he did have this to say:

“Not Applicable: Toronto. Best strip clubs in North America (according to reports); Who cares about their teams?”

Can you really call them “reports” if they come from a personal diary you keep in a locker at the airport? Also, quick idea for the editors on a future post: Most Depressing City for Strip Clubs. Could be a traffic monster.

Washington, D.C. (10 points), Buffalo (10 points), Portland (11 points)
I was particularly surprised that Buffalo isn’t in the Top 10, because man, the place is sad and cold. They have just one two professional sports teams, terrible weather fronts constantly attacking from Lake Erie, and a failing economy that even Detroit respects. Or, as Katie Baker put it, with Buffalo fourth on her list:

10. Kansas City — 12 points
Only three voters had K.C. on their list, but Jay Caspian Kang boosted it to the Top 10 with a second-place ranking. Now, I hate to introduce controversy in the first installment of The Most Depressed Fan Base, but I can’t ignore this: An anagram of Jay Caspian Kang is “I C Jay. Gasp! Kansan!” (I used an extra “s” there, but it’s still worth checking out.)

Anyway, the Royals won a World Series in 1985, but they’ve finished the season above .500 just once in the past 15 years. The Chiefs have been mostly disappointing for the past few decades, though they did make the playoffs last season. A worthy no. 10.

I hope he’s happy; we just lost nine readers. Wait, no, my mistake. If those fans owned computers, they’d be able to check the standings and avoid Marlins games. We’re OK.

8. Columbus — 16 points
Back to Mr. House, who had Buckeye Central second on his list:

“Columbus: Life-lesson that most folks learn once & never forget but apparently needs to be repeated in central ohio: never never NEVER trust a dude in a sweater vest.”

Between this and the strip club thing, remind me to never ask Joe House about his childhood.

7. Los Angeles — 16.5 points
Of the four committee members who included LaLaLand on their list, one grew up in the city and the others live there currently. Who says people in L.A. are egocentric? Jonathan Abrams put them at the top of his list, with this justification:

“Los Angeles—USC is playing another season of only exhibitions, people are scared to go to Dodger Stadium, the Lakers were ousted early from the playoffs and the city still has no NFL team.”

“No football team, Lakers a mess, Dodgers broke, Angels have a fucking monkey for a mascot and there are barely any sports fans to share your depression with.”

Fair enough. Seriously, though, if I were a Buffalo fan, I might punch a wall at this point. Or at least write an angry tirade about Kobe Bryant on a message board. And that takes some effort in Buffalo; the Internet hasn’t caught on, so they have to use actual wooden message boards in the town square.

“If a cowbell rings in an empty Arco Arena, do you still hear it?”

The sad part is, that cow is next year’s starting power forward.

5. Indianapolis — TIE — 17 points
It only made three lists, but enjoyed passionate support from Chris Ryan and Sarah Larimer, who each ranked it first. When I pressed Sarah for comment on Gchat, this is what I got:

my uncle chuck is the weatherman there
on the tv.
pretty weird little larimer fact.
people come up to him all the time
and talk to him about the weather
someone named their cat after him

She claims this is true, but it could easily be a bit of dialogue she stole from a creepy David Lynch film. You have to be careful with her. Chris had a more pointed take:

“Peyton’s neck, no Pacers (a nation mourns) and Notre Dame got tagged by South Florida, at home, losing to the son of their last good head coach. I know South Bend isn’t Indianapolis, but I think when Notre Dame cries, so cries the state of Indiana.”

4. Minneapolis — 27 points
Now we’re getting into the heavy hitters. We had some golden material here. From Simmons, who ranked them first:

“Mauer/Morneau + Kahhhhhhhn + they’re on a 2-year streak of getting stuck with washed-up All-Pro QB’s + five decades of Vikings heartbreak + LA is building a new NFL stadium. Not a lot to work with.”

“For the same reasons as Seattle, but the weather is worse and sadder.”

Out of the four ballots to include Minneapolis, three labeled it “Minnesota.” Chuck Klosterman was the only one to get it right. Doesn’t that make it a few points sadder?

3. Cincinnati — 31 points
Cincinnati made all but two ballots, but it was consistently ranked low. Only Jonathan Abrams put the Cincy in the Top 3.

“Cincinnati – Reds aren’t making the playoffs and the Bengals will be lucky to win four games.”

“Because the Bengals are the worst team in the NFL, by A LOT. Silver-lining: This year’s dirty-diaper-of-a-season means Andrew Luck could be in town next year.”

“We should have just made Ohio its own entry.”

THAT DIDN’T STOP YOU WITH MINNESOTA, DID IT, YOU GROUPING SON OF A BITCH!

“The only thing they have going is the NBA lockout and Tarvaris Jackson interception over bets.”

“The long-sufferingness is still going on and has no end in sight. Right now they’re trying to rally around a Seahawks team led by Tarvaris Jackson. There’s nothing sadder than no hope.”

This last take was inadvertently confirmed when I told my friend Spike, a lifelong Seattle fan, that his city had placed second. His reply:

“Here’s the thing; the Sounders could actually quad trophy. MLS Cup, Supporter’s Shield, US Open Cup, CONCACAF Champions League. They could also get no trophies, but a quad would be a game changer.”

You’ll have to decide for yourself if that’s a valid argument, or the sports equivalent of a beaten-down alcoholic praying over a lottery ticket.

1. Cleveland — 45.5 points
The city on the flaming Cuyahoga won in a squeaker. Which is more than any of their sports teams can say, amirite?

Take it away, Katie Baker:

“Cleveland: because someone wrote into the Bake Shop with this: ‘LeBron certainly squashed any chance of the Cavs winning it for at least 5 years, the Browns look to be on the up and up but thats the same thing my Dad said when Paul Brown started the franchise, and the Indians just signed a 41 year old Jim Thome to save our playoff hopes.’ and it broke my heart.”

By the way, the Bake Shop is Katie’s mailbag feature, not an actual bakery she steals mail from. Jacoby had this to add:

“Cleveland: still butthurt over LeBron. Are the Indians still in the American League? I forgot. Browns trainers just still around with 9-1 dialed just waiting for Colt McCoys inevitable MCL snap. On the bright side, it is a fitting place to be depression drinking.”

That’s one hell of a bright side. Also, I love the idea that Browns trainers respond to player injuries by dialing 9-1-1. Somehow, I can believe it.

So, congratulations are in order for Cleveland, the saddest sports town we know. Come back next month to see if they can defend the heavy crown.