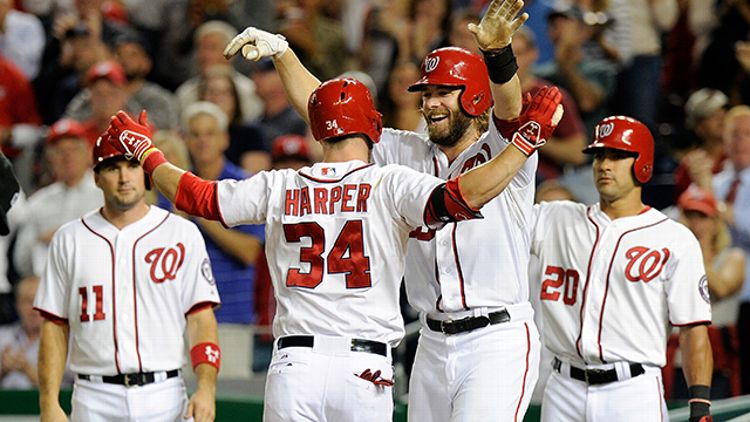 Only two more weekends left in the regular season, and to use one of my favorite clichés, these guys have EVERYTHING to play for! Let’s get to it.

10. How the Nationals Will Destroy the NL Central (MIA-WAS)

At exactly the moment in the season when it was pretty much too late, the Nationals started winning like fiends. Going back to September 3, they’ve put together a 13-3 streak and salvaged a very remote chance of snatching the final wild-card spot. It’s still a huge long shot; with nine games remaining, they find themselves five back of the Reds. We’re at the point where one Reds-win-Nats-lose night will basically sink them. On the other hand, the Reds have six games remaining against the Pirates, and as long as Pittsburgh has a shot at the NL Central title, thus avoiding the wild card, they won’t be laying down for anyone. The Nationals don’t have it much easier, finishing with the Pirates and Diamondbacks, but they do have three games against the Marlins this weekend. In theory, it’s not insane to imagine that they could be two back with six to play on Monday. And that’s a very different outlook.

So, this is how the Nationals could destroy the NL Central. First, they finish in a tie with the Reds for the final playoff spot. That would result in a one-game playoff. If the Nationals won that, they would then play the wild-card game against whoever loses the Pirates-Cardinals battle for the NL Central … for argument’s sake, let’s say the Pirates. If they won that game, and St. Louis maintained a lead in the standings over the Dodgers, the Nats would then play the third NL Central team in the divisional round. It could be a clean sweep! Five games, and a whole division destroyed! If that happened, I would add the NL Central massacre to this Wikipedia page over and over until they let it stay.

8. Made in the Shade in Believeland (HOU-CLE)

It’s been fairly obvious for a while that Cleveland’s easy end-of-season schedule would make it tough to keep them out of the wild-card spot (called it!), but it has happened even faster than we expected. And not totally because of the Indians themselves. They’ve done well, winning six of eight, but they dropped two of three to the last good team on their schedule (Royals). At the same time, the Rays and Rangers have been in dual disaster mode, splitting against each other and looking pretty shabby against everyone else. So with nine games left, the Indians’ catch-up train looks like it’ll arrive ahead of schedule. They’re just a half-game back of both the Rays and Rangers, and will be playing three games against the worst team in the American League. After that, they finish up against the second- and third-worst teams in the AL, the White Sox and Twins. All of which means that they’ll probably be in wild-card position by Monday, and they’ll never look back.

In a wonderful turn of events that inspired the entire country in early September, the Angels split their four-game set with the heartless Tampa Bay Rays juggernaut, keeping the plucky, upstart Yankees within view of the final playoff spot. That didn’t quite work out, but the gesture was noticed. They kept up their spoiling ways against Texas with a series win, and just took two of three from the A’s in Oakland. Come Monday, they have a chance to do it again to Oakland and Texas in succession, depriving them of home-field advantage and a wild-card spot, respectively. That’s a lot of impact for a sub-.500 team, and they’re 19-7 since August 23. All of which means it’s worth watching them take on the Mariners this weekend; this team is playing some gooooood ball.

Mike Trout could even spoil things on an individual level, if the MVP voters decide that his baserunning and defense are enough to overcome the fact that Miguel Cabrera out-hits him in every possible category. And finally, as a last spoiler, I believe the Angels may try to spoil the Los Angeles water supply with poison, because Mike Scioscia is evil.

6. Pitching Matchup of the Weekend: Latos vs. Liriano (Friday, CIN-PIT)

Not a great weekend for pitching matchups, so let’s talk about an arcane ongoing statistical situation instead.

It’s a given that with a 16-7 record and a 2.92 ERA, Francisco Liriano has been one of the best pitchers in the National League this season. Sure, he walks too many people, but he gets a lot of strikeouts, too, and he has amassed his numbers while giving up a fairly unlucky .291 BABIP. Interestingly, though, he’s not “qualified” in a statistical sense because of the injury that kept him out through all of April. But he’s close, and he’s been close for what seems like a very long time. The standard for being a “qualified starter” is to throw one inning for each of your team’s games, which means that you have to amass 162 innings by the end of the year. Currently, Liriano has 148 IP to his team’s 153 games. Which means that if he pitches six innings tonight, he’ll be qualified with 154 IP in 154 games … for less than 24 hours, until Pittsburgh plays its 155th game.

The basic math here is that he has two starts remaining in the season and needs 14 innings to become qualified. This is mostly a mathematical curiosity at this point, since he won’t win any end-of-season awards, but if he doesn’t reach that plateau, his name won’t come up on year-end ERA lists or anything of the like, now or ever. And here’s a weird possibility: We could have a starter finish 18-7 and still not show up on the statistical leaderboards. We’re rooting for you, ‘Cisco!

Just when it looked like they were down for the count, the Royals reeled off seven wins in 10 games in late August/early September to give themselves a distant shot at the final wild-card spot. They’ve been solid, if not spectacular, ever since. This is a team that won’t die, but it’s also a team with precious few breaths left. The issue isn’t so much the deficit — they only trail Tampa and Texas by three games — as it is the sheer amount of teams they’ll have to overcome. Anything less than a scorching finish won’t be good enough, but if they can win the series against Texas this weekend, they’ve got a nice Mariners–White Sox finish awaiting them. A misstep against the Arlingtonites, though, means the end is nigh.

By the way, KC people, has your team adopted the New Zealand pop song “Royals” yet? Because, and this is coming from someone who hates pop music, it’s pretty awesome. And it would also explore the irony of the team with the longest playoff drought in the sport being nicknamed “Royals.” It’d be sort of like a baseball proletariat battle cry or something.

All of you can go to hell. Our entire first-string offense is on the DL, Joba Chamberlain apparently has compromising pictures of our manager, and we still fought it out to the bitter end. What heart! What aura! What mystique! Now pardon me while I write an infuriating article about how the Yankees missing the playoffs is bad for baseball.

The Dodgers have already clinched their division (and celebrated “Caddies Welcome: 1:00-1:15” style in Arizona), but this weekend should see three more clinch parties as the A’s, Tigers, Red Sox, and Braves reach their magic number. I always like watching the division-clinching champagne parties that happen during the regular season. If you want to get deep about it, those are the best parties, because they represent consistent success over a grueling 162-game regular season. This is one thing that people in Europe do better than us; in the Premiership and La Liga and all the others, they value finishing first in the standings. It’s an equal prize (even greater? I don’t really know enough about soccer) to winning the league cup, their version of the playoffs.

In America, though, our entire sports fan–media complex can best be depicted as a sullen jerk who sits there with his arms crossed saying things like, “They can’t win when it counts.” The postseason is everything, but, in every sport except maybe the NBA, it’s also so dependent on luck. So while drinking champagne after a World Series is essentially a celebration of good fortune and triumphing over a small sample size, the Clinch Party is legitimate and deserved. Drink up, ye heroes of the long haul!

Two facts about these teams.

And tonight's #Rays–#Rangers pennant fever crowd at the Trop: 13,550

Two: People in Baltimore love it when you ask them if they’ve seen The Wire. It’s a terrific icebreaker.

River One (Metaphorical Ohio): Pittsburgh and St. Louis (and hell, even Cincinnati) desperately want to avoid the wild-card game. These three teams have survived the toughest division in baseball, and all three are likely to make the playoffs. But two of them will have to play a single game — a single f—ing game— to keep their season alive. It’s harsh, it’s agonizing, and it’s even a little sad. There are a lot of teams in the American League right now who would kill for a wild card, but it’s anathema to the NL Central triumvirate. At the moment, St. Louis leads Pittsburgh by a game and Cincinnati by two, and you know the Cardinals love that the other two have to play each other while they get an easy tour of duty in Milwaukee.

River Two (Metaphorical Allegheny): The last breath of the wild-card “race” between Cincinnati and Washington can be extinguished here. On the other hand, as mentioned in no. 10 above, a sweep by Pittsburgh could make things really, really exciting. And in that case, Cincinnati would join its AL counterparts in being quite happy with a wild-card berth.

River Three (Metaphorical Monongahela): We have three solid pitching matchups, any of which could be a preview of the wild-card game. The Latos-Liriano gem goes down tonight, Homer Bailey and A.J. Burnett square off Saturday, and Bronson Arroyo closes it out Sunday against Jeff Locke. The highest ERA among the bunch is Arroyo’s 3.57. Which leads to an interesting point about both teams: The starting pitching is workmanlike, if not mind-blowing, and it remains to be seen how that will play in the postseason against teams like the Dodgers and Cardinals, who have a bona fide ace. Time will tell.

Until that time comes, gird your loins for the penultimate weekend of regular-season action, in which the gladiators of the diamond have EVERYTHING to play for.