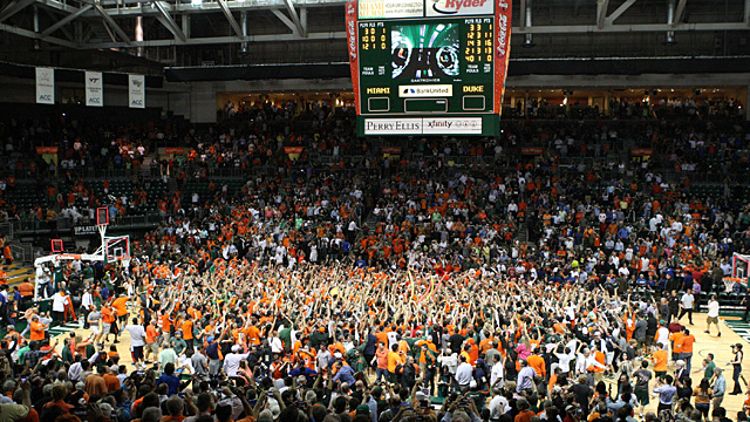 On Christmas Day, the Miami Hurricanes basketball team found themselves in Honolulu, leading Indiana State, 47-40, with 2:25 left in the third-place game of something called the Diamond Head Classic. A day earlier, they’d lost to Arizona by 19 points in the semifinals, and it was hard to blame either the Canes or Sycamores for the ugly game that followed. It was a consolation, for god’s sake, and they were making them play on the holiday. Miami’s loss to Arizona was just their second of the season, but the first — a 63-51 embarrassment at the hands of Florida Gulf Coast — had taken the shine off a team some people had expected to contend for an ACC title. They followed that snafu by coasting through December, even picking up a home win over Michigan State to restore some luster, but now the doubts had returned. And the whole situation was about to get worse; Indiana State found one last spark — annoying, in a way — and rallied from a seven-point deficit to tie the game in regulation. That was it for Miami. They lost by two in overtime, adding a Hawaiian chapter to an ignominious start. The Hurricanes and coach Jim Larranaga were flying back to the mainland as yet another ACC punchline.

And the question we have to ask, here on January 24, is this: How did they go from there to here? How, in less than a month, did the disgraced Hurricanes manage to roll up a 5-0 ACC record and establish a two-game lead that makes them presumptive favorites for the regular season title? How did they wrap both hands around the soft neck of the conference, and how did they squeeze like giddy lunatics?

More to the point, how the hell did they just humiliate the no. 1 team in the nation, handing Duke its worst loss since the 1990 national championship game?

Here are a few theories, starting with the elements Miami can’t control:

1. The ACC Is Either a Joke or a Nightmare. A Jokemare, Perhaps.

It’s by far the worst of the major conferences, and the top halves of the Mountain West and Atlantic-10 also put it to shame. The Atlantic coast landscape is strewn with the rotting corpses of once-great teams, and there’s no sign that anyone’s coming to clean things up before March. UNC is on a down year, struggling for respectability with a roster full of inconsistent freshmen and disappointing veterans. NC State, whose fan base came in with high hopes, has proved to be a team with superlative offensive talent that would rather sulk than play defense, and is destined to break hearts by doing things like giving up 51 points in a half to Wake Forest. Florida State lost its offense from a season ago, Virginia plays the most boring style of basketball in the country and seems to win or lose based on random luck, and the fringe teams who showed early promise — Georgia Tech, Maryland, Virginia Tech — have all but broken apart at the seams. Which brings us to Duke.

Duke came into Miami as a no. 1 seed the same way Gerald Ford came into the oval office in August 1974 as a U.S. President. Gerry was there by default after Nixon got caught snooping on the DNC at the Watergate, and the injury to the party after that little scandal made it all but impossible for him to actually win an election in 1976. The great strength the GOP had shown in the ’72 election no longer applied to Ford. And Duke? Duke found itself at the top polls by default after Louisville and Indiana lost the week before, but an injury to Ryan Kelly on Jan. 8 had severely weakened the team and made it all but impossible for them to play at an elite level worthy of the ranking. The great strength the Blue Devils had shown in early-season wins over Minnesota and Louisville and Ohio State no longer applied to the team that faced Miami.

So Duke was a no. 1 team, sure, but they were paper champs. They won’t see that ranking again this year, but if they get Ryan Kelly back at some point in the not-too-distant future, maybe they can recover the form that made them an elite team in December. If you believe Duke, though, they have no idea when or if he’s coming back, or what he’ll look like when he does. Which leaves Coach K with a team whose scoring power has been diminished and whose best player, Seth Curry, sometimes doesn’t even practice with the team because of his own injury. And the last time Kelly got hurt, a loss to a certain Patriot League school wasn’t far behind …

3. Miami May Be Very Good

It’s true that 5-0 in the ACC might not mean much, and even a win over no. 1 Duke might not mean as much as you’d expect, but the Hurricanes have become an excellent defensive team (12th in the country in efficiency, per KenPom) with an abundance of seniors and a lightning-quick point guard in Shane Larkin, whose legs move so fast at full speed that I swear the footage is sped up, like those old clips of Babe Ruth on the basepaths. If there was a star last night, it was Larkin, whose 18 points, 10 rebounds, and 5 assists gave Miami the engine it needed to overrun the visitors. Or maybe the star was Durand Scott, the senior guard who scored 25 points on 9-14 shooting and helped expose Duke’s weak perimeter defense. Or maybe it was Kenny Kadji, the 6-foot-11 senior who became the latest big man to outplay Mason Plumlee, scoring 22 points on an absurdly efficient 9-11 from the floor. Or maybe it was Trey McKinney Jones, whose defense held Seth Curry to an 0-10 night and the fifth scoreless game of his career. Or maybe it was …

You get the point. The real star of the game was Miami as a unit, the group of players who shot the lights out, totally befuddled Duke’s guards on defense, and turned in what has to be considered the year’s most dominant ACC performance. The Canes’ weaknesses, which include hitting the offensive glass and making free throws, are becoming less and less important as the team gels. If there’s doubt associated with the team, it’s not that they don’t have the talent to hold the two-game lead and win the conference, but whether they can avoid the letdowns and bad losses that have become their trademark.

Two last thoughts on the game …

This makes the third straight year that the middle Plumlee child got off to a hot start, raised everyone’s hopes, and then plummeted in conference play. After being out-dueled by Clemson’s Devin Booker and NC State’s Richard Howell and Miami’s Kadji, the file on his POTY hopes has been sealed shut. The stats never quite tell the whole story with Plumlee, but even those have become more pedestrian in the ACC. The points have gone from the 20s to the teens — and worse — and while the rebounds have remained more or less constant, the so-called free-throw improvement has regressed to 46.4 percent in conference play (13-28), and his impact on the game has been in free-fall mode. And I’ll also say this — Duke fans get on me for repeatedly knocking Plumlee’s instincts and lack of grace/court sense/fluidity/etc., since these qualities are observed and can’t be measured, but it’s truly remarkable to me that, in a long career of playing basketball, he’s only learned 1-2 post moves and still seems to be completely at sea when he gets the ball in the post. Seriously, watch him next game. If he doesn’t catch the first post pass, spin into the center of the lane, and launch into a hook shot that sometimes turns into a mid-air pass, I’ll have my editors buy you a beer.

2. A Complete List of Rules About When It’s Appropriate for a Fan Base to Charge the Court

Requirement no. 2: THERE IS NO REQUIREMENT NO. 2. STOP BEING A FASCIST COURT-CHARGING POLICE TRIBUNAL, AMERICAN INTERNET PEOPLE. THESE ARE COLLEGE KIDS, AND THEY WANT TO HAVE FUN. THEY CAN CHARGE ANY GODDAMN TIME THEY PLEASE AS LONG AS REQUIREMENT NO. 1 IS MET. THEY DO NOT HAVE TO ANSWER TO YOUR TWITTER ACCOUNT. FURTHERMORE, IF THEY CHOOSE TO CHARGE, I PROMISE THAT IT WILL NOT AFFECT YOUR LIFE BEYOND THE OBVIOUS DISPLEASURE YOU FEEL WHEN YOU WITNESS OTHER HUMAN BEINGS EXPERIENCING JOY. SO STOP. STOP. STOP. STOP. LEAVE THEM ALONE, YOU OLD CURMUDGEONLY MEDDLERS. LEAVE. THE. KIDS. ALONE.

Thank you for listening.

The Designated Player: The Extraordinary Journey of Machael David