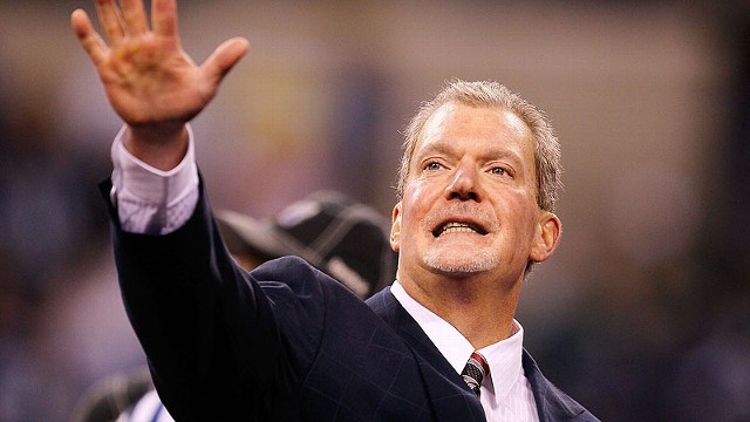 Irsay — florid, mad-eyed Twitter usage notwithstanding — must see two things happening here. One: Leading one of the youngest rosters in the league, he’s got 22-year-old Andrew Luck under center, purportedly one of the most NFL-ready QB prospects in a decade. Two: Other than the exciting little scamps running around in Indy this year, they’ve got three aging but still productive veterans: defensive ends Dwight Freeney (32) and Robert Mathis (31), and recently re-upped wideout Reggie Wayne (33) — not to mention 39-year-old placekicker Adam Vinatieri. So maybe training camp’s going a little better than expected and maybe Irsay senses a weak AFC South, what with a Mario Williams–less Texans, a Jake Locker–praying Titans, and a MoJo-missing Jags rounding out the division. So who are the Colts targeting? The attractive chip in Trade Candy Land right now is the aforementioned Maurice Jones-Drew, but Jacksonville would never deal in their division. And it’s Indy’s defense that needs to improve, particularly at cornerback. How about this? A second-round pick and athletic young tight end Dwayne Allen — a spare part now that the Luck–Coby Fleener Stanford combo has been reunited in the pros — for the soon-to-be-expensive Ravens CB Lardarius Webb, who does things like this on a regular basis. If Irsay can bolster his secondary, he may yet justify all that meteorological bluster.

Ryan Tannehill: not a guy you pay money to see

According to Armando Salguero of the Miami Herald, the Miami Dolphins have seen “no appreciable surge” in ticket sales since announcing on Monday that first-round draft pick and cheese-faced happy boy Ryan Tannehill will be the team’s starting QB. Salguero notes that Fins fans have endured 16 mostly terrible quarterbacks since Dan Marino departed to the Big Isotoner in the Sky (read: CBS studios), so the collective hesitation about a thrower who many felt the team reached for at no. 8 in this year’s draft is hardly surprising. But thus far, on Hard Knocks and in the preseason, Tannehill’s looked capable and occasionally frisky at QB. Bonus: He’s got a big smile, a cheery presence, and seems to have that “It’s cool, guys, I know I’m a rook” thing going during the light hazing this season. He’s also got the tools — if not the weapons — to succeed. (Please, no Lauren Tannehill jokes.)

Christian Ponder must lead with his skull

Vikings offensive coordinator Bill Musgrave is a respected NFL mind who has surely been kept abreast of the league’s ever-troubling history of head injuries. But first downs, it would be seem, are more important. Just ask Minnesota quarterback Christian Ponder, who put cranium on the line last week when he scrambled and lunged his body, headfirst, toward the first-down marker at the 4-yard line.

“People are tweeting at me, ‘Like, dude, slide feet first. What are you doing?'” Ponder said. “But it’s a planned deal.”

Planned deal. Planned concussion. Planned death. Dave Campbell of the Associated Press points out that Musgrave watched former teammate John Elway secure Super Bowls with that kind of head trauma-tempting strategy. Dear Bill Musgrave: That was 15 years ago! You know what else was a good idea 15 years ago? Tamagotchis! That’s no reason to keep one tethered to your key chain. Let Christian Ponder be great, but also, let him stay alive.