The Grass Isn’t Always Greener: The USMNT and the Problem With Away Stadiums 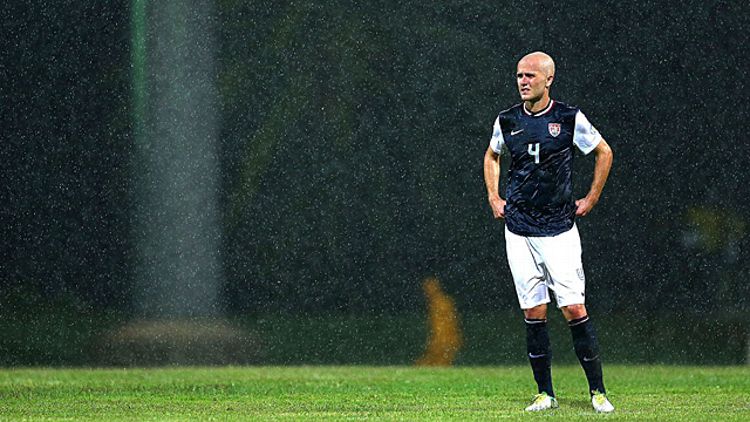 When the United States men’s national team plays home World Cup qualifying matches in stadiums around America, they pass the ball around pristine surfaces that have only ever been trodden by soccer cleats. When the squad travels abroad, however, they frequently find themselves dealing with less-than-ideal conditions. Jamaica’s Independence Park boasts long grass in some spots, and barely any cover on other patches. Costa Rica’s Estadio Ricardo Saprissa features an ancient synthetic surface that’s closer to concrete than the field turf common in new stadiums. Antigua and Barbuda’s Sir Vivian Richards Stadium is a cricket oval, complete with a worn-down patch in the middle where the wickets are placed.

Playing abroad in CONCACAF, a region in which supporters hurl a constant barrage of insults and worse, is difficult enough without trying to pass on fields that barely pass FIFA muster. But as the Americans improve — becoming definitively more skilled than their smaller regional opponents — they can expect to continue seeing poor conditions. It’s one of the best ways to slow down a superior squad, and the U.S. has struggled when facing these adverse conditions.

In three away matches during the semifinal round of World Cup qualification, the Americans (FIFA rank no. 27) went 1-1-1, losing to Jamaica (no. 50), tying Guatemala (no. 76), and barely beating A&B (no. 121). While the USMNT connected at least 79 percent of their passes in each match, the percentage was at least four percentage points lower than in the corresponding home fixture. Furthermore, they struggled to complete passes in the final third, losing some of the precision required to break down a packed-in opponent.

Part of the trouble was the size of the fields, which were on the smaller end of what FIFA allows for international matches. (There’s a long message-board thread about the width of the Sir Vivian Richards field here that has far more information than you’ll ever need.) The math for underdog home teams is simple: The same number of bodies in a smaller space means less room to maneuver, which makes the game harder for the superior squad. A narrow field eliminates the ability to send in crosses from the wings, a staple of the American attack.

“It is tough, to be honest. You never want to make excuses for the way you play, but you can’t ignore the condition that you get in some of those areas,” Graham Zusi says of the match against Antigua and Barbuda, his first road start in World Cup qualification. (A torrential downpour in the middle of the match also caused issues.)

Television commentator Phil Schoen alluded to as much during the broadcast on beIN Sport, saying “There, the bumpy pitch saves Antigua,” after Eddie Johnson flubbed a wonderful scoring chance when the ball inexplicably bounced up as he was about to shoot.

The scene repeated itself across soccer fields in Central America and the Caribbean, and it will continue to do so throughout the rest of World Cup qualification, but there is a limit on how much a coaching staff can do to ready its players. The changes are tactical in nature — play more directly, go “Route One” — and less about practicing on a similarly bad surface prior to the games.

“We mention it to the team, but it’s not like you can prepare for that. The game plan is the most important thing, and then we adjust,” Martin Vasquez, an assistant coach under Jurgen Klinsmann, says. “We want to have good preparation, and for that you need a good field. Before going to Jamaica, we tried to simulate the field by asking the grounds crew to let the grass grow a little bit longer. But you need more time to adjust to a bumpy field, and I don’t know if you can. Also, you don’t want to train on a bumpy or wet surface because there are injuries. You have to take that into consideration.”

Zusi agrees. There’s only so much a player can do physically to get ready for a game that he knows will be played on a bad surface.

“I think the only way you can prepare for those kinds of games is your mental preparation, to know that it’s not going to bounce the way you want it to all the time,” the Sporting Kansas City winger says. “Just not getting frustrated with it. If you let it get to your mind, it can throw you a little bit. Going into the games knowing that it’s going to be a rough pitch and the bounces won’t go your way all the time, I think that’s half the battle.”

In the final round of CONCACAF World Cup qualification, the Americans will return to Jamaica and travel to Costa Rica and Panama. The playing surfaces will be poor. (Mexico and, likely, Honduras, will have fields that are similar to those in the U.S.) The USMNT will need to learn from their past mistakes: Don’t overpass. Use speed and strength instead of ball skills. Basically, take the lessons learned in Antigua and apply them again, but sooner.

“We went into that game with the intention of playing our style and trying to impose that game on them. Obviously, that wasn’t the case. I don’t think we played particularly well that game. Whether it was the pitch’s fault or ours is hard to know,” Zusi says. “Eventually, what we realized was that we needed to put the ball in the box when we could and let the target forwards get the job done.”

They did, as Eddie Johnson found the back of the net in the 90th minute and the United States escaped with a 2-1 victory that was both deserved, because of the dominant possession, and lucky, because of the poor finishing and the chances conceded. It was enough, but just barely.

While on the road in CONCACAF World Cup qualifying, the ball doesn’t bounce your way. It doesn’t bounce the opponent’s way, either. It bounces randomly. How the Americans deal with that unpredictability could be the difference between a trip to Brazil and some really long flights home from tiny countries with inferior, but successful, soccer teams.