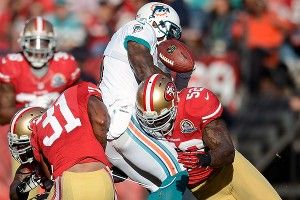 It’s good to check in with the league’s most relevant team statistics about once every four weeks. Four weeks isn’t enough to dramatically shift things, but it’s enough to see some change from (season) quarter to quarter and actually get a macro-level view into how teams and players are performing and changing. Of course, I haven’t gone back and done this since Week 8, so today’s look at the numbers is actually going to be with six weeks of gametime in the books. Are the Broncos still treating loose footballs like they’re banana peels in Mario Kart? And have the Dolphins continued to press opposing field goal kickers into missed opportunities? Let’s see what the numbers say. (Much of the data in this piece comes courtesy of ESPN Stats and Information.)

I usually feel justified in pointing out that a team’s fumble-recovery rate can have an enormous impact on their season. It’s a theory that doesn’t take a math degree to understand: Recover more fumbles, win more games.

That’s why it’s so puzzling that the Broncos have been so good and yet continue to have such a putrid fumble-recovery rate. At the halfway point of the season, they had recovered just five of the 22 fumbles that hit the ground in their games; they’ve done slightly better since, grabbing six of the 15 new fumbles in their contests, but they’re still just 11-for-37 on the year, producing a 29.7 percent rate that remains last in the league. It makes you wonder just how good the 10-3 Broncos would be if they were recovering just half of their fumbles. They recovered just two of the nine fumbles in their three losses (losses, by the way, that came against teams who are a combined 32-7 this season). If they recover five or six of those nine, would we be looking at an 11-2 team? A 13-0 team?

Trailing the Broncos is a litany of disappointing teams. It starts with the Chiefs and continues through the Dolphins, Eagles, Bills, Titans, and Lions. Each of those teams is recovering 41.2 percent or lower of their fumbles.

On the flip side are our friends in Washington. The Redskins don’t turn all of their fumbles into touchdowns, but it certainly seems like it at times. Like the Broncos’, Washington’s recovery rate has regressed toward the mean: after a 16-for-22 (72.7 percent) start to the year, the Redskins have picked up nine of the subsequent 15 fumbles, dropping them to 67.6 percent on the year. They remain in first place, and their success on those fumbles through the first 14 weeks might end up propelling them into the playoffs. Behind them are the Browns, Panthers, Texans, Ravens, and Falcons. They’re each hovering between 59.1 percent and 65.8 percent.

One of my favorite ways to look at how an offense is performing is to see what it does with the average first-and-10 play in situations where the two teams are within 14 points of each other. It’s a good shorthand to figure out how effective a team’s offense is in its most basic, context-independent set, with the point caveat in place to try to avoid situations where teams are in garbage time. Sorry, Dwayne Bowe. You can be a good offense and struggle on first down if you’re fantastic on third down, but if you’re really that great on third down, chances are that you’re pretty good on the opening play of the series, too. (All stats below reference this specific split unless mentioned otherwise.)

While Carolina had a dominating first-down offense earlier in the year, they’ve begun to sputter toward the mean and have dropped to fifth in yards per play (6.3) and sixth in new first downs created (23.5 percent) in this split. (Observant readers will probably be able to infer that that “new first downs” is a different way of saying “plays that gained 10 or more yards.”) The league leader in yards per first-down-play now? It probably comes as no surprise that it’s the New England Patriots. Tom Brady’s offense is averaging 6.7 yards every time they face a meaningful first-and-10. They’re third in first downs created on first down. The team that’s most likely to pick up 10 or more yards and move the chains without hitting second down is the San Francisco 49ers, who do that 29.0 percent of the time.

Stevan Ridley and the Patriots’ newfound running game might have garnered some attention this year, but New England isn’t running the ball very much on first-and-10. The Patriots run the ball on just 46.4 percent of their first-down plays, the fourth-lowest rate in the league. The league’s most pass-happy team on first down is the Oakland Raiders, who throw the ball 60.6 percent of the time on first down, even before they’re down 21 points and have to throw to catch up. It probably doesn’t surprise you that the Chiefs (31.0 percent) and Jets (32.6 percent) are the franchises most loath to put the ball in their respective quarterbacks’ slippery, turnover-riddled hands. Right after them, though, are the Seahawks (36.9 percent).

The worst first-down offense in the league is also probably the worst second- and third-down offense in the league: The Arizona Cardinals average just 4.5 yards per play on first down and produce a turnover once every 34 plays. They’ve actually been the ninth-most likely team to throw the ball on first down, which is stunning, considering the play of their quarterbacks these past couple of months. A surprising team that’s been terrible on first down, though, are the 31st-ranked Dallas Cowboys. Their yardage is virtually identical to the Cardinals’ rate, and they pick up first downs just 14.0 percent of the time without having to hit a second down along the way.

As with the offensive side of the ball, it’s a consistently great defense that ranks atop the first-and-10 leaderboard: The San Francisco 49ers allow the opposition just 4.4 yards per play on first down, with those offenses gaining 10 or more yards just 17.3 percent of the time. Both numbers rate out as the league’e best. Barely trailing them in each category are the Broncos, who rank second in yards allowed per play and in percentage of first downs allowed.

Surprise defenses making their way up the charts? I’ve got two. The San Diego defense hasn’t received much attention this year, but they only allow 4.7 yards per play on first down, which is the third-best rate in the league. They’re fifth in first downs allowed. The Browns flip those rankings, as they’re fifth in yards per play and third in first-down percentage allowed.

The most porous first-down defense in the league won’t be breaking news, but the depths that they’ve plumbed is truly remarkable. The New Orleans Saints are allowing opposing offenses to average 7.2 yards per play on first down, and a full 27.7 percent of those plays are picking up new first downs in their own right. In both cases, that’s the worst rate in football, but that doesn’t tell the whole story. The average league defense allows 5.5 yards per play in that situation. New Orleans is two-hundredths of a yard away from being three full standard deviations above the mean, which qualifies it as an all-time dismal defense. If that doesn’t mean anything to you, consider that the 31st-ranked Buccaneers — who are averaging 6.3 yards per first-down play — are closer to league average than they are to the team one spot below them. That’s how dreadful the Saints are.

Let’s talk about the Patriots some more. The New England offense isn’t just fantastic on first down; it’s fantastic in the red zone, too. The Patriots score an average of 5.5 points every time they make it inside the opposition’s 20-yard line, which is the highest average in the league. Behind them are the Saints (5.4) and Buccaneers (5.4). The Buccaneers are an interesting case: They actually lead the league in percentage of red-zone drives that end in a touchdown, but if I ask you to recall one red-zone possession from the Bucs this year, it’s undoubtedly going to be the one where Vincent Jackson was tackled from behind by Malcolm Jenkins at the 1-yard line and the Buccaneers failed to score from first-and-goal at the 1. Houston and Atlanta close out the top five on offense.

The bottom five contain the usual suspects. No, not Fenster or McManus, but teams who could certainly hope to give the keys to their red-zone offense to somebody else. Seriously, stop right now and try to guess who the league’s five worst red-zone offenses are. Have them in your head? OK, it’s the Chiefs (3.7 points per red-zone possession), Cardinals, Rams, Browns, and Jets (4.3 points per possession). Are those the five teams you thought of? Well, you probably figured that the Michael Vick goal-line turnover factory in Philadelphia was up there, and you weren’t far off, since they’re currently sixth.

In a sea of bad news for the Cardinals, I’m pleased to note that there’s some ray of hope for Arizona fans: Their defense is still very stout against its own goal line. The Cardinals have allowed an average of just 4.0 yards per play on their opposition’s red-zone trips, the best-such rate in the league. Only two other teams have allowed scores in the red zone less frequently: one is the Bears, and the other is …

The Cleveland Browns? Absolutely! The Browns have allowed teams to take 39 trips into their red zone and allowed just 29 scores, the best rate in football. Unfortunately for the Browns, when the opposition does score, it’s usually a touchdown. The lowest rate of touchdowns allowed on red-zone possessions in the league belongs to the Baltimore Ravens, who have only allowed touchdowns on 40 percent of the opposition’s trips inside the Baltimore 20.

It would be even better for the Ravens if they could induce some missed field goals from opposing kickers with all the three-point attempts they force, but kickers have been very steady against Baltimore this year, as the opposition is 32-for-33 (97.0 percent) on their field goal attempts. That’s a statistic that’s totally random and subject to chance, but it’s meaningful, since a missed field goal here or there can be the one you need to propel you into the playoffs. The only other team in the league to have a worse rate for field goals allowed is the Seattle Seahawks, who have seen 18 kicks go up against them and muttered something under their breath as each of the 18 sailed through the uprights.

Finally, if you’re looking for a lucky team on field goal attempts, take the Tampa Bay Buccaneers. The Bucs’ opposition has only managed to convert 15 of their 26 field goal attempts this year, a 64.0 percent performance that thrills the thousands of people in attendance at Tampa’s stadium. The Lions, Bills, Rams, and Cardinals (76.3 percent) round out the bottom five there.

The Grass Isn't Always Greener: The USMNT and the Problem With Away Stadiums