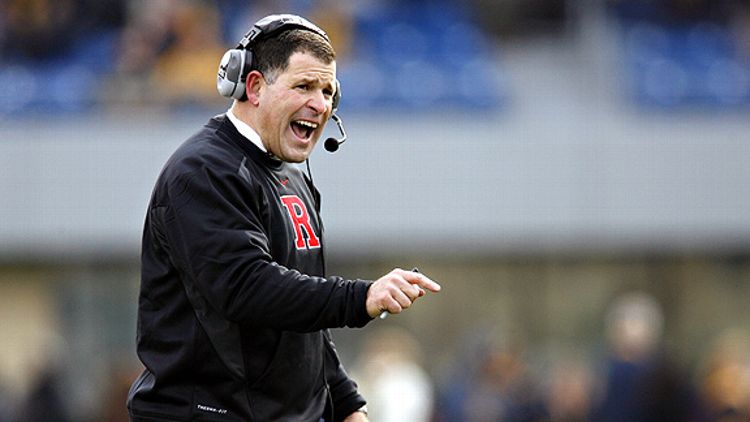 College football is the most compelling sport in America, yet nothing is more torturous than listening to college football coaches speak publicly about their teams. I know this because I spent Tuesday morning standing in a hotel ballroom in Newport, R.I., while eight Big East coaches filibustered for a solid hour. I heard them reminisce about games played in 1991, speak about punters with irrational brightness, thank people who I’m not sure actually exist, and trumpet the competitive supremacy of a conference that has a direct tie-in with the Beef ‘O’ Brady’s Bowl. I heard one coach chastise a player for going to class too much, which was either the closest thing to joke anyone made or the closest thing to the truth anyone spoke. “That was the most boring hour of my life,” one player said, as he headed toward a battery of television interviews. “My god.”

Greg Schiano looks and acts like a college football coach. He has a massive jaw and an Eric Taylor scowl. He spent time at Penn State and coached at Miami. He is in his 11th season at Rutgers, in a job that has gone from hopeless to promising and back to the verge of hopeless again. In a poll that tends to be the only news to emerge from media days like these, Schiano’s team was picked to finish last in the conference this year. He has also never been much of an advocate for national issues, so he might not seem like the most likely person to propose radical change in a sport that doesn’t take kindly to probing questions. But it’s amazing what a brush with mortality can do to a coach.

Last year, one of Schiano’s players, Eric LeGrand, suffered a serious spinal cord injury on a kickoff. And so a few months back, Schiano began floating an idea. He proposed the abolition of both kickoffs altogether (they’re generally considered some of the most dangerous plays in the game — the NFL moved the spot of the kick to the 35-yard line this season to encourage more touchbacks). Schiano’s suggestion: Replace them with the option to either punt or face a fourth-and-15 situation from the kicking team’s own 30-yard line.

I know what you’re thinking, because the first time I heard it I thought it, too: This could not work. This could never work. It would usurp tradition, and it would soften the game’s edge. We need kickoffs because we’ve always had kickoffs. But what is more inherently exciting, a 68-yard punt return that traverses all sorts of curious angles or a 101-yard kickoff return in which a defender never comes within five yards of the ball? And does it make more sense to place a comeback on the foot of a kicker bouncing a ball off a patch of field turf, or in the hands of a quarterback?

Of course, that is what college football does best — it shrouds itself in tradition to dispel progress. So I don’t know if Schiano’s plan will ever take. Perhaps it needs adjustments, and perhaps it has holes, but the one thing you could not say about it is that it would be boring. Which is more than I can say for Paul Pasqualoni.

On September 13, 1997, I watched Marshall beat Kent State, 42-17. Marshall had just joined the Mid-American Conference after making the leap from Division I-AA — this was the greatest MAC offense that ever existed. Against Kent, Moss had eight catches for 216 yards and three touchdowns, though he easily could have had six by running straight downfield and raising an arm. Two weeks later, against Ball State, he had 205 yards and five touchdowns. In those two games, Pennington threw for 737 yards and 11 TDs.

A few years later, the rumor around Northeast Ohio was that LeBron James would commit to the University of Akron, play for one year, put up Oscar Robertson numbers, single-handedly lead the Zips to the Elite Eight, then jump to the NBA. This would have been great but, in a way, it had already happened. As prolific, controversial, and downright weird as Moss’ NFL career was, the fact that he and Pennington both found themselves at Marshall at the same time (due to very different circumstances) is one of the great peculiarities in college football history.

Because his band made the reputation of the flying lizard and the inconspicuous equine, and because every so often I start to think that Freedom Rock was something I concocted in my head during a mushroom trip in 1993.

Here is the unvarnished truth: I would almost — almost — rather have a canceled season and five weeks of Hard Knocks at Jets training camp than a full season and no Hard Knocks at all. It really was the best thing to happen to the NFL since the NFL.

And now, to drown my sorrows, I’m going to help myself to a goddamn snack.