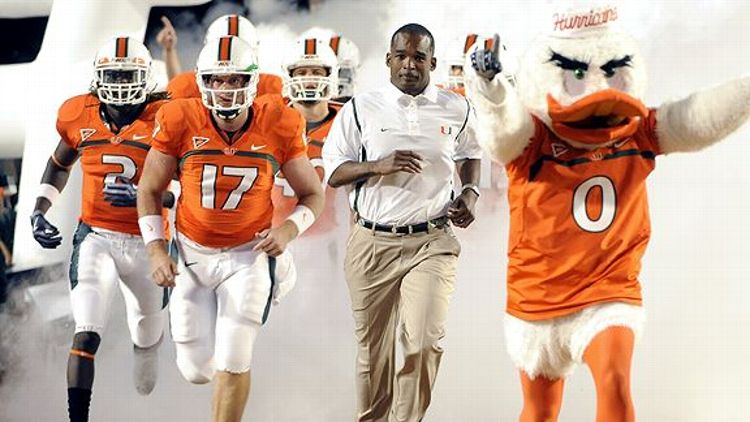 The story that got me was the one about Nevin Shapiro attempting to throttle a school compliance director in the press box. I mean, we can theorize ourselves into knots at this point about the ramifications of Yahoo! Sports’ phenomenal investigative work on Shapiro. We can say this happened because amateurism is an unsustainable ideal and we can blame the NCAA for policing an antiquated system in the way Paul Blart patrols a Cinnabon stand. We can disparage Miami president Donna Shalala for her (apparent) ignorance, and we can cite the farcical hypocrisy of former Hurricanes athletic director Paul Dee. We can call for the napalming of college football as we know it. At this point, nothing seems out of the question.

But what’s been lost in all this outrage is that Miami had made progress on number of fronts, and all these things with Shapiro allegedly happened anyway. And what’s disturbing to consider is that maybe Nevin Shapiro happened because of Miami’s attempts to play by the rules. In 2010, Miami coach Randy Shannon had the third-highest Academic Progress Rate of active Division I coaches. Only one Miami player had been arrested in four years; in a single fraternity house at my alma mater, we exceeded that number by at least a multiple of five. This is an achievement at any major college football program. After doing it at Miami, Shannon got fired.

I know that administrators like Shalala face a unique pressure to satisfy several parties. I’m tempted to believe that they were more bumbling than calculating when it comes to Shapiro. But I’m sure there were others boosters who felt like Shapiro did, who thought Miami was getting soft during Shannon’s regime because of his attempts to comply with the rules — that somehow the losing directly correlated with compliance. For years, Miami made its reputation by winning big and behaving badly. The program was built on an outlaw image that has carried over for a generation. Without this, what is it? Is it a jump to think that much of their fan base — including Shapiro — gravitated toward Miami for this very reason?

That’s the challenge for those who remain at the school. They now have no choice but to recast a program that has defined itself as much by the eight-word cover of a magazine as it has by winning. Overcoming the death penalty might be easier than overcoming this.

You want to know what’s actually wrong with college football? It’s that a megaconglomerate apparel company feels the need to design uniforms that resemble Justice League characters, just because they can.

In 1967, Al Davis chose a defensive tackle named Richard Sligh in the 10th round of the NFL Draft. This was a notable pick largely because Sligh was 7 feet tall. He is still believed to be the tallest man ever to play in the NFL. His career lasted eight games.

I point this out for two reasons:

A.) Al Davis has been loco longer than you’ve been alive, and

B.) Choosing Terrelle Pryor would not rank among the top ten most insane decisions of Davis’ career. I don’t imagine Pryor will make it as a quarterback, but he’s also one of the best athletes I’ve ever seen play college football. There’s a place for him somewhere. At the very least, he will probably work out better than Sligh ever did.

5. Tuesday’s earthquake, various locations on the East Coast
Because the weirdest part is when you go back and analyze your thought processes during something like this. That’s when you realize that if an actual crisis had occurred, your frontal cortex would degenerate into a Jell-O mold. For a fleeting moment, as my entire four-story building swayed and rattled, I actually thought that zombies were ascending toward my door.