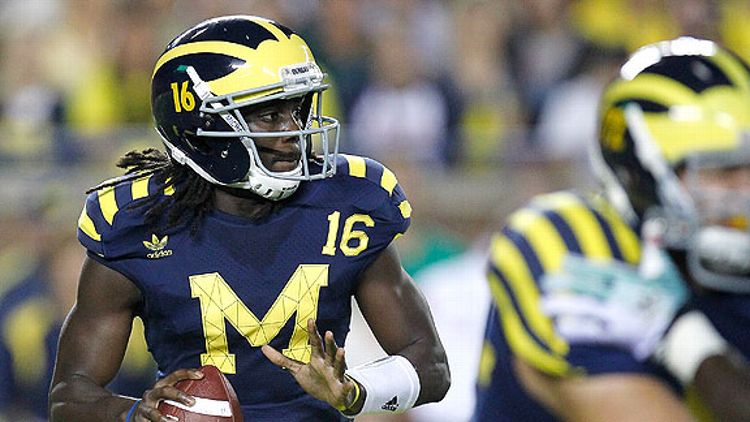 1. DENARD
There’s a reason He is here, and that’s because He is an extraterrestrial being sent down to usher us into the future. I mean, His middle initial is X! Is that not enough proof for you? Remember that Twilight Zone episode when the kindly old traveling salesman comes upon a washed-up baseball player in a tavern that suspiciously resembles every tavern in every Twilight Zone episode ever, and the salesman offers him a bus ticket to Scranton, Pa., and then moments later, a phone rings and the baseball player has a job offer in Scranton? That’s Denard. He’s carrying our bus ticket to Scranton. He’s the harbinger of where football is headed, even if we don’t yet realize it, even if He may not be there to lead us.

Everything about Him defies human logic. Little man refuses to knot his sneakers. He underthrows everyone on every play. He does not fit the system. Michigan’s coaching staff keeps trying to repress Him, and it’s not working, because what Denard requires — what we all require, in this overly repressive world — is freedom. Denard just wants to be free! And so when we came right down to it, there He was in his Monty Burns regalia, 23 seconds left, darting into traffic, heaving yet another pass into the Ann Arbor night. People want to chalk it up to luck or the fact that Notre Dame hasn’t played defense since Rudy Ruettiger blitzed off the left side, but maybe Denard is some kind of prophet, sent here to squire us into a new reality where quarterbacks who can’t really throw the ball pass for 338 yards and defense is no longer a relevant concept. Where football is as free as the wind.

Really, would that be such a terrible fate?

So what if his university sounds like the LLC registration for a company that specializes in life-insurance scams, and who cares if he chose this program over West Virginia on the whim of an infant? For a moment during FIU’s 24-17 win over Louisville, when T.Y. Hilton caught the ball on a crossing pattern and split defenders for a touchdown, he was the baddest receiver in the land. Of course, this was on a Friday night, which means the Florida International-Louisville game was competing against a Donny Deutsch re-run and a Criminal Minds marathon, but this is the beauty of college football being played nearly every night of the week: Give us enough T.Y. Hiltons to showcase, and soon there will be no point in ever leaving the house.

4. The Celebratory Hitch, as practiced by various NFL players

We know that men in tight pants have been prematurely celebrating touchdowns since Red Grange performed his now-legendary “Ice Totin’ Two-Step” against the Pottsville Maroons. But this is something of a developing trend: At least twice over the weekend (see Petersen, Patrick; Ginn, Ted), returners celebrated their triumph by ennobling their achievements about ten yards from paydirt with multiple defenders in pursuit. Then, suddenly, as if that video of Leon Lett they’d been shown in a mandatory Sidney Gottlieb seminar flashed into their frontal lobes, they starting booking it toward the goal line like T.Y. Hilton on a Friday night. Cue music, and scene.

Because I keep trying to imagine where Eric directed that plane to take him and the pregnant daughter of the woman he’d slept with in the previous episode, and I keep coming back to either a Club Med in Cancun or a cheap motel in Niagara Falls.