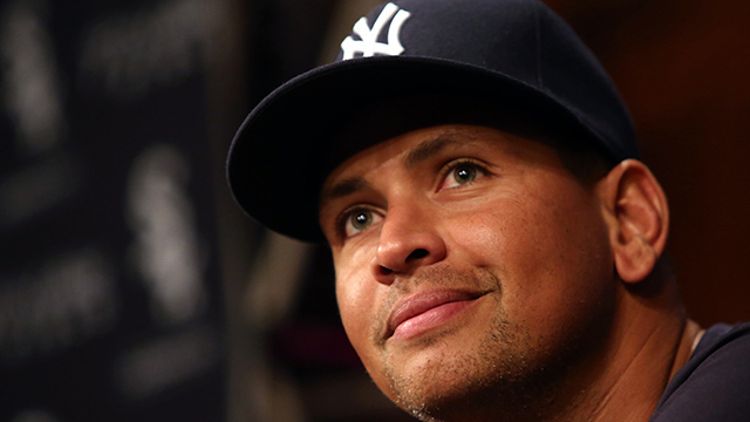 With a 211-game suspension looming, Alex Rodriguez returned to the Yankees lineup last night, going 1-for-4 in his first game of the 2013 season.

We know that A-Rod is a complex man, full of depth and shadow. But though we’ve studied him for years, have we truly captured his essence? Today, we honor the man with a photo essay celebrating his many faces; from the moment he entered the stadium to the end of his first at-bat.

A-Rod in cart, jacket and collared shirt, no tie.

For just a moment, he stares straight at the camera as the men drive him through the gray corridor and into the stadium. There is a knowing grin on his face. He has cheated. He is guilty. He might be a mafia don being led by police to his cell. But he has lived. Now the world of justice has brought him low, but he smiles because he has seen and done things we will never know. The men on the cart look away, faces neutral, avoiding our attention. Not so for A-Rod. He looks into our soul. Would you judge me, then? Would you, who have never known the craggy heights and the perilous fall, dare to judge me?

Relevant Yogi Berra Quote: “Always go to other people’s funerals, otherwise they won’t come to yours.”

A-Rod is transformed. Gone is the secret smile, protecting memories we cannot fathom. His face blossoms into a full, innocent grin. He is the child at a birthday party, and he sees that we are all here for him. He is pleased to be the center of attention. In his innocence, he forgets the circumstance. He forgets the disgrace. All that exists is the swell of gratitude. They are looking at me. I am the star. A world of punishment, of hatred, of boos, fades into silence. Simplicity reigns; we are all children, glowing with joy at the sight of our serene mothers, our stern fathers.

Relevant Yogi Berra Quote: “I think Little League is wonderful. It keeps the kids out of the house.”

We come into this world alone, and we die alone. If we are lucky, we experience moments of pure communion. At every other time, we walk alone.

Relevant Yogi Berra Quote: “If the world were perfect, it wouldn’t be.”

Their hands will meet for less than a second, but the human contact will suffuse A-Rod with a boundless joy. Whether it’s true or false, he will feel in that instant that the trials he endures are shared by a group of men who wish him well. That if he stumbles, those others will be there to lift him by the shoulders. This feeling, like the collision of palms, will endure for less than a second.

Relevant Yogi Berra Quote: “It was impossible to get a conversation going; everybody was talking too much.”

Relevant Yogi Berra Quote: “You can observe a lot just by watching.”

In the dugout, with The Captain.

Derek Jeter is blurry, eyes obscured by the brim of his cap. Reserved, mysterious. Content to let us project our feelings onto him. Needing nothing. We have never seen him clearly, and yet we love him. A-Rod looks to the side, seemingly in focus. He pushes his head forward, as though he wants to be seen; as though he needs something from us. Trying desperately to forge an image, insisting that we accept a specific version of himself. We have never seen him straight on, and yet we hate him. In the background, the word “Giants.” Yes. Here they are, the giants of our generation. The greater and the lesser, forever.

Relevant Yogi Berra Quote: “If you can’t imitate him, don’t copy him.”

A-ROD AS PRISONER OF HIS OWN MAKING

I look out at you, but you are a million miles away. I realize now the folly. I have tried so hard to reach you, and have only been erecting this prison. Every mistake, a new link in the chain. Now I am bound. A life sentence. You look in and see a curiosity. Here is this man’s criminal record. Here is why we’ve thrown away the key. Crime after crime, listed neatly. Maybe there is pain, you think. But you don’t really care. Just a cautionary tale. Don’t let the children look too long.

Relevant Yogi Berra Quote: “I knew I was going to take the wrong train, so I left early.”

At bat, summoning the ghosts.

In desperation, we resort to the supernatural. There is nothing on Earth to save us. We stare into the abyss, and it stares back. Can we harness the darkness, and make it a savior? The world turns, the universe laughs.

Relevant Yogi Berra Quote: “Why buy good luggage? You only use it when you travel.”

He grimaces at the strings, but knows he’ll dance anyway. He can never resist. We are the puppet masters, and he is at our command. DANCE, A-ROD! AMUSE US! FASTER! FASTER! STOP! THIS JESTER GROWS TIRESOME AND OLD! DISPOSE OF HIM FORTHWITH!

Relevant Yogi Berra Quote: “If the fans don’t want to come out to the ball park, you can’t stop them.”

A-ROD AS “THE SCREAM”

Awaiting the pitch, howling into the unknown.

Relevant Yogi Berra Quote: “He must have made that before he died.”

After the base hit.

Relevant Yogi Berra Quote: “The towels were so thick there I could hardly close my suitcase.”

Did that old guy notice? What’s his name again? You should know this, A-Rod! He’s been around for years. Clement, maybe? Barney? Some old guy name like that. Gus. Winston. Angus. Shit! Maybe ask him his name, show him you care. No, don’t attract attention. Then he’ll realize you had an orgasm on the field again. This is a time for silence. Learn from the past. Crap, he’s smiling at me. He knows. I have to ask him to keep this between us. Maybe threaten him, but subtly? Son of a bitch, what is this guy’s name?

WARNING: Tony Mitchell Will Dunk You Into a Coma