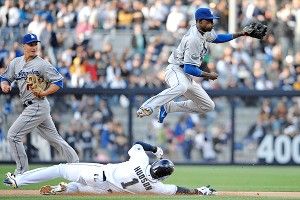 One of my favorite baseball players of the previous decade retired over the winter, and if you’re not the type of person who follows every lukewarm development of the hot stove league, there’s a very good chance that this news — which was casually announced by the player on a Colombian radio station — passed you by completely.

The now-former player in question is Orlando Cabrera, a once-respected, recently lambasted infielder with one of the strangest MLB career paths you’re likely to come across.

Cabrera peaked in 2003, playing for a team that no longer exists in a city that barely cared, became a Red Sox legend despite playing roughly as many games in Boston as Daniel Nava, and then spent the latter half of the decade gobbling up ground balls for a series of playoff teams, until failing to reach the promised land last fall for the first time since 2006.

Which isn’t to say he didn’t try. Before finishing up his final season wearing a Giants uniform, Cabrera played in Cleveland, where he was part of an Indians team that entered June 12 games over .500, much to the surprise of everyone except for this guy.

But not this guy, who, much like every other stat-focused baseball writer, found it truly hilarious that old-schoolers like the Twins’ broadcasting duo still believed in the concept of intangibles. Because why should a Hall of Fame pitcher know anything about what makes for a winning environment?

Do handshakes win baseball games? Of course not. Neither does being impatient at the plate. But Cabrera’s slap-happy ways did get him to pull off things like this. Something I, as an Orlando Cabrera believer, fully expected to happen even as I watched Justin Verlander plow through the Indians one after another in a bid for his second no-hitter of the season.

Which is precisely what’s so annoying about Aaron Gleeman’s aforementioned tweet. Dick Bremer and Bert Blyleven (and me, for that matter) enjoy believing that the players we love will continue to do the magical things we’ve witnessed them do. Was Orlando Cabrera the sole reason five different teams made the playoffs six times in seven years? Of course not. But why is it a problem to think that his aura had something to do with it? It’s far less ridiculous than equating that thought to a pinch hitter deserving a spot in Cooperstown.

For instance, by every statistical measure, Nomar Garciaparra was a better player than Orlando Cabrera. But for anyone who watched Nomar sulk his way through the month and a half he spent in Boston in 2004, there was a significant sea change in the way the Red Sox played when he was replaced by Cabrera, a pint-sized embodiment of energy in a uniform 10 sizes too big.

And Cabrera is the player who came to mind last year when I first saw the Dodgers’ Devaris “Dee” Gordon.

Like Cabrera, Gordon plays shortstop, but aside from a tendency to wear oversize clothing and swing at anything, their talents have little in common. But that’s where their shared exuberance for playing baseball comes in. Both do things on a field that make you smile, like in spring training when Gordon zapped from first to second without Kansas City’s Danny Duffy — a lefty! — even noticing.

Yet despite this excitement around Mr. Excitement, you don’t hear as much about Gordon as you do about other up-and-coming hitters. That’s because the guys frequently mentioned — your Bryce Harpers and your Mike Trouts — have the five tools that baseball scouts and writers demand in their prospects. At this point in his career, Gordon has just one tool. But that’s what makes him so appealing.

Take another look at Gordon for a second. He looks more like a bat boy more than he does a ballplayer, and if Wikipedia can be trusted, he’s (not surprisingly) the lightest player in MLB. And he’s a humble dude. We know this because he says so.

On the other hand, Bryce Harper gets credit for being outspoken and wanting to be a superstar, but who beyond the Beltway wants to root for a guy who knows how awesome he is? Harper was on the cover of Sports Illustrated at 16, used to wear WWE-inspired face paint, and famously roots for the Yankees, Lakers, Cowboys, and Duke.

Gordon’s the opposite. Like his father before him, he’s a slight man in a sport where size is king. And the stuff he’s good at, namely using his speed to swipe bases and distract pitchers, is what made dudes like Pierre and Podsednik World Series heroes despite irking every stat-head on the Internet.

For all we know, Gordon will develop the hitting and fielding skills to be better than those guys (and for anyone questioning his batting eye, this happened yesterday) but there’s a chance that 10 years from now, he’ll be a former World Series champ looking to leave Los Angeles, and some team will get killed by baseball writers for signing a fast guy who’s no longer fast.

But until then, we should enjoy Dee Gordon for what he is. A guy who may have gone 0-5 in Thursday’s 5-3 win over the Padres, but still created the highlight of the game. The play caused Vin Scully to chuckle and alert Dodgers fans to the talents of Mr. Excitement by matter-of-factly exclaiming: “He is really exciting!” He probably thinks Orlando Cabrera is a Hall of Famer.