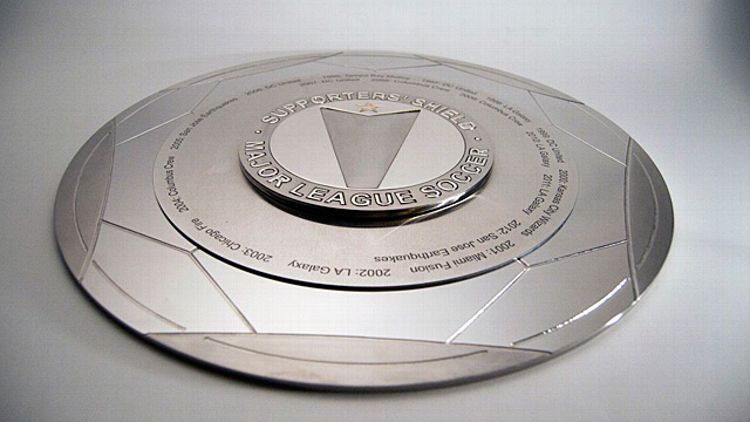 As I type this, a rather beautiful silver shield is winging its way from Real Salt Lake to Chivas USA, to the next group of MLS supporters who get to celebrate their part in creating it. The Supporters’ Shield is a trophy made by MLS fans to honor the team who tops the regular-season standings, is now in its second physical incarnation. A new fan-funded trophy has taken the place of the original — one that had filled up with more engraved history than its originators perhaps dared hope for.

The original trophy grew out of the legendary North American Soccer Listserv, which predated MLS, though not by much — the ’90s boom of the web running pretty much concurrent with the latest version of Division One soccer in North America. That paralleling with Internet history is a crucial characteristic of the social fabric of contemporary U.S. and Canadian soccer support — for better or worse it’s a digital league. The original Listserv featured many voices who would become key players in the first wave of organized MLS supporter culture, as well as figures like Phil Schoen, the current beIN TV announcer, who ended up being an inadvertent driver of what, for the time, was the ambitious form the first shield took.

Sam Pierron, who ended up leading the push for the initial trophy, and who wrote the history of the shield for the current incarnation, describes the NAS Listserv thus:

It’ll remain forever the best online forum of any sort I’ll ever be a part of, because U.S. soccer on the Internet at that time was more or less only early adopters — people who were really die-hard about soccer and/or who were highly educated people. Without sounding like a snob, it was fairly self-selecting as to people who were really clued in to what was going on — a huge percentage of the users at this time were in some ways connected with an educational institution. It was a really interesting group of people. Bob Ley from ESPN was on it. Phil was there before MLS was founded. He was involved as a broadcaster, but he was a fan — he was one of us. But this was the forum, this was the place to be — the central organizing space for … everybody.

In 1997, with MLS in its early days, Pierron was part of a conversation initiated by a Tampa Bay Mutiny supporter named Nick Lawrus, who proposed a Supporters’ Scudetto (after the Italian Serie A trophy) for the team with the best regular-season performance. Typical of many an Internet thread, the conversation fizzled out when a debate broke out over the name (Pierron: “He took his trophy home”), but the germ of the idea persisted.

In part this was because the Listserv represented the most natural demographic for the new league, but also, via the nature of both the Internet and that self-selecting constituency of fervent soccer fans, the most naturally critical constituency. As Schoen recalls, “I think in MLS, in the early days, there were a lot of fans who were almost a subculture — many of whom thought that they were being overlooked and ignored by Major League Soccer. Obviously MLS had been focusing in on MLS Cup for understandable reasons, but a lot of us traditional fans felt that the team that finished with the best record in the regular season should get something for that.”

It was a common theme of the NAS discussions at the time, though the award of MLS Cup to the postseason winners was only one of various supporter gripes in the early days, as the new league’s shootouts and countdown buzzer innovations came and went amid much grumbling. But Pierron, a fan of what was then the Kansas City Wizards (he also ran their website for a year, before the league centralized the teams’ web presences), had picked up the baton from Lawrus’s suggestion and began trying to raise funds for a trophy to be awarded by the fans.

Having cobbled together a couple of hundred dollars from donations, he met up with Schoen, who by now was working with ESPN, and was passing through Kansas City for a game. Schoen had already suggested he wanted to make a donation, but Pierron was surprised when he received a check for $500, which shifted the conversation from buying an off-the-shelf trophy to producing something custom-made.

Schoen says now of that donation, “I definitely wanted to do what my share was — what I felt I owed the game, I guess.”

For Pierron, “He (Schoen) did single-handedly change the scope of what we were trying to do. It was kind of a breakthrough moment in realizing that more was possible than we dared to dream.”

As Pierron acknowledges, a “supporters section” in those days was lucky if it numbered in the hundreds let alone thousands, but nonetheless, without precedent, and with efforts largely coordinated through the Listserv, the $2,200 raised was enough to get a trophy made.

There’s a rather nice account by Jeff Bradley in ESPN Magazine of a proud Pierron walking out to the center of the Rose Bowl and presenting the first Supporters’ Shield to the L.A. Galaxy early in 1999, to commemorate them for topping the standings in 1998. In its evocation of some of the early supporter groups rattling around giant stadiums, it’s a rather lovely snapshot of nascent supporter culture — though arguably the snapshot of Miami Fusion fans holding the Shield hostage to protest their team’s dissolution in 2001 was as telling an image of the early, precarious days of the league.

Since that moment, as all parties acknowledge, both supporter culture, and the league’s recognition of it, has transformed. The arrivals of Toronto and the Cascadia sides have been particularly eye-catching and a godsend to MLS marketing efforts, though in general, supporters groups around the league, and particularly those that interact with each other on a regular basis through such initiatives as the Independent Supporters Council, are careful to acknowledge and take pride in their collective history. So while there’s a little bristling among old-school supporters about any suggestion that supporter culture started with the advent of Toronto, Seattle, or Portland, the new generation of fans generally celebrates its part in a continuum, while the likes of Pierron, now somewhat removed from the fan adventures of their couch-surfing early 20s, ruefully acknowledge that, “In the words of Danny Glover, ‘I’m too old for this shit.’”

The new generation of fans no longer gathers around a single Listserv, though the subsequent balkanization of the message-board era has arguably come more full circle with the advent of Twitter. In another full circle moment, the president of the new Supporters’ Shield Foundation (elected by members of the ISC) is Sean Dane, the main hype-man for the Sporting Kansas City supporters’ section, The Cauldron. And in a nod to one of the dominant voices of a new generation of MLS soccer fans, his vice-president is Kevin Zelko, founder of Gorilla FC, one of the Seattle Sounders supporters groups. Both have been involved in the fund-raising for the new trophy, which has been financed from supporters group members around the league in a variety of ways, including the selling of commemorative scarves (Dane: “If you buy a scarf you’re buying a share in the trophy”). But as Dane emphasizes, partisanship aside, this has been a very broad collective effort:

“It’s been a beautiful thing in this process — we’ve got board members from Seattle, Kansas City; designs coming in for Portland for scarves; web work being done up in New England; promotional work being done by groups across the league — so beyond just the agreement to do this at all, the effort continues to be a united one from all the supporters groups.”

The original trophy was made by a student at the University of Kansas, whose work had been seen by then fellow student, Pierron, at an art fair. The silver gauge width was not really up to the job, but at least it was an original commission. The updated version was made by a metalsmith in Toronto and cost $16,000. Schoen calls it “an absolutely masterpiece.” Zelko calls it “beautiful,” but wryly notes, “It’s really heavy — I can just imagine a player lifting it up and beheading another.”

I ask Zelko if the prominent legal notices on the website are in any way a relic of the tussle between MLS and the founders of the Cascadia Cup, a subject he got to ask commissioner Don Garber about during a Google Hangout with fans and journalists from around the country. Zelko explains, “The Cascadia debacle has definitely created a little more awareness in terms of us minding our P’s and Q’s in terms of copyrighting and making a formal foundation … we have bylaws and all those things. It’s just about establishing that this is a Supporters Cup. Every team’s supporters sent money to pay for it.” As regards the Cascadia Cup, “It was nice that he [Garber] acknowledged that they’d made a mistake [in aggressively pursuing a copyright claim] to the larger MLS body. He made it sound like we were going to end this issue sooner than later, but we’re having to pay lawyers to continue until it’s wrapped up.”

Yet in a perverse way, the very fact that there’s a dispute over regional trophies like the Cascadia Cup, or that the foundation should feel the need to protect the Supporters’ Shield legally, shows that the MLS powers-that-be and the supporters are in agreement that these things have value. Schoen feels that in the Supporters’ Shield case in particular, “I wouldn’t be surprised if sometime in the not too distant future if MLS decides to — I won’t say “adopt” because of the whole problem with what’s been going on with the Cascadia Cup — but recognize the regular-season champion a bit more, even when they still have the MLS Cup champion.” He then makes his comment about that eight-month regular season being the common proving ground for the best teams around the world:

“I think the fans recognize that, I think they’ve made the league recognize that, and I think that the sport in the United States is better for what the fans’ effort has been. Fans are starting to realize it’s more than just paying for your ticket and sitting down and watching; there’s an active element to being a soccer fan and wearing your passion on your sleeve.”