The Designated Player: The Return of Thierry Henry's Inner Monologue 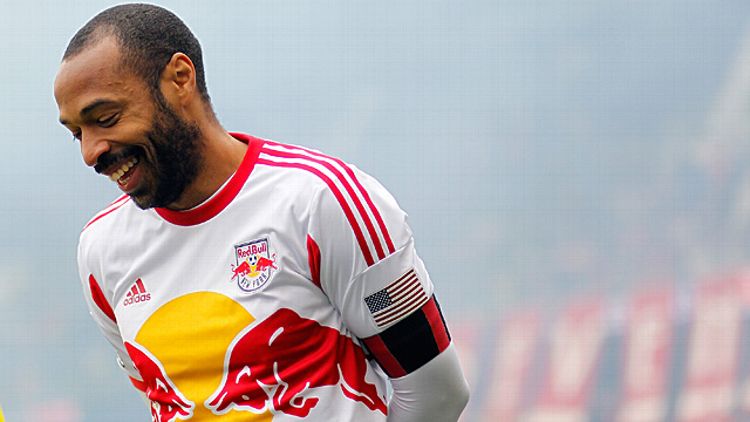 On Monday night, FIFA 14 dropped with a big party in New York, DJed by Swizz Beatz and featuring Drake playing Tim Cahill in a rap-soccer-thumb-dexterity mash-up. But at the end of the night, as the last reveler exited the building clutching their free game, the true technological exhibition was about to get under way, for a select few at least.

Keen-eyed observers at the FIFA event would have noted that as the New York Red Bulls squad posed giddily for photos with the victorious Cahill, one of their number was noticeably absent. As Grantland edged toward a door at the back of the venue, where we saw a disappointed Drake and his crew being turned away, it became clear why: The highly secret demo feed of Thierry Henry’s Inner Monologue was back and launching at the FIFA after-party.

The Monologue has been offline for the past year, mainly because the striker’s habit of developing thoughts, random utterances, and competing and irreconcilable positions on everything from goal-line technology to an irrational anger over the cronut craze, all tended to occur way faster than the existing technology could buffer them.

Thankfully, for posterity, a more advanced chip and complex algorithms have filtered some of the more irrelevant thoughts out, while Henry himself has become a more cooperative subject than the man who felt the original’s promise to “capture his genius” somehow suggested he had “lost a yard.” And now, unbelievably, here I was being allowed five minutes with what the player himself promised was “25/7 access” to his “process.” At this point I should note, for the tech-minded, that the bug in HenryStream™ 1.1.3 that made Robbie Keane appear in Henry’s dreams has been removed in 1.2., though the Bluetooth connection is still slightly flaky. The big advance on last year’s model though, is the search function.

With that latter feature in mind, thinking fast, and after a quick struggle with the interface (“think iOS 7 meets Landon Donovan” said the PR person, helpfully), I was not only able to enjoy the monologue, but grab and order a series of timely recent fragments that answered a question destined otherwise to become a riddle for the ages: What is the true meaning behind #Henrying? The answer may surprise you.

Here then, is the annotated timeline of Thierry Henry’s Inner Monologue on #Henrying.

In the 47th minute of the game, with the score tied 1-1, Henry forces his way through an indecisive Houston defense to score and appears to celebrate by leaning against the post in insouciant fashion.

It turns out he was sketching for a masterpiece:

So few. So few. So few moments. Sure, a chance … chances even appear. We take them or we don’t and BOF! A flick. Or not. But do we stop to smell the roses? No. In Houston this would be inadvisable. And there is no peace. Two Dynamo players approach, Boswell and the Scottish one — the latter ragged and glad for a summer outside, his eyes speaking of deep-fried Gatorade. I know their look: shy, and wondering how to ask for an autograph. I raise my eyebrows and cock a snooki. That’s a thing, right? Cock a snooki? No matter, I’m gone while they’re still nudging each other.

And in open space at last, inspiration strikes. Á danser! I will do a dance. A meeting of forms: Old-world Europe meets modern America. It will be like … what is his name? The choreographer? Bob Foose. The name is on the tip of my thoughts, but the ball distracts me. Annoyed, I push it away into the goal and wander to the post to resume my train of thought. Instantly I am surrounded by more urchins from my own team. “I am thinking of the medium of dance,” I tell them. “Dead friggin’ on, ye beaut, ye,” says the Irish one. For a moment I think I have connected, but they are giggling like the day McCarty brought helium balloons to training.

Moments later, Jonny Steele scores and does this:

I am sad now. Sad for the people who have paid. I can do no more today. I am trying to grow the game, but there is a gulf in understanding. I will have a go later.

Henry scores another game-winning goal, sliding in to poke home at the far post from a Dax McCarty cross. Again, his momentum toward the back post, and again, he rests against it rather than celebrate.

What shoes would you wear? My heart says a desert boot. What did Tati wear in Playtime? I forget. So much falls away from you. And all that is left is an Achilles strain and Petke in a sweater vest calling me “dude.” This I secretly “get a kick out of,” less so the artificial turf samples in the shape of question marks that he mails to my apartment. I say to him, “Dude, the cow that makes the milk for that grin you wear — you give it field turf and expect pearly white? Non, dude, non.” He dropped me for D.C. at home. D’accord. I know I am wasting my time to think of the shoes. It will be cleats. It is always cleats. I asked for studs once and the incidents were unbearable. Manhattan. Wheeee! My eyebrow was raised for a week. Non.

And now here comes the ball again. Low and hard. I watch the Toronto defense manage to avoid it, like elephants regarding bullets in The Matrix. In my own way, I am briefly amazed and entranced at their careful tributes to the low population density of their country, then saddened that once again I must be insensitive. I soften the blow and slide the ball quietly home, then observe a moment’s silence. It occurs to me that my dance should use hands. As I shake the Irishman off my back, Kimura approaches and I show him: I’m thinking something intricate. He mirrors me happily, gurgling with pleasure to be included, but I am not sure about the fingers. I smile though. Work to be done.

Later in the game, Fabian Espindola adds a second goal from an impossible-looking angle, and Henry seems to be acknowledging it.

Actually he is still at work:

HANDS! YES! Definitely with hands. If only to say, “Sure, left and right foot, but there are other limbs we can’t neglect if we are to grow the game.” I love these moments when the idea is right. I want to share with someone, anyone, but they are all absent calming down the Argentine. He is on his feet for once and running in confused, angry circles. I cannot get involved … no matter: I crack me up … HANDS! YES!

At this point, American culture takes a wrong turn in interpreting embryonic moments from Henry’s R&D process, as #Henrying is born.

Luckily for us, Henry missed most of the initial fuss as he was at home repeatedly viewing and pondering the waste of Shirley MacLaine’s serially misunderstood lead in Sweet Charity, while paying close attention to the musical numbers. Although a teammate did fill him in on the Henrying phenomenon, Henry played it cool, happy for the smoke screen for his true creation.

A scrappy, ugly game is settled by an own goal from Dallas’s Erick. But the game will always be remembered for the debut of Henry’s non-goal dance late in the game, after a foul on the edge of the box by Michel. At last Henry’s vision was clear:

Look at them. “Oof!” … “Oof!” … “OOF!” The kicking and stamping of grape crushers addled by their own supply. The Australian is in the middle of it all, of course — larrikin-ing above the knee. I say “The” Australian, but there are two of them now, on backpack walkabouts into midfield fights. Accccchhh. Still, I thank them for one thing: the gift of knowing there is never a truly clean moment to think. If it’s not the mob, it’s the ball, insistent upon me. So it is with my dance. I could wait for the right time, when New York’s descent was the perfect mirror of Paris after the war; two once-moderns saddened by China, now in a symmetry of tristesse. But there is never a clean moment. The salary-capped are always with us, nosing for truffle goals, when beauty is built upon the mud. Now, then? Now. When else? Now! So … I AM IN CLEATS. THESE ARE MY HANDS. THIS IS MY DANCE. REGARDEZ … !

About Last Night: Feel the Roar