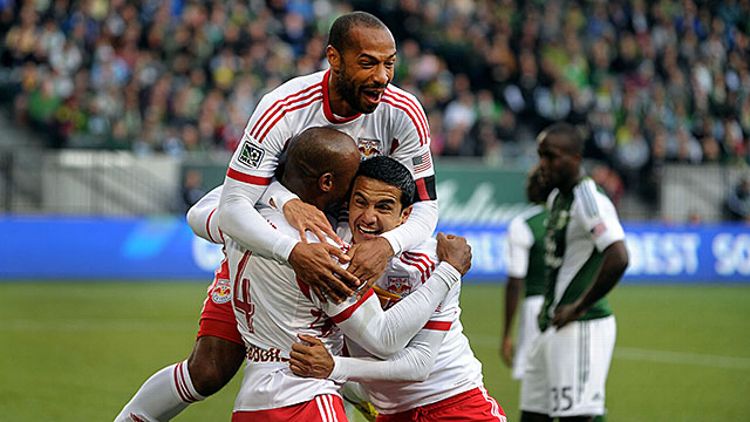 If you’re not sick of top 10s of the year by this time, you should be. Fun as they are, most sane people find them as appetizing as turkey right now. I’m going to try not to add to the glut and instead, by way of marking the new year, share just a few off-field moments that have stayed with me from 2013. They’re not always the sort of details there is room to report on, or even enough in and of themselves to be features, but they’re part of what I’ll remember 2013 for, beyond the best game I saw, etc. (New York over RSL, 4-3, for what it’s worth.)

What a Sense of Ownership Means

On an early summer evening in Richmond, Virginia, D.C. United walked off an already darkened field, after their nine men had squeezed through on penalties in their third-round Open Cup match against their USL Pro affiliates, the Richmond Kickers. As a few D.C. beat regulars gathered in the darkness underneath the giant unused stand that runs alongside one side of the field, and which also houses the locker rooms, United manager Ben Olsen conducted a brief interview about this rare bright spot in an inexplicably troubled season. The four or five of us standing around him could barely see him in the gloom. At one point, in one of the most muted postgame pressers I’ve ever attended, he gently pulled a couple of us to one side as the D.C. team bus backed up toward us, preparing for a quick escape.

D.C. would stay in the competition all the way to the final, before surprising RSL in Utah and winning the whole thing. After the trophy presentation, in a stadium that had emptied with surreal speed, Olsen raced across the field with his players to celebrate with the team’s small group of traveling fans, who were swarming down from the upper deck of the stadium, just as they had galloped to the other end of Richmond’s grounds to witness the penalty shootout in the third round.

After the final, goalkeeper Bill Hamid, who’d been a rock in the game, held court in a champagne-soaked D.C. locker room, talking about what it meant to him to play for the team he once was a fan of. It’s the type of interview that’s commonplace in countries with longer-standing leagues, but it’s still a rarity in MLS (when Michael Seaton made his debut for D.C. United this August, he became the first MLS player who was born after the league was founded). Surrounded by players with greater and lesser (mostly lesser) experiences of what the MLS salary-cap carousel does to the feeling of being rooted, Hamid’s feeling for his hometown club’s achievement felt somehow substantial, as did the reaction of his coach, a one-time celebrated player for the club himself.

As if to emphasize the connection, a couple of weeks after the final, Hamid tweeted out a screen-grabbed picture of himself watching the team as a 14-year-old fan with the Barra Brava supporters …

… and I had one of those glimpses of MLS future, when that sort of image will be a familiar trope rather than a rather nice one-off.

There was another moment this year when a fan’s relationship to his club’s history was particularly resonant. I was at Red Bull Arena for the last game of the regular season and was seated beside Dan Ryazansky in the press box. Dan’s one of those numerous people whose efforts keep the fan culture of the domestic game growing and thriving. His Metrofanatic message board is a long-standing Metro/Red Bulls forum, and he has been a New York fan since the start, god help him.

As a second-half avalanche of goals for the Red Bulls won the club the Supporters’ Shield, I exchanged the odd joke or remark with Dan, who responded in kind and didn’t show any indication of doing anything other than working on his match report and following the etiquette of press box behavior.

When the final whistle blew, though, I got my phone out to grab a short video of the celebrations on the field, then panned back up to Dan beside me, only to see him with his head in his hands, sobbing openly. His team had finally, finally won a trophy. On the field, as I later found out, Thierry Henry was pushing hometown coach Mike Petke toward the South Ward, exclaiming, “18 years! 18 years!” Out of respect for Dan, I won’t be posting the video here (look what you did to the Portland crying man, you mean Internet you …), but trust me, if you’re a fan of any sport whose team affiliation gets counted in decades, you’ll know.

Thumbnail Image of the Year

In my report on the MLS Cup final, I mentioned the way that the mind sometimes misbehaves when asked to correspond with the highlights of what happened in a game. Seth Sinovic’s tackle on Alvaro Saborio late in the second half is my abiding memory of the game. It wasn’t the only time that happened this season. In my ongoing series following the U.S. Open Cup from first round to final, the story about the D.C. United vs. New England quarterfinal never ran. It missed out for no more sinister reason than scheduling clashes, but it did contain one image that will stick with me more than any other this year, and I wanted to mention it while I still have the chance.

Before the game started, I was in the giant sports hangar housing the locker rooms, adjacent to the main field at Maryland Soccerplex. Over to my left, there was the sound of intermittent yells, as a girls’ volleyball tournament got under way. Other kids were drifting in groups to cheerleading practice at the far end of the barn. And a few yards in front of me, New England goalkeeper Matt Reis was shooting hoops with a soccer ball.

Reis retired at the end of this year, after the Revs’ playoff loss to Kansas City. But he’d already taken one leave of absence before the Cup quarterfinal as he dealt with the familial trauma of the Boston bombing, which seriously injured his father-in-law. The D.C. game was set to be his first game back.

He was good, making more than he missed. For a moment, I was the only one watching him. Eventually, his teammates drifted out of the locker room, and a few, after circling Reis respectfully for a few minutes with their own warm-up routines, gradually joined in. Reis shared the ball when asked, but didn’t particularly join in any banter and just looked serenely focused on the task at hand (or as serene as a shaven-headed, gum-chewing veteran goalkeeper can look). Initially, I couldn’t stop projecting the thought that this was part of the keeper finding meditative refuge in a time of duress, but really, after watching for a few moments the activity was enough, in and of itself. So I have no idea whether Reis felt at peace when he was engaged in this ritual. But I know I did while watching him.

I just came across the initial draft of the story from that game and this is how it ends:

“And while I can look at my notes and photos of the game and vaguely remember the Hudson Valley School look of the sky that night, or see that I was behind the goal when Pajoy took his penalty, it’s become clear that my only honest memory of that night is of a moment that might have meant nothing or everything — a grown man playing on his way back to work.”

When Robbie Rogers became the first openly gay player to participate in American major league sports, upon his return to MLS with L.A. Galaxy, the immediate focus was on the social significance. But if Rogers was hoping to ease away from the spotlight after the initial media feeding frenzy, the story was rather complicated by sporting matters — namely the MVP form of Mike Magee, the player traded to Chicago Fire in order to sign Rogers.

The form of the two was inevitably compared, and as Magee’s star rose further, soon the media comparisons began to carry a subtle but insidious suggestion that Rogers’s arrival in Los Angeles was somehow more of a publicity stunt than a soccer decision. The clear inference was that Magee had been pushed out, and that his publicly stated desire to be closer to his family in Chicago was a convenient front to mask that reality. Comment threads tended to be more blunt in their assessment of a “lopsided trade” — few resisted the urge to go beyond the field in assessing the dynamics of it.

I think that version of events does a disservice to both men, especially at this stage. The Galaxy have a lot of questions hanging over them going into 2014, and Rogers, entering his first full season with the club, is one of them, but a former U.S. international brought in to address the Galaxy’s ongoing need for attacking width deserves a chance to provide just that after a proper preseason. As for Magee, I don’t pretend to know for sure what motivates him, but sometimes the simply stated public explanations correspond to the actual facts.

I do know that Magee told me, at the MVP press conference, that becoming a father a couple of years back had changed everything for him; he emphatically added that “family is everything.”

I also know that a couple of days later, on the night of the MLS Cup, I retreated after the game to a BBQ restaurant near the hotel and quickly found myself in conversation with my neighbor at the bar. We soon found out we’d both been at the game and when I asked about his connection to it, he indicated down the bar to his left and said, “My son plays.” A couple of seats over was Magee, flanked by his mother and his wife, next to my neighbor, Mike Sr. They were extremely warm, friendly people and as the evening went on, it was abundantly clear that they were a tight-knit family delighted that their son was back near the family home. And Magee certainly saw out the season like a man happy where he was playing his soccer.

I thought back to sitting with a still-bewildered Fabian Espindola at a preseason media day, as he discussed moving his wife and new baby from Utah, where he’d just bought a house, to New York for what would turn out to be a short-lived stay following the abrupt end to his half-decade with Salt Lake. Or hearing of the justified frustration of Adam Moffat, himself a new father, as an unexpected move from Houston to Seattle was followed a couple of months later by an offseason trade to Dallas. As fans, it’s just possible that we expect players to be automatons in a league in which the rewards are hardly so disproportionately great that they justify the sacrifices some players make in their family lives.

In MLS, the internal trade system, with capology squeezing players into a different time zone at a moment’s notice, can be cruelly capricious to players and their families. It’ll be interesting to see just how freedom of movement is addressed in next year’s collective bargaining negotiations, at a time when the world players union, FIFPro, is taking legal action against the very structure of a transfer system.

With the MLS player/league negotiation, a new TV deal to be signed, and one of those World Cup years that tend to provoke introspection about the current state of the domestic game, 2014 will be a bellwether year for the MLS landscape. Thanks for joining me in 2013. Happy New Year.

The NBA's Winter of Discontent: All the Drama You Might Have Missed This Week