The Designated Player: The MLS Playoffs So Far … 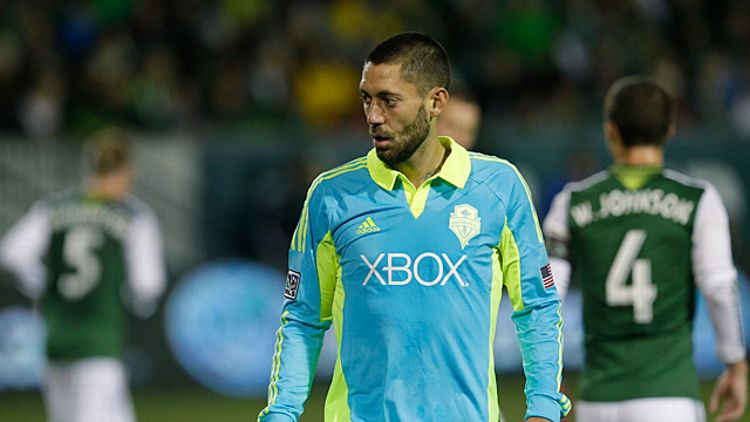 So after a frantic week, the playoffs are nearly done. From 10 hopeful teams we’re suddenly down to four, and among the teams out of the running, there are a whole heap of autopsies already under way — especially in New York, L.A., and Seattle.

After a frenetic burst of games seemingly every other night, we’re halfway through the conference finals, but now face a two-week wait before the second legs.

The four weary teams remaining are now trundling slowly across the plateau toward the final on December 9, and this seems as good a time as any to catch our breath and ask, “What just happened?” In particular, I want to look at the teams that just left us, because we never really had a chance to say good-bye.

The higher a team finishes in the regular season, the higher it’s seeded for the playoffs, with a notional home-field advantage. We’ll get to how this affected individual teams in a minute, but the gap in games for the international week has rendered that home-field advantage fairly absurd.

On Wednesday night, Sporting KC and Houston Dynamo both played 120 minutes of draining semifinal second legs — and found late goals to advance. Both teams then had to travel to Houston to prepare for a first leg Saturday. Games between these two have often been attritional battles more than spectacles anyway, but this weekend’s clash, in particular, had the air of two tired heavyweight boxers that were punched out.

Houston kept the result 0-0 and will get to regroup over the next two weeks, and perhaps you could argue that Sporting KC’s home-field advantage was preserved by the stalemate, as well as the fact that Jurgen Klinsmann would be selecting any players still in the playoffs for the national team friendlies this week. That said, Saturday’s game felt deeply unsatisfying on so many levels, and it might as well not have been played — at the very least, it should have been contended when it didn’t look like the end stages of a dust bowl dance marathon.

I’d link to the highlights but, frankly, the next time you get in an argument with a soccer-hating friend, they’ll be sending the link in an email with the title line, “SEE!”

The other semifinal saw Real Salt Lake overcoming their home-stadium elimination jinx against L.A., then stay at home to welcome the higher-seeded Portland Timbers a few days later. RSL might have had to beat their own demons on Wednesday night, but Portland had just finished an intense series with the archrival Seattle Sounders, and now had to travel to Salt Lake to play the first leg of the conference final some 60 hours later. Portland took the lead off a set piece, but would eventually lose 4-2. RSL’s version of the midfield diamond is still a seemingly intractable problem for the Timbers, which could neither convincingly defend against it or avoid being carved up by it on the counter when they did try to attack. Caleb Porter, having coolly managed his first MLS playoff series under the most testing of conditions against Seattle, must have felt as if his side struggled due in part to not managing resources for its third game in a week.

Both conference final first legs wore the effect of the semifinals in a manner that raised a lot of questions. If we’re going to have playoffs, let’s at least separate the rounds so we can see how x fares against y over two legs, rather than 2(x+z)/2(y+w) = c.

And as New York might say, “Don’t get me started on away goals.”

On Friday I spoke with Jerome de Bontin, the New York Red Bulls general manager, who told me the Red Bulls “feel like champions” for what they did during the regular season. But as I said in the Guardian on Monday morning, there was always that sense the weight of expectation around New York winning something, anything — a weight that lifted with the Supporters’ Shield — was likely to overwhelm coach Mike Petke’s insistence that everything be done one game at a time. As Thierry Henry can be heard saying in the video commemorating that win against Chicago, “Eighteen years! Eighteen years!”

That the Red Bulls lost momentum in the wake of this cathartic win was understandable, particularly against a Houston side that was relentlessly dogged over two legs.

For reigning MLS Cup holder Los Angeles, there was some surprise it had gone out this early in the playoffs, but on reflection, the more even-keeled among its supporters will probably agree this season played out about as well as could be expected.

David Beckham was overvalued or undervalued depending on who you talk to, but there’s no denying that a team with a midfield calibrated around his strengths was going to take time to adjust in his absence, and that’s what happened. And never mind that half of Mike Magee’s career season was spent at another club, or that the goalkeeping was once again an issue. This was a team that matched up to Bruce Arena’s equivocal preseason assessment when I spoke to him at the combine: “We’ll have a … competitive team this season. People shouldn’t worry.”

Arena duly developed a raft of young players, particularly in attack (though Kofi Opare was the late-season breakout in central defense), and guided the team through an awkward transitional year that never hit the depths of 2012 or the heights of 2011. He kept the Galaxy on target in the CONCACAF Champions League and generally managed a Gold Cup/Landon Donovan sabbatical/World Cup qualifier/summer friendly/all-around fragmented schedule as well as any team could have expected. The Galaxy made the playoffs and, perhaps in that moment when Javier Morales’s 84th-minute free kick was disallowed for RSL, might have seen a glimmer of a chance of stealing the series in extra time or on penalties, but with Donovan and Robbie Keane nullified, they looked in need of a rest and regroup for next year.

Speaking of regrouping, Jay Heaps has produced a great turnaround at New England in his second year. A lot has been made of the young and dynamic strike force that came up just short against Sporting KC in the conference semis, but for me, the standout player was Jose Goncalves, the Portuguese central defender who ran the Revs back line, cleaned up, and generally had a comparable influence to that of Jamison Olave in New York.

Next year is going to be an interesting year for New England. Juan Agudelo will be off to Stoke, and Diego Fagundez will no longer be an unknown quantity, but the Revs are growing, standing, and falling largely as a young unit.

Dempsey arrived in Seattle this summer as one of the most high-profile signings of the recent MLS era — a top American player coming back to the domestic league at the peak of his career. He was battling an injury, but it couldn’t mask the euphoria in the Pacific Northwest. Here we saw the familiar triumph of hope over expectation, that a talented human being could overcome all the physical and mental contingencies of such a move, and just plug and play at a consistent league-beating level. Beckham, Henry, and Tim Cahill (to name but a few eventual successes) could have told you it doesn’t work like that, and Dempsey was no exception.

Dempsey never had time to get fit before he was needed and didn’t score until the last week of the regular season. Given the way the season ended, he sealed the impression that in 2013, he was not the final piece of the puzzle to put the Sounders over the edge; he was more like Tino Asprilla arriving at Newcastle’s 1996 team in time to be blamed for its collapse. When Seattle beat RSL in mid-September, it looked to be easing into Shield-winning form. It would find itself picking the bones out of a seven-game winless streak by the time it skidded into the wild-card game.

By that time, and by the time Seattle took on Portland in the conference semifinals, Sigi Schmid had had no choice but to go all-in on Dempsey. The diamond formation was adopted to allow Dempsey, Lamar Neagle, and Eddie Johnson (whose late-season grumblings are an ominous portent for the offseason) to play at the same time, and it had moderate success, only for Portland to pass through and around it at will in the semis. The sight of Shalrie Joseph as a makeshift center forward laboring through the first half in Portland was a sad reminder of how much emphasis had been placed on Dempsey, and how little he was ever likely to do in his short time with the team.

Next year should be different, but after another postseason failure, it’s entirely conceivable Dempsey will find himself playing under another coach. He shouldn’t, but only if the Seattle hierarchy takes the step back to realize that buying Dempsey was about Dempsey being available in 2013, not that it meant the Sounders were going to win in 2013. If it holds on to that thought, it might end up with the type of contribution Cahill made for New York this year. If it doesn’t, then its “little brother” down the road in Portland may be set for an unprecedented period of dominance, as the Sounders thrash around for a solution that’s in front of them: patience.