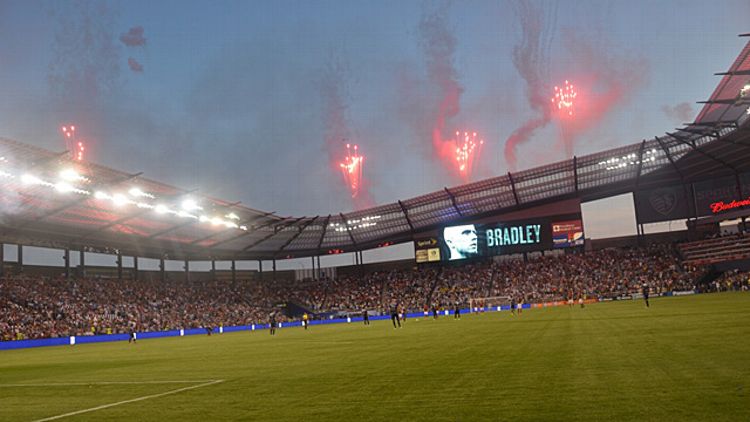 I’m in a dark wood-clad, faux-Edwardian drawing room off the lobby of a luxury hotel in downtown Kansas City. I’m waiting to interview Italo Zanzi, the American CEO of AS Roma, which is in town to play the MLS All-Stars. Somewhere behind me a TV screen is showing a preseason game between Manchester City and AC Milan. A loud middle-aged man in chinos is pacing the room, cursing out what I hope, for her sake, is his ex-wife on his cell phone. As he’s bemoaning her lax morality and linking it loudly to her use of his money, Rudi Garcia, the French coach of Roma, enters the room, edges warily round him, and makes his way past me to watch the screen, followed by a couple of his players. “What’s the score?” he asks in Italian. An American hotel guest who’s been watching the game looks up and answers in English, as though such a request were commonplace: “5-3. It was 5-2 after 38 minutes.” “Cinque due?” The cluster of Roma staff pulls faces at this scoreline. I glance at my laptop. The Guardian homepage is highlighting a video clip of Chelsea arriving in Washington D.C. for the International Champions Cup. The angry man, whose voice is pure antebellum throwback, is still booming out comments to the effect that he’s a God-fearing man just looking out for what’s right — seemingly unaware of the creeping perniciousness of global soccer infiltrating his environment and further undermining all he has ever known and held dear.

It’s the type of moment that recurs during All-Star week — when the ongoing global economic and cultural business of soccer touches down locally to create moments of radical juxtaposition. And if there’s an abiding impression from All-Star week, beyond the parties and exuberant spectacle, it’s perhaps of the global business of the game going on in America — and if there’s something remarkable about it, it’s perhaps that it’s no longer remarkable.

America’s role in the soccer world has gone from splendid isolation to state of exception to outpost to ripe terrain. The Chelsea footage was surprising more for the fact that it was considered notable. (Chelsea is always touring America. Farmers in the Midwest know it’s summertime from a picture of Frank Lampard flirting with the idea of ending his career in MLS, located in the center pages of their almanacs.)

Kansas City hosted this year’s edition of the All-Star Game, and on the sport and entertainment side did the game proud. The week leading up to the contest was marked by open-air concerts in the city’s Power & Light District, where thousands of people jammed a public square surrounded by clubs and bars to watch performances by the likes of Macklemore. This wasn’t MLS as secret handshake — for this week at least, this was the big event in town. On the sideline at one event I saw Merritt Paulson, the young and ambitious owner of the Portland Timbers, gazing out over the throng thoughtfully. Portland is hosting next year’s game.

When I described the MLS model of an All-Star game last year in Howler, I emphasized there was something at stake in the game — in that it was better for MLS to win because a win wouldn’t change anyone’s minds about the league, but a loss might harden prejudices against it. Looking back at that assertion, I’m not sure I still wholly agree, or at least it’s more of a minor note to set beside that abiding impression of business being transacted everywhere I looked. Side meetings took on whole floors of the team hotel as well as the public spaces. All-Star week is a complex constellation.

Returning to the team hotel, where I am also staying, on Tuesday night, I stop in the hotel lobby to use the Wi-Fi to check my e-mail. A workstation is fully jammed up with MLS Digital staff and a lone writer from Corriere dello Sport, so I make my way over to an open chair, only to see Red Bulls global football director Gerard Houllier deep in conversation with Tim Cahill at the adjacent table. It’s transfer season and being a vaguely familiar hack around the press room at Red Bull Arena, I don’t want to look like I am eavesdropping, so I go to the far corner of the lobby and sit down, only for Sunil Gulati and Sounders GM Adrian Hanauer to almost immediately sit down at the next table and glance at my laptop briefly before starting a sotto voce conversation. I look over at the one remaining open table beside a group comprised of mid-30s-looking businessmen. I’m about to wander over when I remember commissioner Don Garber telling a media scrum earlier in the afternoon that he was about to meet with six possible ownership groups. I glance at the group of young businessmen again and mentally profile them. I go to my room.

Within this view of the week, as interesting as it was watching Roma shackle the All-Stars with a disciplined performance, it was equally intriguing to see the close-up operations of its new American ownership brokering the experience of a very particular club culture to and from an American audience.

At times it was redolent of the early days of English teams coming over to play in the All-Star game. Just like those coaches, Garcia seemed initially bemused by the idea that he should know anything about American soccer — though by the postgame press conference he seemed relieved his side had actually been in a game and was bemoaning the late goal it conceded. Perhaps it’s more understandable because for Garcia personally, and Roma, this foray into America is new. The first major Italian team under foreign ownership, and American ownership no less, seemed cautious off the field as the entire club, players, and staff adjusted to the much more open culture of American media access. And inevitably there were moments when the ownership’s American reps’ way of easing them through that process, while respecting established ways of doing things at Roma, created slightly stiff moments. Not that there was anything fraught about it. It just made for an inversion from the norm to see a big European club doing any version of treading lightly on American soil.

It’s the official pregame press conference at a function room in downtown Kansas City. The Roma great Francesco Totti is answering a question in Italian, which is haltingly translated, then Garcia adds a follow-up in French, which is similarly eked out into English by the translator. The impression is of a stream buffering repeatedly. A few minutes later the Roma staff exchanges places with the MLS delegation — Totti and Thierry Henry shake hands. The questioning starts again. Henry rattles off a list of MLS teams in one answer then fields a question in French from a Montreal reporter. The MLS press officer asks the pair to repeat it in English. “And Spanish after?” jokes Henry, before repeating his answer in English. He’s been here a moment.

In the end, discussions about whether the All-Star game has outgrown its recent format are entertaining, but if not missing the point, they are not the only point. In a country this size, occupying the place it does in the global soccer ecosystem, and with a league whose publicly stated ambitions are about measuring itself within that system, All-Star week is the format.