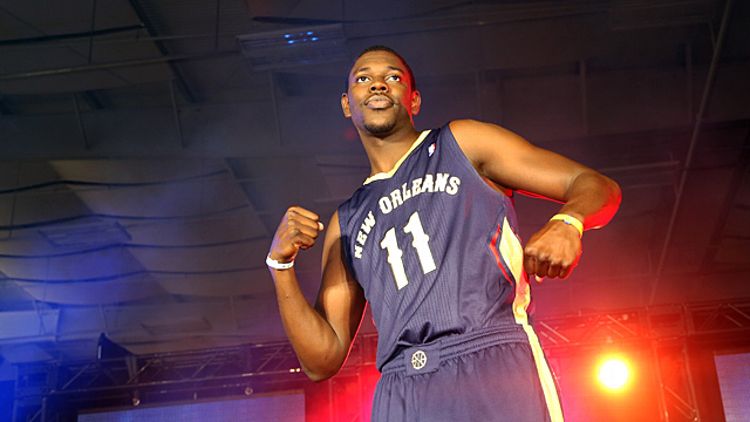 Since this is about fashion, let’s charitably call the initial reactions to the unveiling of the New Orleans Pelicans’ new uniforms beige. Or maybe taupe. Possibly even mauve, but I don’t want to overstate my case. The specific whys and wherefores of what makes the design at best plain are lucidly plumbed by UniWatch’s Phil Hecken here, and I’ll leave him to it because I’m not interested in dissecting the design itself. What concerns me more is people calling the designs “awful” or “terrible,” words with their roots in awe and terror. The uniforms by themselves inspire neither of these things. What should inspire them is the type of design process that likely created them: a committee-driven averaging-out that is antithetical to what’s at the pulpy, bloody heart of our love for sports.

Without being party to the entire process that led to the final version of the Pelicans’ unis it’s difficult to say, but everything about what was presented yesterday screams “test-marketed” and “watered down for mass consumption.” Much like the Oklahoma City Thunder’s home and road jerseys, these seem created to move without leaving a wake, to recede from our sight even as they pass before us. But they can’t achieve the timelessness of a design like the Celtics’ or Spurs’ or Bulls’ because of the little nods to being different: the weird lesions that most, but strangely not all, of the numerals feature; the odd decision to not feature the name “PELICANS” on one of the designs; the way “NEW ORLEANS” is smaller than the player’s name on the back of the jersey.

None of these things are revolutionary or radical, but they stand in for choices that might have been. As someone who’s studied graphic design, I can all but guarantee you that along the way there were crazy and outlandish ideas that got crumpled up and tossed while safer, more reasonable choices were retained. Through round after round of proposal and revision, the sharp edges were whittled away, the rough edges were smoothed, and now we’ve been left with this: the sum total of a thousand choices, a thing that’s acceptable but hardly gripping or galvanizing.

It is, in short, the nightmare of every sports fan who wants the best player taking the last-second shot, who prizes hero ball, who wants the author of destiny to be a single human being working at his or her competitive and creative peak. But it also shouldn’t be mistaken for the fever dream of the analytical fan who craves solid play design in a game’s waning moments. The Pelicans’ new uniforms are why collaboration is misunderstood.

Collaboration — teamwork — shouldn’t be about making everyone happy; it should be about pushing aside the tired, the picayune, the bland in favor of the best (not safest) ideas. A good end-of-game possession doesn’t mean valuing everyone’s shot equally over valuing your best player’s. It means deeply and clearly understanding how everyone can best contribute and then maximizing those abilities.

If hero ball is the clearest path to a lay understanding of individual greatness and creativity, genuine collaboration is the harder-to-find, more demanding route to the best possible result, one that honors and rewards the individual only when individual desires give way to a success that goes beyond the self. But if banking on one person’s unabridged abilities holds pitfalls, collaboration holds its own in the form of bland competency. At the bottom of this pit is where you’ll find the Pelicans’ jerseys.

The empty feeling in your gut as you beheld the Pelicans’ uniforms was not caused by the things themselves. The jerseys were merely inoffensive, plain, meh. That stark reminder of your own mortality came from an intuitive understanding that the universe’s sole demonstrable desire is heat death, a gradual descent into entropy that’s not nearly as exciting as it sounds. See, chaos — scientifically speaking — is not wild unpredictability but absolute indistinguishability across the entire universe. T.S. Eliot was right: the world ends not with a bang, but a whimper of navy, red, and gold, with little bumps on the numbers.

The MLB Weekend Top 10: Nolan and Billy, to the Death