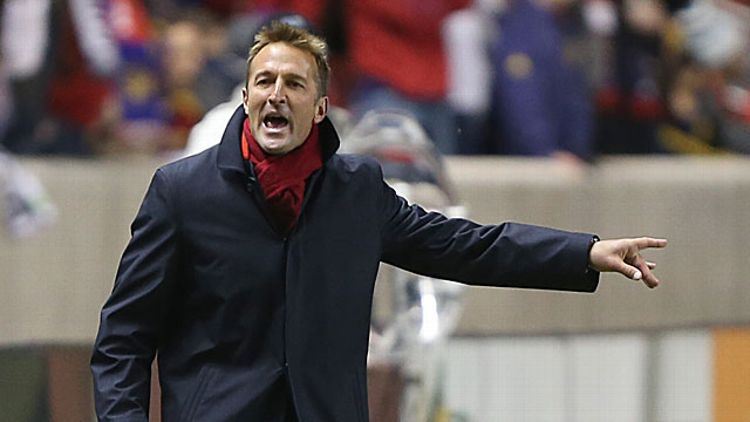 New York City FC has a lot to get right in a short amount of time, but appointing Jason Kreis as their first head coach is a very good start.

Since the team was announced back in May, the MLS expansion side has been under intense scrutiny — not just for the possible appointments they make, but also for any signs that might betray a tin ear for the dialect of soccer in America. That’s partially to be expected: The ownership at Manchester City aren’t so naive as to think that name recognition alone would see them welcomed without reservation in the U.S. — especially in the tribal world of football. That said, the NYCFC admin might have been surprised to be immediately labeled Chivas Mark II and asked to prove otherwise with their every move.

The other 2015 expansion team, Orlando City, already exists as a competitive entity, and their English head coach, Adrian Heath, has brought them considerable success at the USL Pro level, where they are reigning champions. But considering the scrutiny surrounding NYCFC, it’s impossible to imagine a scenario in which the appointment of an English coach — even one with American coaching credentials and a Manchester City playing background such as Heath — would fly as a credible appointment in MLS circles. NYCFC appointments have to walk the tightrope of being at once part of the global vision of Manchester City while also indicating absolute respect for, and knowledge of, a local context to avoid being labeled arrogant or even imperialist.

They also couldn’t come with too much baggage. For example, I tried to imagine what would happen if NYC had managed to lure Bruce Arena, but that would have been somehow too aggressive a statement of intent, and Arena’s need for a well-run fiefdom wouldn’t jibe with the City infrastructure anyway. Other coaches are too embedded in the history of the league. NYC couldn’t have appointed a returning Bob Bradley, or even a coach like Dom Kinnear, whose real-politic take on the MLS system makes his teams consistently literate in what needs to be done to manage an MLS schedule, but somehow too parochial to speak meaningfully to the wider context of the larger City structure.

Kreis, though … The minute his name first came up a few months ago, it felt right. Kreis knows MLS, has succeeded in the league, tries to play attractive soccer within sensible limits, is young enough to learn, but has done enough to be trusted. And he’s someone who can be entirely his own man while not blanching at the “holistic” vision Manchester City — and chairman Ferran Soriano in particular — have for the organization.

That vision has endured its fair share of sneering in the U.K. press, but in exploring everything from open-sourcing match data, to quietly buying up and developing land near City’s stadium into a huge academy, to their engagement with America via NYCFC, City have been nothing if not creatively ambitious. They’ve also tried to develop this via a long-term ethos that has run counterintuitive to the prevailing mythic archetype of Premier League soccer — a myth that begins and ends with Sir Alex Ferguson.

Watching Roberto Mancini chafe his way out of the club culture seemed puzzling to those who saw successful management only in terms of the type of dominant cult of personality that could emulate Ferguson — surely this is what the club needed, wasn’t it? The fact was, after ending the club’s trophy and title drought, Mancini had in some ways done as much as a coach of his instincts and ego could within the long-term project of that particular club. The type of power base and recruitment policy he sought to build off those trophies was never going to be possible, or in the eyes of those running the club, desirable.

Manuel Pellegrini — early mixed results notwithstanding — is a better fit, and when the news of Kreis’s appointment in New York was followed by news that he would be shadowing his Manchester counterpart, alongside other key figures on the sporting side such as Patrick Vieira and director of football Txiki Begiristain, it was somehow easy to envisage Kreis in dialogue with these men. Imagining the same dynamic with Mancini, you can only see Kreis enduring one of the Italian’s alternately charming and vengeful monologues with the type of steely, indifferent patience he has perfected in Real Salt Lake press conferences down the years.

Kreis is comfortable with systems. That doesn’t mean he looks less at the individual potential of players and more at their utility; while it’s true that he and GM Garth Lagerwey never altered the RSL team to build round a talented individual who might unbalance as much as he contributes, he and his staff took great pleasure in developing individuals within a clear system.

Sebastian Velasquez may have missed the penalty that would have won RSL a second MLS Cup, but he’s a perfect example of a Kreis protégé. When I spoke to Velasquez the day before the final, he could not praise his coach enough: “He’s in there with us, sweating, all through training. He won’t ask us to do anything he won’t do himself.” Velasquez embodies the type of vision and development Kreis and his team specialized in — during the 2012 draft, when Velasquez was picked, there was a great moment on ESPN when all the analysts looked up from their notes and conceded, as one, that they’d never heard of him.

Velasquez has slowly become an integral part of RSL’s rotating midfield in the interim. RSL players Instagrammed pictures from Kreis’s house this week as they gathered so he could confirm his departure in person. The genuine affection and respect they had for him was self-evident then, as it was when I spoke with them in the losing locker room after the final. Despite their disappointment in the result and the fact this was likely to be Kreis’s last game, there was not a single suggestion of resentment that he was moving on to the next challenge. It was no surprise that the final decision was confirmed only this week, after Kreis had spoken to the players first.

After a family holiday, and his Manchester education (beginning in January), Kreis will be doing his explaining in New York from now on, which leads us to this appointment’s only caveat. New York is an infamously impatient sports town at the best of times, and there’s a version of events in which Kreis is not given the time he needs to get the new team functioning within City’s vision, let alone getting over the “standing start” challenge that gave Toronto FC and Philadelphia Union initial enthusiasm and diminishing expectation in their markets. The stakes are even higher in New York, where the league, let alone City, have banked a huge amount on the success of an NY2 team. If NYCFC persist with Kreis, though, there’s little doubt they have got a good one. Perhaps the only one.