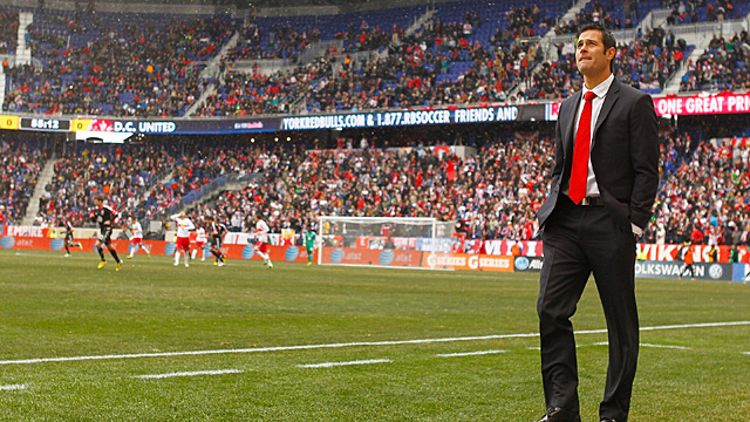 In Part 1, Mike Petke discussed the cultural change that had allowed him to become Red Bulls head coach and his attempt to once more change the culture of the team to one that was more “accountable.”

When you hear Mike Petke talk about accountability, your mind inevitably wanders to his relationship with veteran New York Red Bulls director of football Andy Roxburgh, who is a very visible presence at the club and who appointed the rookie coach at the start of the season. Before my interview with Petke began, I’d watched Roxburgh, a prominent figure at New York training sessions, running a penalty shootout to end one such session — a shootout that incidentally was settled by Petke scoring. I was curious how it had been for Petke to have the former UEFA technical director above him at the club. There was already scrutiny surrounding an untested coach occupying a position usually given to more proven veterans. Had there been a point in the year when he’d had to push back a little and assert his authority on the side?

“Andy has never stepped over a line. And by all means, he’s my boss, so he could step over whatever line he wants. He never has. But Andy, with all his experience, is a great sounding board for me. The one thing that Andy’s always made clear, and to his credit he’s always stuck with, is he said from the first day, I’m here to advise you. And anything you need I’m going to help you with. At the end of the day, you pick the team, you pick the lineup, you pick the strategy, you pick the formations.’ As stubborn as I am, and as competitive as I am, I’ve learned to realize very quickly that he’s not here to undermine me, he’s not here to hurt me, he’s here to help me.”

Another figure who has come to exemplify the Petke era in New York is Tim Cahill. In the second half of the season, when the clutch goals began coming (such as a 97th-minute equalizer to put New York in the playoffs and a goal after eight seconds in the very next game), Cahill has seemed to personify the mental and physical toughness Petke wants all over the field.

“Tim represents — he embodies — the spirit, the mentality, and the character of the South Ward, for sure. When we play, we never give up. That’s all the supporters want. It’s easy to say they want a championship, because of course they do, every supporter in the world wants a championship for their club. But even far above that, if we go out and we never say die and give everything we can, then at the end of the day they’re not booing, because we gave everything we can and that’s what they want.”

When Petke talks about those fans, it’s as a member of a generation of young MLS coaches slowly transforming the face of their profession in the league — many of whom spent their playing careers here and are intimate with the history both on the field and of the surrounding supporter culture.

“It’s amazing to me that from ’98 I could see faces above the tunnel in Giants Stadium when I walked out. And I could walk out now in the next game we have at home against Chicago, to the South Ward, and see dozens of the same faces.”

We talk more about what a big moment we’re at in the league, where kids who once watched games are coming out of the stands to play on teams they once followed. “I remember in ’98 when I joined the MetroStars, the old New York team. At that time the people who were coming to the stadium were people who … perhaps their parents were that generation who weren’t familiar with soccer, but their kids were starting to play, so they brought them along. And I remember hearing the same recurring theme: They were waiting for those kids to grow up. They [the league] were waiting for that bridge. I think we’ve seen a lot of that — kids who grew up in soccer.”

Petke, in his own way, is like one of those kids grown up — a kid who came up on hip-hop. I asked him about quoting Eminem at a press conference when asked about an infamous training-ground bust-up with Thierry Henry:

“‘Tornado meets a volcano?’ I love it! I’m a very eclectic music man. I like everything. Hip-hop has been big in my life for years and I thought it was appropriate in the context of the question that was asked to me, it was the first thing that came into my head.”

So if you win an MLS Cup are you going to drop the mic after the press conference?

“I’m for sure not going to answer that question at all. Scratch that from the record. I’ve become overly superstitious this season, I hate it. I’m probably going to need therapy when the season is over.”

I remind him that after the last couple of games, he has finally suspended superstition enough to speak about the Supporters Shield:

“I think superstition went out the door there because we’ve accomplished our first goal, and now with results elsewhere we’re out of the play-in game now, so the worst we could do is third. But our drive is no different and we’re looking forward to the next game.”

If New York and Petke win that game, against Chicago, they’d win the Supporters Shield. Were they to do so, it would not only be the first time the team had that trophy, but would be the first time they’d won any trophy, unless you count the Emirates Cup — in which case you might as well count Tim Cahill beating Drake at the New York launch event for FIFA 14 …

This may or may not be the first New York team to win a trophy. The Shield isn’t secured and the playoffs are their own lottery. But Mike Petke has tried to set down some standards of success that unite both a boardroom in Austria and a rowdy collection of fans in New Jersey. And he looks remarkably relaxed about how well it’s going right now.