The Decline and Fall of the Glasgow Rangers Empire 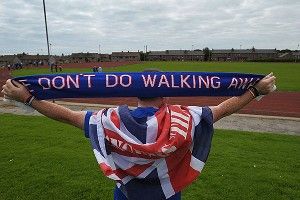 This Sunday, Glasgow Rangers FC will play a league match in England for the first time in their history. Glaswegians have been hoping this would happen for a very long time, because both Rangers and their bitter rivals, Glasgow Celtic, dominate Scottish football to an absurd degree, but struggle to compete in European club competitions. Their control of the domestic game is total; it’s been 28 years since a club from outside Glasgow won the league, and in the last 17 seasons, the Old Firm have occupied the top two slots on all but one occasion. The lack of competition from the rest of the Scottish Premier League (SPL) means television networks aren’t prepared to pay top dollar to cover the competition, and the Old Firm believe that this prevents them from competing with other European clubs. As such, both sides have been desperate to play their league football in England ever since the sport started attracting big television money back in the early 1990s.

Well, sometimes dreams do come true, but it seems Rangers fans should have been more specific with their wishes. Their opponent for their historic away game on foreign soil this Sunday won’t be Manchester United, or Chelsea, or even Norwich or West Bromwich Albion. Instead, Rangers’ first-ever league trip south of the border will be to the glamorous environs of Shielfield Park, where they will play Berwick Rangers in the Scottish Third Division. Berwick are one of those unusual clubs who play their league football in another country, partly because it’s more convenient for all concerned, but also because they’re so tiny that no one really cares. This was not the English-based league football that Rangers fans had in mind, then, but how did they end up in such lowly surroundings? Well, the origins of this precipitous fall are best explained by an old joke, “A pound coin was thrown onto the pitch at a Rangers game last night. Police are trying to determine whether it was a missile, or a takeover bid.”

Turns out it was the latter. Rangers had won the SPL in the 2010-11 season, but they were so heavily in debt that they ended up being sold for the princely sum of one British pound to a businessman called Craig Whyte. Nine months later, the club went into administration, leading to an automatic deduction of 10 league points, which effectively handed Celtic the 2011-12 title. That turned out to be the least of Rangers’ problems, as the administrators revealed debts totaling at least £124 million, and announced they would not be prepared to allow Rangers to continue trading while insolvent.

Luckily, Whyte found another buyer for Rangers, and he even made a 100 percent profit on the deal, selling the club to Charles Green for two pounds. Drastic measures were required if the administrators were to be appeased, and so Green dissolved the club and sold all assets and debts to a new company, and formed a new Rangers. Although the name, stadium, kits, and fans remain the same, the 2012-13 Rangers team is technically a different club, meaning that Newco Rangers (as they are now unofficially known) were forced to reapply to the SPL for membership, which involved securing the blessings of the other 11 SPL club chairmen. To recap, those would be their bitter rivals, Celtic, and the 10 other clubs who’d spent the past couple of decades being told that they were holding Rangers back, and how fortunate they were to have Rangers in their midst. No prizes for guessing how that vote went.

Newco Rangers then asked the governing body of Scotland’s lower leagues, the SFA, if they could be admitted to the Scottish First Division. The SFA laughed heartily, shook their heads, and pointed Rangers in the direction of Division Three, which is why Rangers will face Berwick Rangers for the first time in league football this Sunday. To give you some idea of the gulf between the SPL and the Scottish Third, consider the following clips. First, here’s footage from half time at last year’s Rangers v. Celtic SPL clash at Rangers’ stadium, Ibrox:

As you can see, it’s a very different atmosphere in the Third Division. Rangers will have played at these grounds before in cup matches, of course; for example, they famously lost to Berwick Rangers in the first round of the Scottish Cup in 1967, and they’re also well acquainted with Queens Park’s stadium, Hampden. Hampden is bigger than Ibrox, and when it’s not hosting Scottish Third Division ties, it’s the home of the Scottish National Team, and also the venue for domestic cup finals and three European Cup finals (compare and contrast these two classic Hampden matches: Real Madrid vs. Bayer Leverkusen and Queens Park vs. Alloa Athletic). But playing an entire league season at this level is a very different experience from one-off cup games, and many star players chose to walk away rather than sign new contracts with the Newco. Even so, Rangers have managed to retain the services of some illustrious players, including the USMNT captain, Carlos Bocanegra. International footballers are rarer than unicorn droppings in the lower leagues of Scotland, but Rangers were able to field nine of them for the visit of East Stirlingshire to Ibrox last weekend, watched by a crowd of 49,118, breaking the first two of many Third Division records that are expected to fall this season. Unsurprisingly, Rangers fans are confident that their own team will do well over the next three years. What may happen across Glasgow at Celtic Park, on the other hand, is causing them many sleepless nights.

Few things are certain in life, but the best odds in football betting right now are on Rangers’ winning three straight promotions, and Celtic winning three straight championships in their absence. This will bring Celtic to four consecutive titles, placing them within sight of the most important record in the dynastic world of Scottish football: nine in a row. This is a jointly held record; Celtic achieved it between 1966-74, Rangers between 1989-97, and if it’s ever broken, bragging rights in Glasgow will be secured for a generation. (To get a sense of how important this is in Scotland, check out the highlights of Celtic breaking their curse in 1998.)

To achieve this feat, Celtic will have to win the league every year until 2021, and while this may seem a long way off, bear in mind that they’re practically home-free until 2016.

What happens after that will largely depend on Celtic’s fortunes in the Champions League. Their next European match is on Wednesday, a crucial return leg versus Helsingborgs to decide which club will qualify for the highly lucrative group stages of the competition. Celtic beat the Swedish side 2-0 in the first leg, and barring a collapse in the return fixture, they will pocket a minimum of £17 million in prize money and TV revenue. This will clear Celtic’s debts (currently around £7 million), allowing them to hang onto star players, sign new ones attracted by the allure of playing on club football’s biggest stage, and greatly improve their chances of qualifying for subsequent Champions League group stage windfalls; by the time Rangers return to the SPL (and European competition), Celtic could parlay that financial edge into a dynasty that could last a generation, and claim the most important record in Scottish football.

It’s strange to think that the fate of these two clubs for the next decade may well be decided by a handful of games against the lesser lights of European football, but the Old Firm’s domestic fortunes are now so predictable that any edge one can gain over the other can make a big difference. Sunday’s game against Berwick Rangers may well be the historic fixture for Rangers, but the important one for the club’s future is Wednesday’s game at Celtic Park. You can bet Rangers fans will be making very specific wishes for an unlikely outcome.