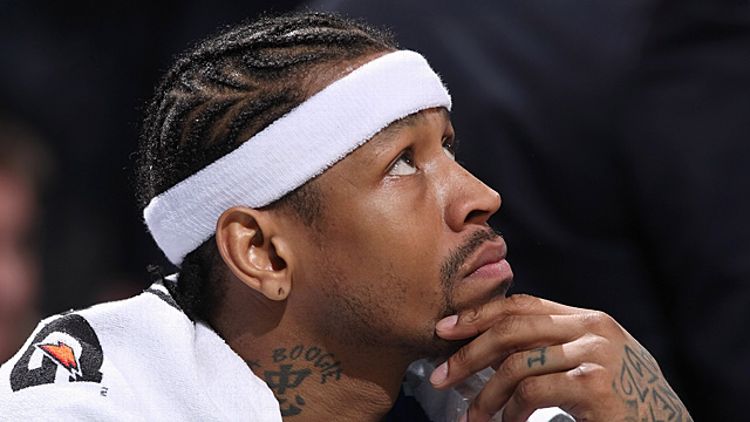 After the first day of the Memphis Grizzlies’ 2009 training camp, Allen Iverson ate a bag of Doritos and a Styrofoam carton of fried chicken wings in a Birmingham hotel room. The grub came from an eatery called Hong Kong Seafood, a grimy joint where junkies knocked on vehicle windows in search of spare change. I picked up the order with Gary Moore, Iverson’s longtime coach/manager/parental figure. Riding in the rental car on the way back to the Hyatt, Moore addressed the impending starting lineup battle between his man and third-year point guard Mike Conley. “They better not have him playing behind these sorry motherfuckers,” he said, piloting the car through the Alabama darkness.

I was there on an assignment for a men’s magazine that had shockingly agreed to print a 3,000-word story about an icon in the waning light of his career. The passion in the pitch must have been a contagion: Iverson is my favorite athlete of all time, and by such a wide margin that there isn’t a second place. I’ll still vehemently argue that he was the most culturally significant figure in sports since Michael Jordan. At any rate, I’m thankful I cashed the check before he bolted ingloriously from the Grizzlies after a measly three games.

That night, Iverson ate his dinner while seated on the bed. He flipped the TV between a WNBA game and a CNN special about the death of Michael Jackson. Our brief scheduled interview was dreary. No admirer of the media — for many valid reasons — he rasped canned anecdotes that he had unspooled elsewhere (the one about cops with cornrows even resurfaced in Wednesday’s retirement press conference). But when he joked with a childhood friend who was sprawling on the carpet with a cup of Hennessy, it became clear that Iverson’s awkward public speaking was a product of self-censorship. This is what it sounded like when he discussed Michael Jackson, his idol.

That motherfucker … he may be the greatest motherfucker on earth. His daddy heard that motherfucker and said, “Man, you gonna make fucking billions. You the fucking shit, man. I’m gonna stay on your ass and make sure you gonna be the shit.” It worked too. Mike said he never got ass-whupping at auditions and singing and dancing shit, like his brothers used to get they ass-whuppings. He never fucked up in that.

Iverson cursed more than anyone I’ve ever met. He also unspooled a segue about Bubbles, Jackson’s pet chimp, transcribed here for your enjoyment.

I wonder where Bubbles at now. I know he hurtin’. Anybody that love Mike and got Bubbles knows how Bubbles get treated, man. Bubbles got more money than you. Man, look. Jermaine Jackson said he was over there, and you know how Bubbles used to be around his kids all the time? Now this is a goddamn monkey that will slap your head off. And then they brought the baby over there and Bubbles went over and kissed the baby on the forehead … I ain’t takin’ in no damn monkey!

We’ve all heard about Iverson’s ragged background in Bad News. The young mother, the raw sewage on the floor, the unpaid utility bills, the friends shot dead. But that’s not so different from the forsaken places from which LeBron James — a guy who sits front row at fashion shows and has turned his old friends into a sports representation powerhouse — and so many other professional athletes have emerged. The difference is that Iverson never altered an ounce of his marrow.

Iverson’s retirement presser was an emotional experience, one steeped with regret, even as he steadfastly refused to have any. He admitted his flaws, expressed cynicism toward the media, and wore his heart on the sleeve of his oversize leather jacket. Maybe this is generational bias, but it’s difficult to imagine another basketball player who could conjure such a mix of powerful feelings that resonate with so many people.

I always admired Iverson’s ferocious unwillingness to compromise. That was his magnetism. It wasn’t a marketing plan. It was real. Or at least that’s how it seemed, even as he eventually trimmed the braids and begged for an opportunity on an NBA bench. Who cares if his career was cut short because he refused to accept a role on the bench or subscribe to the Steve Nash quinoa diet? That doesn’t detract from his importance.

But when we hear about his alleged personal problems — with his family, with money, with alcohol — it’s clear that the price for stubbornly adhering to a flawed code was steep. Watching him speak yesterday, I thought about a 34-year-old man eating greasy wings on the eve of what was supposed to be a fresh start. And I wondered if our fetishization of his authenticity might have been selfishness cloaked as worship. Either way, Allen Iverson was and is the greatest.