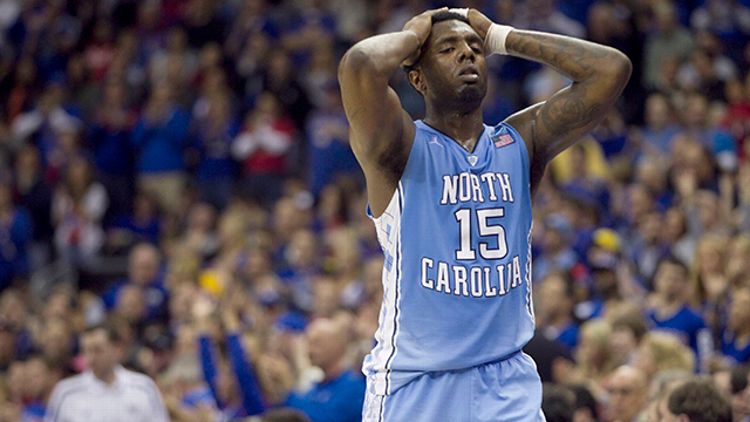 You can’t go very far these days without hearing a sports fan say, “I can’t wait until college basketball starts.” I’m not sure why they keep mispronouncing it as “football” — it must be a joke I missed, or a meme, or something — but the anticipation in the air is palpable. We’re still a few months away from tip-off, though, so here are a few bits of news you may have missed during the long offseason. November’s coming!

On a Scale From 1 to Johnny Manziel, P.J. Hairston’s Idiot Ranking Is 8

With all his noteworthy teammates opting for the draft, P.J. Hairston was set to be North Carolina’s primary star in 2013. You could argue he was last season, too, when the sophomore guard led the team with 14.6 points per game while averaging just 23 minutes, and shot nearly 40 percent from 3. Everything about his game improved from his freshman season, and he’ll arguably be the best pure scorer in the ACC this year.

That is, if he plays. Because P.J. Hairston, while not demonstrating Johnny Football levels of stupidity, has still taken great measures to undermine himself, screw his team, and embarrass his school this summer. It started in early June, when he was arrested at a license checkpoint while driving a GMC Yukon with two buddies in tow. Someone threw a bag of marijuana and a 9mm handgun out the window, and the police found more drugs inside. It turns out the car was a rental purchased by a convicted felon named “Fats” Thomas (yes, seriously), and this was the second time Hairston had been stopped in a car connected to Thomas.

Thomas claimed not to know Hairston, which was nonsense, and when the truth was revealed the Tar Heel community began worrying about the NCAA coming down on Carolina for failure to monitor in addition to all the legal trouble. Amazingly, the story had a semi-happy ending for about two seconds. Hairston completed a drug assessment and showed proof of having an actual license, and all drug and gun charges were dropped in late July.

So how did he deal with this new lease on life? By driving his girlfriend’s car 93 mph in a 65 mph zone on I-85. And, of course, getting caught. Now Roy Williams has been forced to suspend him indefinitely, and the timing is particularly embarrassing for Carolina considering the massive black cloud of an academic scandal that has hovered over the school for the better part of three years and cost the football team a chance at an ACC title last year.

If Hairston stays clean for the rest of the offseason, I have full confidence that he’ll be in the starting lineup when UNC gets into the interesting part of its schedule in December. The question is, can he avoid another screw-up? Or is he destined to join Manziel in the pantheon of idiotic college athletes who can’t get out of their own way?

Translation: “Holy shit, are you serious? Brad Effing Stevens makes two championship games by playing the world’s most boring brand of basketball and getting super lucky, and now he gets to coach the greatest basketball franchise in the history of the sport? Do you motherf—ers know who I am? I am BILL SELF. I HAVE WON A NATIONAL TITLE. I HAVE BEEN TO THE ELITE EIGHT WITH THREE DIFFERENT SCHOOLS. I HAVE WON NINE STRAIGHT BIG 12 REGULAR-SEASON TITLES! Do you know how many conference titles Brad Stevens has won outside of something called the ‘Horizon League,’ which I’m pretty sure was made up of Butler and a few K-12 boarding schools for rich kids? ZERO! LIFE IS UNFAIR! [Begins weeping.] WHY CAN’T I BE PRETTY AND COACH THE CELTICS LIKE HIMMMM?!?”

For the Nerds: Something Happened With the Bracket Seeding Process

Now that some conferences are 16 teams deep, the selection committee won’t be so concerned about avoiding rematches early in the tournament. Previously, you couldn’t have a conference rematch until the Elite Eight. Now? Round of 32. The reasoning behind this is pretty obvious: With a chance for so many good teams to emerge from the same conference, you’d have to do a lot of juggling to avoid potential rematches, which would screw up a lot of seeds. With the rule change, seeds will be more accurate. The downside is that you might see teams meeting up on the opening weekend for the fourth time that season, but as someone who has been very critical of NCAA rules committees in the past, I have to admit they’re choosing the lesser of two evils here.

The Season Is Tipping Off in Asia Between Oregon and … Holy Shit, Georgetown?!

It’s happening. The Ducks and Hoyas will play the first game of the season on a U.S. Army base in South Korea on November 8. (On a related note, it looks like the 2012 weather fiascoes have ended the battleship game phenomenon, at least for now.) I mention this only because the last time Georgetown was in Asia around army regulars … it didn’t end so well. On the other hand, this presents Georgetown with the chance to be the first college basketball team to brawl with both the Chinese and U.S. armies. And let’s be honest, John Thompson III needs a legacy beyond his annual postseason disappointment.

Side note on Georgetown: Eamon Brennan’s piece on the school’s escalating mascot controversy is one of the high points from the offseason.)

And now the Ole Miss transfer has been indefinitely suspended by the team, P.J. Hairston–style, for failing too many drug tests. Which raises a question: How many drug tests do you need to fail before you get suspended? The word “multiple” in stories like this one is super vague. Based on his antics during the 2012-13 season, this should surprise no one. But man, those were some antics, weren’t they?

Every year, a few teams travel abroad in August to play exhibition games and get some valuable NCAA-sanctioned action before the official start of practice. Freshman-heavy teams in particular tend to opt for this loophole in the hope that their newbies won’t be so green when the games really matter. This year is no exception, and Andy Katz wrote about the 14 teams making trips to over and beyond the border this month. The highlight for me is Bo Ryan’s Wisconsin team barnstorming Ottawa and Montreal starting on the 20th. Dear Canada: As an American basketball fan, I apologize in advance for these tedious, yawn-inducing ambassadors, who will undoubtedly ruin the game for your nation forever.

Attendance Records Will Be Annihilated When Duke Visits Syracuse

Why? Because Cuse may move its court to the center of the Carrier Dome, a football stadium, to celebrate the biggest game of its inaugural season in the ACC. The court is usually situated near one end zone, and a divide in the middle effectively cuts off a number of seats. Even with that limitation, Syracuse still owns the on-campus attendance record — 35,012, from last February’s Cuse-Georgetown game. With the court in the middle for the Duke game, which has been proposed and considered but not yet confirmed, they could reasonably expect to draw more than 50,000 fans. We’ll know more when the official ACC schedule is released later this month, but now that the idea is out there, how can they possibly take it back?

And Last, the Story of the Offseason (Pitino Content)