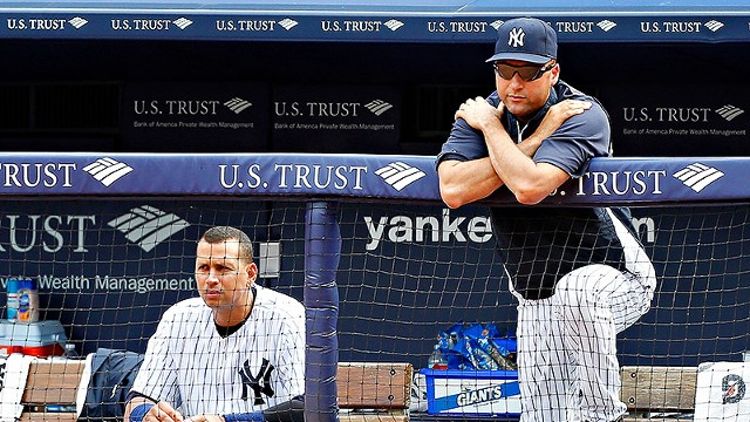 You never want to allow negativity to creep into your clubhouse, especially a clubhouse that was built with winning, upon a foundation of excellence. But at some point you just can’t ignore what’s going on any longer. The baseball season is long, but it isn’t an infinite amount of games, and you need to get a handle on things before they totally spiral out of control and you find yourself spending October wishing you’d done more in August to right the ship.

So you call a closed-door meeting. No media. Just the warriors who go into battle together every day, who bleed together and fight together and win together, gathered as one in a safe space where they can share their feelings. Things can get heavy in the closed-door meeting. But it’s a place where there are no judgments, not even if a guy breaks down sobbing because he knows he’s failing you personally by not performing at his absolute best every time out. What happens behind that closed door stays behind that closed door.

Because of that sacred confidentiality, you’re hesitant to even write about it in your diary, but it’s still important to record it for yourself. It’s what your journaling coach is always stressing, that you have to get it all into your “emotional archive,” so you can look back on it days or weeks or years later and maybe learn something.

Joe Girardi spoke. There were some slides on an iPad involved. But nobody was really in the mood for more graphs and bullet points; you got more than enough of that in the five spring training seminars. The time for that stuff is long past. The only bullet point remaining is:

Then it was Robbie Cano’s turn, but he mostly talked about some great song he heard on the radio, and then he hummed it for a while, but no one could recognize the tune. It might have actually been a jingle for a local tire store, that was one theory. He’s going to Shazam it next time and prove it’s a real song.

And then it was my turn. When you’re The Captain, you’re the one everyone’s waiting to hear, the one whose job it is to cut straight to the heart of it. You’ve got to provide the inspiration fuel for the engine of winning.

But I’ve always been more of a lead-by-example guy. So I led by the example of sitting there in silence for a long time, letting everyone have a quiet moment alone with their own thoughts about how we’d gotten to a place where we were having a closed-door meeting in Chicago, preparing to play a team that had lost 10 straight before we got to town.

And then I got up.

And I walked to the door and I said, “The playoffs start today.”

And then I walked through the door and out to the field.

The playoffs did not start yesterday.

The playoffs did not start today, either.

The playoffs will have to start Friday.

Sometimes you’ve got to pour a little extra inspiration fuel into the winning engine to get it going. It’s really more of an art than a science.

You never want to second-guess yourself, but maybe you should have saved the closed-door meeting for when you were back at home, in your own clubhouse, surrounded by reminders of your franchise’s unparalleled tradition of winning. If you’re on the road you lose the ability to do something poignant before you turn and walk out of the locker room, like giving a solemn fist-bump to the Yogi Berra statue made of leftover World Series rings. All you’ve got in that Chicago locker room is a vending machine that dispenses old cans of V8 juice with Ron Kittle’s face on them. Kicking it to see how many rancid Kittle cans fall out just doesn’t carry the same weight as dapping Yogi.

This is why you hate off days. Too much time to think.

A walk-off win to begin the homestand. You have to take that as a good sign.

Tonight was A-Rod’s first game back in front of the home crowd.

He comes over to my locker afterward, carrying a small trophy. The plaque on the base reads:

“You see my trophy, Jetes?”

“What a thoughtful thing for New York to do.”

“Do you want to hold it for a minute?”

“Maybe New York will give you one when you come off the DL again.”

“I wish you could have been out there with me, Jetes. It’s not the same without you.”

“Did you hear all the cheers?”

“I think I heard some cheers.”

“They were very special cheers, Jetes. Loud, long ones. I’m so lucky.”

“I’m going to show my trophy to Nuney now.”

“You should definitely do that.”

“Nuney’s going to love it, Jetes. I know he will.”

“Maybe I’ll get him one. I think I know where they make them.”

Alex walks back to his locker. He places his trophy on his chair, sits down in front of it, and closes his eyes.

Girardi gives Alex the day off.

He takes a spot in the middle of the bench and remains there the entire game.

Next to his trophy.

During the seventh-inning stretch, Alex finally gets up, brings the trophy out to the top of the dugout steps, and waves it to the crowd.

He closes his eyes and takes in the cheers.

I’ve called it a nightmare season, because at so many points that’s exactly how it’s felt. A season in which I was away from the team for most of the first half, a season in which I haven’t been able stay on the field even after I finally got back, a season in which we’re not where we need to be in the standings to make another run to the World Series.

And after Mo blows his third consecutive save, it feels like a nightmare none of us can wake up from. Homer to Miggy Cabrera, homer to Victor Martinez, tie ballgame.

Mariano Rivera’s never blown three in a row before. You don’t even know how to process it. Is it really happening, or is it just more of the same shared nightmare?

So I take out my brass Captain’s top, the one passed down to all Yankee Captains, and give it a spin on the dugout bench.

I watch the top.

Then Brett Gardner comes to the plate and hits a walk-off homer. The top begins to wobble.

But I only realize later I never saw it fall over. I was on the field, greeting Gardy at home plate.

Kuroda was amazing again. The way things have been going, you almost can’t believe how good he’s been since the All-Star break. The entire year, really, a year when so little else has gone our way.

I’m congratulating D-Rob on closing out the game when Alex comes over and presses something into my hand.

“I think you dropped this yesterday,” he whispers in my ear.

I open my hand.