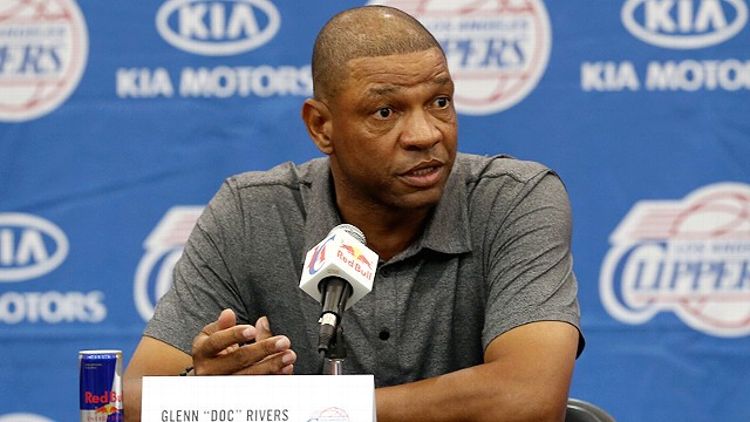 For some, it took yesterday’s scene in Playa Vista — Doc Rivers, seated in front of a Clippers background, just behind a branded placard bearing his name — to believe this was real. As the rumors of a Rivers trade began, and through the negotiation’s stops and starts, there seemed to be endless opportunities for the Clippers to be the Clippers, to bungle what could be a franchise-altering decision that might serve as one of the final steps from cursed organization to actual contender. But there he was, the highest-paid coach in the NBA, wedged between team president Andy Roeser and vice-president of basketball operations Gary Sacks. There was Doc Rivers, head coach of the Los Angeles Clippers.

You can count Doc among those nonbelievers. By Sunday, he’d resigned himself to a return to Boston. Conversations with Danny Ainge about the state of the Celtics’ roster had already begun, and when Rivers stepped into his son’s AAU game and turned off his phone, he wasn’t prepared for what awaited him when he powered it back on. There were a couple calls from Danny Ainge and more than a dozen from Rivers’s agent. “That’s how volatile this whole thing was and had been,” Rivers said. “I thought that this just took a long, winding path, but it found its way, so I’m happy.”

As Rivers entered the gym at the Clippers’ practice facility yesterday, he did so in a polo shirt, slacks, and what looked like a pair of casual sneakers. This had all happened so fast that Rivers left straight from his offseason home in Orlando, where his wardrobe is mostly shorts and T-shirts. There wasn’t a suit to be had.

The trio was introduced by Clippers play-by-play announcer Ralph Lawler, and Sacks wasted no time in outlining the magnitude of the day. “This is truly one of the biggest moments in Clippers history,” Sacks said. “We feel [Doc] is the best coach in the NBA and a perfect fit for our organization.” In the 30 or so minutes Rivers spent in front of a microphone yesterday, he was every bit the media-savvy presence he’d been in Boston. At one point, he asked that everyone refrain from using the “best coach” bit; he’d just watched the Finals like everyone else here. “I hope this is the last time I’m the center of attention,” Rivers said.

The focus, he said, should be on the players, and it’s those players, Rivers says, that attracted him to Los Angeles. Asked whether the pieces L.A. had or the pieces it did not were more glaring, Rivers did not hesitate. “The reason that I wanted this when it was made available was because of what they have and not what they don’t have,” he said. Rivers believes Blake Griffin and DeAndre Jordan have all the makings of one of the best defensive frontcourts in basketball, something that Rivers has enjoyed for each of his past five seasons in Boston (although Kevin Garnett helps), and that this is an organization not far from the ultimate goal. “Quite honestly, at this point in my life, that’s the only reason I’m coaching — to try to win titles,” Rivers said.

Talk of championships is still new for Los Angeles’s other NBA franchise, and small signs of how quickly everything has changed were still evident. Rivers noted that when he arrived to the Clippers as a player in 1991, the players had to make a call every morning to learn the location of practice. Yesterday, cars spilled out of the facility parking area, into a dirt lot, and even onto a path curling around a nearby hill. “I’m a little overwhelmed by the amount of people here today, and the amount of attention this has been getting,” Roeser said. “I guess when you pursue the best and the stakes are high, there’s a lot of interest.”

Those stakes aren’t set to lessen any time soon. The Clippers’ next priority is to retain Chris Paul, who’s set to be a free agent next week, but with Rivers in the fold, Paul’s return seems almost certain. Rivers said yesterday that he didn’t have a relationship with Paul prior to taking the job, but since the move, the two have been in touch. If (when) Paul does make his return official, those stakes will instantly transition to putting a team around him that warrants a $7 million–a–year coach.

Part of Rivers’s motivation in taking his new job is the expanded role that comes along with it. Rivers had some say in personnel decisions in Boston, but by his own admission, that was Ainge’s territory. Along with his role as head coach, Rivers was also named senior vice president of basketball operations, and he will work alongside Sacks in building a roster that Rivers feels fits what he’s trying to build. It’s fitting that such a process begins tonight, because now, the Clippers can waste no more time. In the next several weeks, it’s likely that Los Angeles will have both the franchise player and the coach it covets, and with them, the definition of acceptable results changes. Vinny Del Negro’s firing was the first indication that the Clippers want what the Lakers and Celtics have had — an annual expectation to compete for a championship. The choice to hire Rivers is the final indication. Maybe the Clippers were the Clippers after all, and maybe that now means something very different.

Who's That Draft Pick? The Big-Time Role Players!