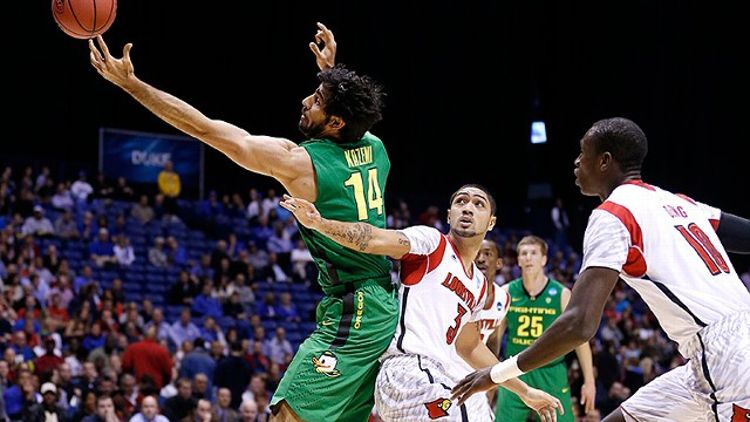 NBA teams are going to wish they had drafted Arsalan Kazemi. Now, since some of you might be muttering “Who?” right now, that might seem hard to believe, which means it’s probably a good time to introduce the player destined to make a number of organizations across the league feel pangs of regret by this time next year.

After receiving a hardship waiver to transfer from Rice University — where the Iranian-born forward was allegedly the target of racial abuse from the school’s athletic director — Kazemi moved from a school languishing at the bottom of Conference USA to Oregon for his final season of eligibility. When he became a Duck, the country finally got a glimpse of the 6-foot-7 rebounding machine who had been hidden away in Texas the previous three seasons. Kazemi went on to lead the country in defensive rebounding percentage (in a BCS conference, no less) while being a catalyst for an Oregon team that made its first Sweet 16 since 2007. Yet despite collecting 45 rebounds in three games on college basketball’s biggest stage, Kazemi still finds himself on the NBA fringes.

Two of the most reliable mock drafts — by ESPN.com and DraftExpress — don’t even have the forward slated as a late second-round pick (through DraftExpress wisely has him ranked as its 46th overall prospect). It’s odd to think that a league that has seen Reggie Evans and Kenneth Faried start for playoff teams has no need for a player who is a nightmare to keep off the glass, especially when rebounding has proven to typically be one of the most translatable skills from the college to professional levels.

Tim Miles, the head coach at Nebraska, witnessed firsthand what a destructive force Kazemi can be during an epic 17-rebound performance in a non-conference tilt at Eugene. Needless to say, the coach came away impressed.

“You have to keep an eye on him in so many facets in terms of the way he rebounds the ball,” says Miles. “It’s not just an athleticism thing, it’s more of an intuitive thing. He plays on mistakes. You lean left, he goes right and it’s over, he’s got the ball.”

As impressive as Kazemi’s ability to clean the glass is, it’s hard to peg exactly how much value it holds to NBA teams. Evans had to fight his way onto NBA rosters before working himself into Brooklyn’s starting lineup this past season. Faried, on the other hand, was the 22nd overall pick in the 2011 draft. Of the two, Kazemi has far more in common with Faried. While he isn’t on the same level as a collegiate scorer, Kazemi has the exact same wingspan as the Manimal, and the two produced virtually identical results in their pre-draft athletic testing. And like the blue-collar Faried, there is little to worry about when it comes to Kazemi’s attitude and effort.

Another interesting twist in this draft mystery is that unlike Evans and Faried, Kazemi won’t be a liability on defense. The Oregon forward was such a devastating pick-and-roll defender at the college level that he could single-handedly disrupt an opposing offense. “He’s one of those guys you game-plan around,” says Miles. Both Miles and Altman also pointed out how well Kazemi moves his feet — a huge plus for NBA teams hoping to use aggressive pick-and-roll defenses like the one Miami employs. Each coach also firmly believes Kazemi can routinely switch onto, and contain, smaller guards out of that same action when the situation calls for it.

There are reasons, though, why Kazemi remains on the periphery. He’s a middling offensive threat, lacks a reliable jumper, and is not nearly the elite finisher Faried is. He also turned 23 immediately following his senior season, bringing up concerns that part of his dominance was because of his age. Still, it’s hard to peg exactly why NBA teams appear unwilling to use at least a low second-round draft pick to bring Kazemi into the fold. What it may boil down to is one of the more common words you will hear on draft night: upside.

Quite a few players drafted in the late first or second round still offer a ceiling of a player that can one day start. Kazemi, on the other hand, doesn’t have the same rosey outlook. He’s a one-position player (power forward) without the size or bulk to probably ever be a full-time starter on a good team. Even if he develops a reliable jumper, Kazemi is likely still only a 20-minute-a-night backup. And should his contributions on offense always be minimal, Kazemi will be relegated to the fate of energy guy who thrives in small stretches while grabbing rebounds and playing pick-and-roll defense. It’s not the eye-popping choice, but drafting a player virtually guaranteed to excel in that role would offer a much better return than most teams typically receive from those spots in the draft.

But as the names are rattled off tonight, there’s a good chance Kazemi doesn’t hear his, and, like Evans, will have to play his way onto an NBA roster to get his start. The others drafted in front of him, most of whom are destined to be forgotten, will charm teams with their potential while a ready-made role player goes unnoticed.