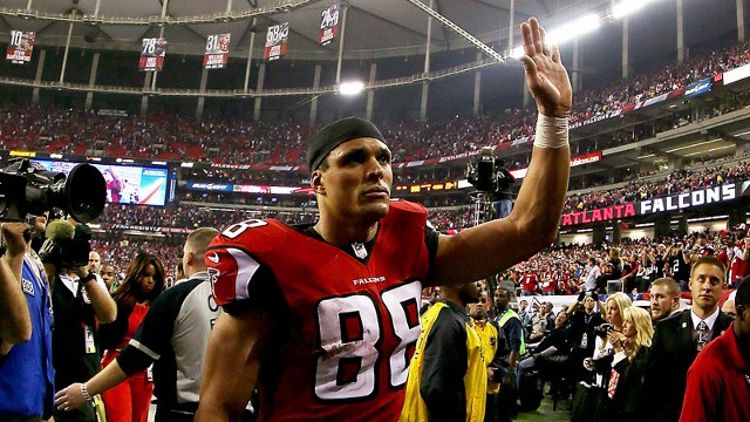 When the Atlanta Falcons’ season ended in last year’s NFC Championship Game, one worry for the organization and for fans was that Tony Gonzalez’s career had ended along with it. The now-37-year-old tight end had hinted that 2012 would be his final season, and the feeling after Atlanta’s soul-crushing loss to the 49ers was that Gonzalez was walking off the field for the final time. Well, lucky for us, he wasn’t.

Gonzalez will play his 17th, and likely final, NFL season this fall, and as he does, football fans will get the rare chance to watch the best who’s ever done it go out as more than a shadow of his former self. There’s really no sense is detailing why Gonzalez is the greatest receiving tight end in NFL history because it’s so unassailably true. Gonzalez’s 1,242 receptions are second all time — to Jerry Rice. His 14,268 receiving yards are good for the seventh-best total ever. Shannon Sharpe is the next tight end on the list; he’s 39th. Gonzalez has had at least 60 catches in every season since 1998; that year, he had 59. Quite simply, no one has ever played tight end like Tony Gonzalez, and last year wasn’t much different.

At age 36, Gonzalez caught 93 passes — tied for the fourth-best mark of his career. His 930 yards was the fifth-highest total of his career. His eight touchdown catches brought his career total to 103; only Jerry Rice, Randy Moss, Terrell Owens, Cris Carter, and Marvin Harrison have more. (Did we mention that Tony Gonzalez is the best tight end ever?) That performance, and the Falcons’ clearly upward trajectory and loaded offense, was enough to coax Gonzalez back for another season — with one caveat. Gonzalez won’t be at Falcons training camp, which is usually one of the major deterrents for older players coming back. Count me among those who feel like Tony’s earned it. And if it means one more go around, I’m not sure anyone stands to complain.