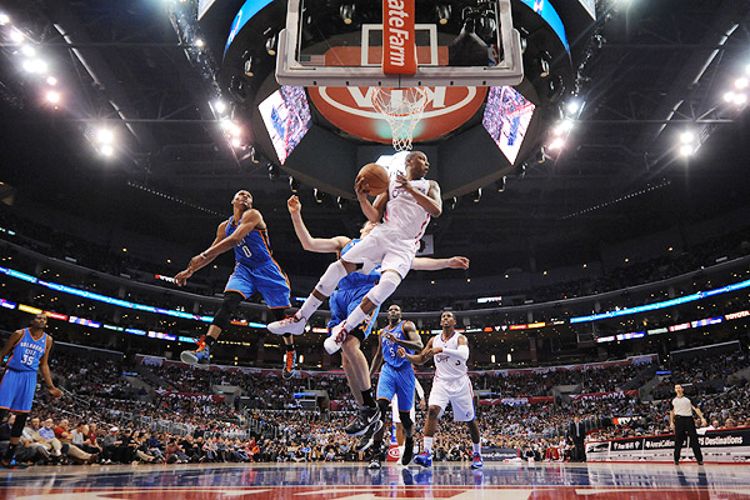 First, bowing to the tyranny of the news cycle, we’re going to discuss The Dunk. The challenge here is figuring out how to describe something in a compelling way that everyone has seen 50 times, screamed over, and tweeted about.

As a novelty, let’s take it in reverse. Three minutes after the incident, the Staples Center crowd was still buzzing as Blake Griffin, waiting to rebound a Kendrick Perkins foul shot, admired his own atrocity against humanity on the screen overhead. Two minutes after the crime, cameras unflinchingly bore down on Perkins, the victim, as he stared impassively into nothingness like a man whose soul had been yanked from his chest. And in the seconds immediately following the egregious violation of personal space, DeAndre Jordan clamped his teammate in a celebratory hug that looked more like the kind of embrace one would use to break up a fight. Such was the violence.

Before all that, there was the dunk. With nine minutes remaining in the third quarter of Monday night’s game between the Oklahoma City Thunder and the Los Angeles Clippers, Chris Paul, an ingenious architect of destruction, came off a pick and was welcomed with the spatial freedom where he is at his most malevolent. With his defender trailing the play, Paul cajoled shot-blocker Serge Ibaka into entering into the void and slid a deft pass to a cutting Griffin. Perkins, a burly, scowling, owl-faced enforcer, got in the way. Griffin elevated, absorbed contact, smushed Perkins’ mug with his hand, elevated further and flung ball into the hoop with a parabolic swoop. On the way to an impressive 112-100 victory, the play gave the Clippers a 21-point lead and served as a punctuation mark that will live in YouTube-able infamy.

Filled with dunks, wild scrambles for loose balls and a precipitation of 3-pointers, Monday night’s game between two of basketball’s best young teams was an exuberant affair. Traditional powerhouses such as the Lakers, Spurs, and Mavericks now quiver with vulnerability, and the Thunder and Clippers seem locked into paths that will intersect in the Western Conference playoffs this spring. They’ll get there differently.

Oklahoma City’s rise to NBA elite has unfolded exactly as expected. Two seasons ago, when we watched the precocious bunch give the Lakers speed rashes during a six-game playoff series — which was a Pau Gasol putback away from a seventh game — the Thunder were a knotty bulb of undifferentiated tissue. In our minds, Kevin Durant was 15 years old, Russell Westbrook was a coiled spring masquerading as a point guard, Ibaka was regularly mistaking butternut squashes for basketballs — and their potential was the kind of thing that clogged up the horizon with sparkles and winged unicorns.

Now they have blandly fulfilled that promise. They have not crumbled into oblivion from ACL injuries or succumbed to internal tumult. Durant and Westbrook simply evolved into humdrum superstars, predictable in nightly excellence. Despite scoring more than 30 points seven times this season, Durant generated more attention for his lockout performance at Rucker Park. When he and Westbrook combine for 55 points in a victory over a playoff team, we yawn.

The Clippers, on the other hand, have seized the mantle of gorgeous, unchained potential. When NBA commissioner David Stern squeezed Paul down the sluiceway to Los Angeles, the idea of the league’s best point guard playing with Griffin and Jordan was compelling. Then Caron Butler, Mo Williams, Chauncey Billups, and capable bodies like Randy Foye and Reggie Evans were plugged into the equation, and the Clippers started looking like a contender, at least on paper. Well, they are.

In January, the Clippers beat the Trail Blazers, Heat, Lakers, Mavericks, Grizzlies, and Nuggets. Other than the Chicago Bulls, that list of the defeated includes virtually every elite team expected to compete for the championship. Lob City wasn’t built in a day, but the real estate you purchased for pennies during the Clippers’ miserable start to last season is suddenly worth a fortune. We’re about a month away from seeing a waterfront spiked with high-rises and the wholesale gentrification of Kamanville, an abandoned industrial graveyard now pockmarked by teahouses brewing taro and boutiques peddling sweaters for cats.

For youthful, athletic teams that are excellent on offense and mediocre on defense, the Thunder and Clippers are very different when it comes to how they disembowel opponents.

Oklahoma City emphasizes individualism. Durant and Westbrook do not work together; they take turns. Last night, Durant scored 36 points on 23 shots and notched one assist. Westbrook scored 31 points on 26 shots and contributed four assists. A few days ago, Perkins defended Westbrook’s shot selection by claiming the Bulls’ Derrick Rose absorbs far less criticism despite popping off the same conveyer belt of score-first point guards. But Westbrook is no Derrick Rose. The Thunder’s ostensible floor general accumulates assists accidentally — they are a happy side effect of giving the ball to Durant once in a while. Westbrook had several spectacular dunks and writhing layups Monday night, but he also turned the ball over six times.

The matchup between Westbrook and Paul was a fascinating study in competing point guard orthodoxies. In his short stint with the team, Paul’s contagious selflessness has already infected the entire Clippers roster. On one play during Monday’s game, three Clippers passed up open perimeter jumpers as they whisked the ball over to Butler, who was spotted up along the right baseline. He buried it. If anyone on the Clippers does something foolish, it sticks out. When Butler dicked around and chucked up an errant 3-ball instead of allowing Paul to orchestrate the final ticks of the third quarter, it felt like a betrayal of both hierarchy and doctrine. How can someone behave selfishly when he has to answer to a teammate who is a superior player, an indomitable competitor, and a surreptitious scrotum-puncher who never takes a bad shot?

In Oklahoma City, squandering possessions is culturally acceptable. Sure, Serge, toss up another wild 18-footer. Because which Thunder leader can wag his index finger about poor shot selection? Gordon Gekko couldn’t lecture anyone about restraint until he learned his lessons the hard way. But in defense of their greedy habits, the Thunder don’t exactly have a flowing cornucopia of scoring options. Monday night, the Clippers got 22 points from Butler, 12 from Williams, 13 from Billups, and 11 from Jordan. Oklahoma City had one player score in double digits besides their two superstars, and it was a mouse-quiet 12 from designated shooter Daequan Cook, who drained a few meaningless 3s.

As decisive as the Clippers’ win was, Monday night’s outcome might have been different if James Harden had played reasonably well. The game was the first start for Harden, a third-year player whose futuristic mohawk and bushy beard camouflage an old-man shiftiness and a Buster Keaton-like knack for pratfalls. Despite Harden’s previous role as a sixth man, advocates of nontraditional metrics could argue that he’s been the best player on the Thunder this season. He leads his team in win shares per 48 minutes, and is second in the league in that category behind only LeBron James. Harden is also second in the league in offensive rating.

Harden did the stat-nerd community no favors in his debut as a starter. He shot poorly from the field, was sloppy with the rock, and went thrashing into crowds of defenders with the recklessness of a rickshaw driver with a death wish. On five consecutive second-quarter possessions, he dragged the entire game into swirling chaos by drawing three fouls, causing a rugby scrum after being stripped of the ball, and being called for a charge. If you’ve played enough pickup basketball, you instantly recognize this individual. He is the most annoying person in the world. Harden’s unattractive box-score — seven points on 2-of-10 shooting, three turnovers, four rebounds, five assists — looks much less ugly than it did under the glare of the lights.

On the winning side, Paul’s line was indicative of how thoroughly he dominated the game: 26 points, 14 assists, two steals, and only two turnovers. With less than two minutes to play and victory all but secured, he strung together three consecutive baskets with such comical ease that it made his typical magnanimity seem like an personal exercise in self-restraint. But Paul knows what he’s doing. While Monday’s game will be remembered for one fantastic individual highlight, the Clippers trounced one of the NBA’s best teams for precisely opposite reasons.