The Borini Conspiracy: The Loaned-Out Striker, the Penalty Shot, and Liverpool’s 10-Year Plot to Win the Premier League 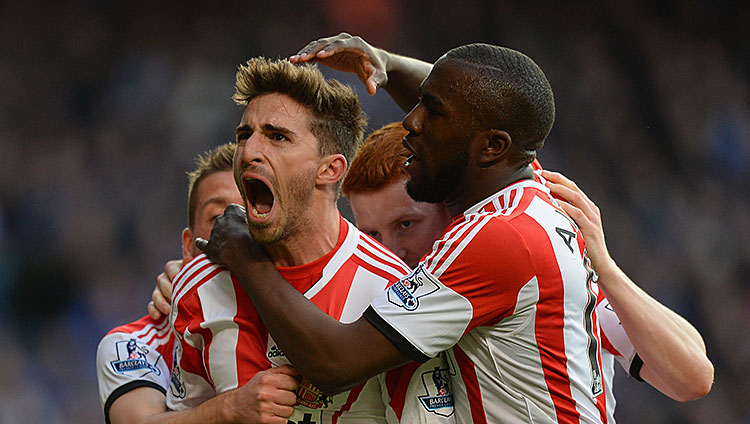 On Saturday, the first player Brendan Rodgers signed as Liverpool manager scored the winning goal at Stamford Bridge, knocking Chelsea three points back as Steven Gerrard & Co. extended their winning streak to 11 games and their lead atop the English Premier League table to an eerily comfortable five points. Except, Liverpool and Chelsea? They don’t play until April 27.

Let’s go back to 2004. Rodgers becomes Chelsea’s head youth coach. He’s hired by, yes, Jose Mourinho. The easiest way to hide a conspiracy from a would-be watchdog? Use him as a pawn. Why did Rodgers get the new gig? It was suggested to Mourinho by Steve Clarke, who later served as Kenny Dalglish’s assistant at, you guessed it, Liverpool F.C.

In 2006, Rodgers is promoted to reserve-team coach. A year after that, one 16-year-old Fabio Borini joins Chelsea’s reserves under Rodgers. Coincidental? The only coincidence is that the “There Are No Coincidences, Bro” T-shirt I own is also long enough to be worn without pants. In 2008, Rodgers leaves Chelsea to manage Watford for one season, and then Reading for another. Both clubs were in the Championship, neither a success — but Rodgers had to slow his ascent. Borini still wasn’t old enough to buy cigarettes in New Jersey.

Come 2010, Rodgers takes a job with Swansea. Halfway through the season, who joins Swansea on loan? Borini. Who scores six goals in nine games? Borini. Who helps Swansea get promoted to the Premier League? Borini. After that half-season, Borini leaves Swansea. But rather than going back to Chelsea, he moves to Roma. The best place to hide an Italian? In Italy. Then, after one EPL season with Swansea, Rodgers becomes Liverpool manager. Who does he replace? Among others, Clarke. Who’s an outspoken supporter of the move? Mourinho. Who’s his first signing? Fabio Borini. Some hailed him as the Bolognese Pedro of the new Scouse Barcelona, but a “shoulder injury” derailed his first season. I’m not saying it was a fake injury in order to make a loan move to Sunderland by an Italian international seem reasonable, but I’m also not not saying that you play soccer with your feet, not your shoulders.

On April 19, 2014 — c’mon, a day before Easter — Borini converts a penalty in the 82nd minute to give bottom-of-the-table Sunderland a 2-1 victory over Chelsea, Mourinho’s first loss in 78 home league games as manager of Chelsea. The way to make the near-culmination of a methodical, flawless, decadelong plan seem anything but: Shroud it in “improbable” history.

Some have said Liverpool are a team of destiny; others might say that destiny is just an opiate to numb us from the cruelly efficient, unspectacular, behind-the-scenes machinations of a handful of omni-powerful men and women who shape the world to their liking.

Last month, Rodgers was asked about Borini’s loan to Sunderland. His response: “Hopefully, in the future, Liverpool will benefit from it.”