The 15 People You Meet in a Golf Gallery 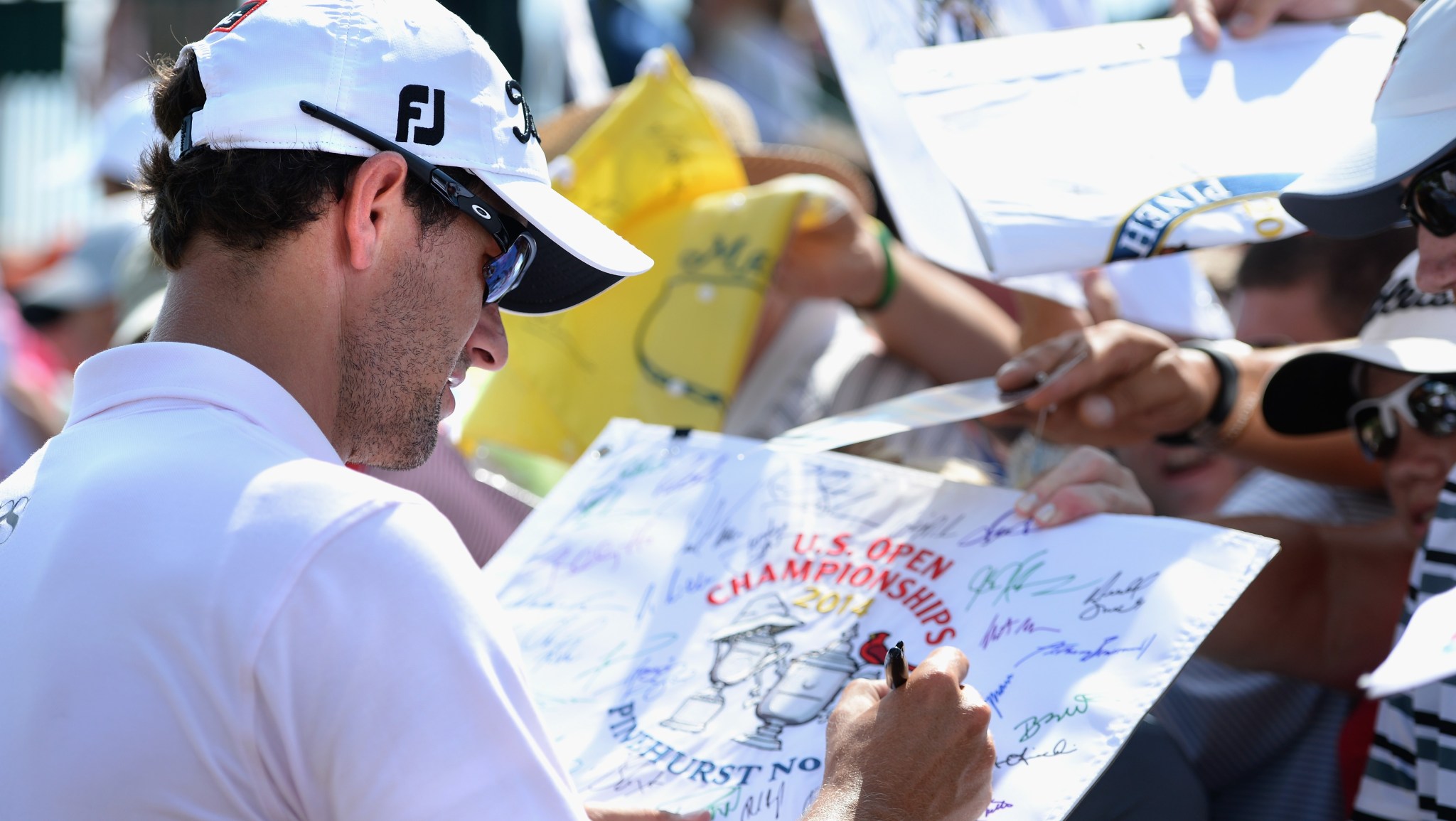 Before the 2014 PGA Tour season, I’d covered exactly five golf tournaments in my life. It was still a nice novelty, and I had the luxury of focusing solely on the players. This year, I’ve been to 17 tournaments, and when you’re constantly wandering from hole to hole hoping for something dramatic to happen, the mind tends to wander. At some point, I found myself focusing on the gallery.

Let me be the first to tell you: Golf fans are weird. They’re by turns boring, crazed, needy, angry, pathetic, and excessively polite. (When I told a fellow journalist I’d be writing about the different types of golf fans, his immediate reaction was, “They’re all wankers.” I don’t endorse this view … not fully.) So, here are the 15 kinds of people you meet in a golf gallery. I’m leaving off kids, since they have license to behave in ways that are far sadder (and therefore funnier) when observed in adults.

Just typing those words made me angry. Howard Stern saddled his producer Gary Dell’Abate with the nickname “Baba Booey” in 1990 because of some confusion about a cartoon called Quick Draw McGraw, stemming from his hobby of — look, it doesn’t matter. They gave him the nickname for some reason, and Stern’s fans seized on “Baba Booey” as a rally cry for all manner of high jinks, but mostly prank phone calls. Somehow it made its way into golf as the hilarious thing you yell after a tee shot, and it may have been kinda funny in 1990 for a while. In the ensuing 24 years, however, it has become the sport’s vuvuzela, shouted incessantly week after week until you want to blindly attack the entire gallery in the hopes of getting lucky and wounding the culprit. The really heartbreaking thing about the “Baba Booey!” cry, though, is that someone always laughs, adding a bit of positive reinforcement to ensure our nightmare will continue. (See also: “MASHED POTATOES!” and “YOU DA MAN!”)

I was in Memphis last week for the St. Jude Classic, and there was a guy who followed Davis Love III around from hole to hole saying, “Thanks for coming to Memphis, Davis!” in the most obsequious way possible. Love responded graciously, since he’s legitimately one of the nicest golfers around, but my god, I hated that kiss-ass. I wanted to grab him and yell, “You know he’s making money for this, right? You know he’s super rich and will become richer after this weekend?” It wouldn’t matter, because the kiss-ass was all about his own gratification. For him, that slight nod from Love was all the confirmation he needed that he was a special fan among the ungrateful rubes. I hope he fell in a pond.

It’s really, really depressing how often this happens. And how they wait against the ropes, having pushed children aside, a sad, hopeful smile on their faces as Rickie walks by. As though he’s going to stop, turn in surprise, begin laughing hysterically at the clever idea, and invite them to hang out for the rest of the round. It’s always so satisfying when he ignores them completely.

This guy usually turns up at the green when a player is about to hit out of a bunker. The second the ball comes out of the sand, “Great Shot!” guy shouts, “Ohhh, great shot!” He has no idea where the ball is going. It could stay in the fringe, roll over the green into the water, or cause a bird to explode in mid-flight. Doesn’t matter. To him, the shot was stellar the moment blade struck ball.

A cousin of “Ohhh, Great Shot!” guy. This is the person who seems like he or she has $10,000 invested in a shot, because they can’t stop screaming encouragement at the ball, regardless of who hit it. “BREAK! OH, COME ON, BREAK, BALL! OH GOD, JUST BREAK! NOOOO!” The instinct is to tap them gently on the shoulder and say, “Hey, you see that golfer out there? Just to be totally clear … you know he’s not you, right?”

Every week, the PGA Tour employs hundreds of volunteers to make their tournaments run smoothly, and most of them are decent people. There are always some who become inflated with their tiny little bread crumb of power and immediately become assholes. These people usually find themselves on cell phone patrol, where all they have to do is tell people to put their phones away if they try to take pictures. Needless to say, they think they’ve been deputized as presidential bodyguards. So they strut along the ropes, scanning the crowd, just waiting to pounce on any threat. Instead of issuing warnings, they try to intimidate fans and confiscate the phones. In Dallas at the Byron Nelson, I watched a college-age kid laugh at one of the Nazis when he demanded the phone, and the guy tried to sic a cop on him! Luckily, the cop laughed at him too. I never saw what became of that man, but I like to dream he too ended up in a pond.

7. The Attention Seeker Without a Plan

Scene: Jordan Spieth is walking down a fairway.

Attention Seeker is stunned into silence. He recovers just as Spieth turns away.

Attention Seeker, to friends: Did you guys see that?!

Depending on the weather, dressed in either all white or all black. Sunglasses. Seem vaguely unhappy, and probably counting the days until the relationship is secure enough that they will never, ever have to walk 18 holes on a golf course again. (Notice I didn’t include wives in the description; wives make an appearance at the 18th green if, and only if, their husband is about to win the tournament.)

It’s fashionable to make fun of adults who go after autographs, and I usually approve of that wholeheartedly, but the more I observe the guys who shoulder through the crowds to get every player’s autograph on a flag or a poster, the more I notice that they tend to give off a different vibe. In other words, I don’t think these are evil vultures who sell the autographs on eBay; I think they collect the autographs for their own private collections, and then go home and speak for hours to their pet turtle. Who died six years ago.

I really have to admire the heckler, for two reasons. First, golfers have seriously fragile psyches. Second, the culture of golf is seriously anti-heckler. You can’t even snap a furtive cell-phone picture; if you actually say something negative, the entire golf industrial complex turns on you with the fury of centuries of entitlement. This is the sport of the rich, and rich people believe a golf course is sacred ground trodden upon by athletic — and corporate — idols. Violate that sanctity, and you’re basically the devil.

I only saw this fan once, at the Cadillac Championship played at Trump National Doral, but my god it was horrifying.

One of the unique elements about golf is that most of the fans in the gallery actually play the sport. It should come as no surprise, then, that some of them think they’re smarter than the professionals. Any time you hear a fan starting a sentence with “What I would have done there,” politely inform him that he has never broken 100 and literally isn’t qualified to carry a pro’s clubs, then proceed to push him into the nearest pond.

It’s 12:45 p.m., the leaders aren’t teeing off for another hour, and this dude is stumbling around with his belt undone in the trees outside the port-a-pottys, mumbling, “PHIIIILLLLLLL.” Bonus points if it’s hot as hell and he’s not wearing sunscreen.

Mansplaining is at its all-time worst at a golf course, because you’ve got a couple of combustible elements meeting in a powder-keg situation. First, a lot of guys think it’s a good idea to take their non-golf-fan girlfriends to a golf tournament. Second, the explaining is probably necessary to some degree. Third, and importantly, the girlfriend could not give less of a shit. Fourth, the dude is totally oblivious to fact no. 3, which should go without saying. These circumstances combine to produce lengthy mansplained monologues about the mechanics of Jim Furyk’s swing, and soon everyone wants to die.

“Well, I always root for Stewart Cink because I actually know him pretty well. When I was a kid, I’d always go to my cousin’s for the summer because they lived on a lake, and Stewart’s brother Norman would always come by in the afternoon to fish off the raft. He never said much, just kind of laughed to himself and drank lemon juice straight from the bottle, and later we found out he wasn’t Stewart Cink’s brother at all, just a 45-year-old ex-convict with rickets, but ever since then I’ve been a huge fan.”

This is a photo of Adam Scott making a huge birdie putt on the second playoff hole against Jason Dufner at the Colonial in Fort Worth. Now let your eyes drift down to the lower-left corner of the photograph, and notice the weirdo with glasses, notebook, and sweaty hair staring at Scott the way a religious zealot would stare at a prophet if he descended to Earth on the wings of a giant eagle.

Hey guys, that’s me! No need to push … I’ll see myself into the pond.

We Went There: The Spurs' Pressure Cooker