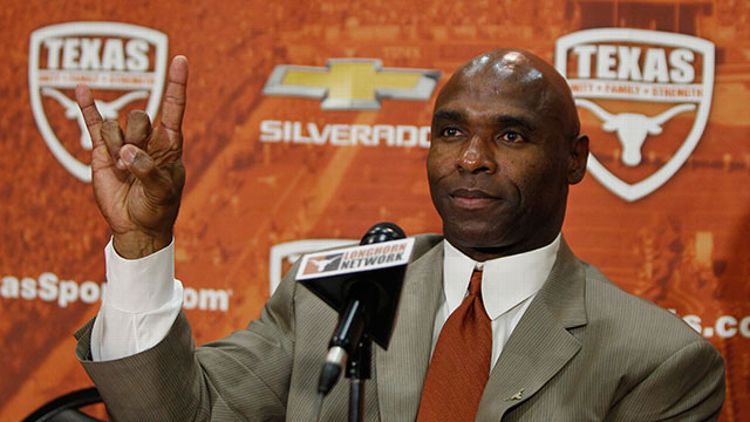 It feels great, doesn’t it? I mean the fact that the University of Texas introduced its new coach, Charlie Strong, at a press conference yesterday.

If college football is our most irrational sport, then the coach’s introductory press conference is its most irrational event not called the Beef ‘O’ Brady’s Bowl. At noon Eastern Time, Strong appeared in a gray suit and burnt-orange tie in front of a backdrop studded with Chevy Silverado ads. Chevy had a warbling ad campaign called “Silverado Strong.” I’m pretty sure any resemblance was accidental.

What’d Strong say? A coach’s job at an introductory press conference is to emit a word cloud of cliché that stirs inchoate but genuine excitement in alums like me. Accountability. Responsibility. Trust. Ethics. Tradition. History. Humility. Excellence. Up-tempo. On the field. Off the field. Earl. Ricky. Hook ‘em.

Mission accomplished. But this presser arrived with a subtext. As soon as Strong’s name began circulating on Texas message boards Friday night, fans suggested he couldn’t handle the media demands of the Texas job. He had neither Mack Brown’s press-neediness nor oozing charm. “The fit is so bad in that area,” Yahoo’s Pat Forde wrote, “that you have to wonder whether Texas did enough homework upon making this hire.”

“I was hoping I brought this cold weather with me and it would block out a lot of this media,” Strong said at the press conference. The reporters laughed.

The thing was, by the time the press conference began, Texas reporters had crafted a Strong counternarrative. So he wasn’t Mack. But Charlie was tough. He was strong. “Strong works out every day and still benches well over 300 pounds,” wrote Orangebloods.com‘s Chip Brown. “Slap him on the back, and you might break your hand.”

“I, for one, welcome the tough-as-nails regime of Charlie Strong to Austin,” Brown wrote in another post. That echo of Kent Brockman was also perhaps accidental.

This triangulation had the effect of making Strong’s job Monday even easier. It managed expectations — if he merely answered reporters’ questions and did 35 reps on the bench, we would love the guy from go.

And we did. Strong was good. He name-checked Brown and Darrell Royal. He pledged to “seal the borders” when it came to recruiting and “cherry-pick” the best players from out of state. (Students of the introductory press conference will know these as old standbys; it would be news if the coach said he was going to let all the good players go to LSU.) On these occasions, it’s the job of the new coach to say the condition of the program is good, but that he can make it better. “The bricks are there,” Strong said. “I just need to put another brick on top of it.”

Strong is against paying players, with reservations, and in favor of playing A&M, with reservations. There were hints of an impish wit. Strong noted that when he was at Louisville, a mere scholarship offer would cause the recruiting services to change a recruit’s score from three stars to four. But when Teddy Bridgewater decided to go to Louisville instead of to Miami, his score fell from five stars to four.

Other than that, the sportswriters’ questions amounted to housekeeping: When are you hiring assistants? Should we call you Charlie or Coach Strong? Why do you wear Dri-FIT turtlenecks?

(Our new hashtag seems to be #stronghorns. Which is fine. But #charliehorns has a nice, kicked-in-the-quadriceps ring to it. It’s tough. To be discussed.)

It only briefly remarked upon Charlie Strong being the first black head football coach in the history of the University of Texas. They did bring it up once, which I suppose is sufficient. This occasion was noted over the weekend by a bunch of morons who got banned from message boards and a Fort Worth columnist who cracked, “It’s as if the Longhorn Network fired Leno and hired Arsenio.” (I, for one, welcome fewer racially dubious, well-past-their-sell-date references to late-night TV.)

This isn’t an insignificant fact. The Texas football program dragged its heels on integration and fielded the last all-white national championship team. It managed, through fear and incompetence, to put Barry Switzer on the right side of history.

A coach’s introductory press conference doesn’t really accommodate that kind of talk. The Texas administration doesn’t want to dwell on it (Texas president Bill Powers made a glancing reference to history), and Strong intuited, correctly, that he’ll be judged only on how many games he wins. “I don’t ever want to look at it as it’s a ‘first,’” Strong said. But it is a first, and an important first, and being happy about that isn’t the least bit irrational.