The Sportstorialist: Ruffling Feathers at the U.S. Open 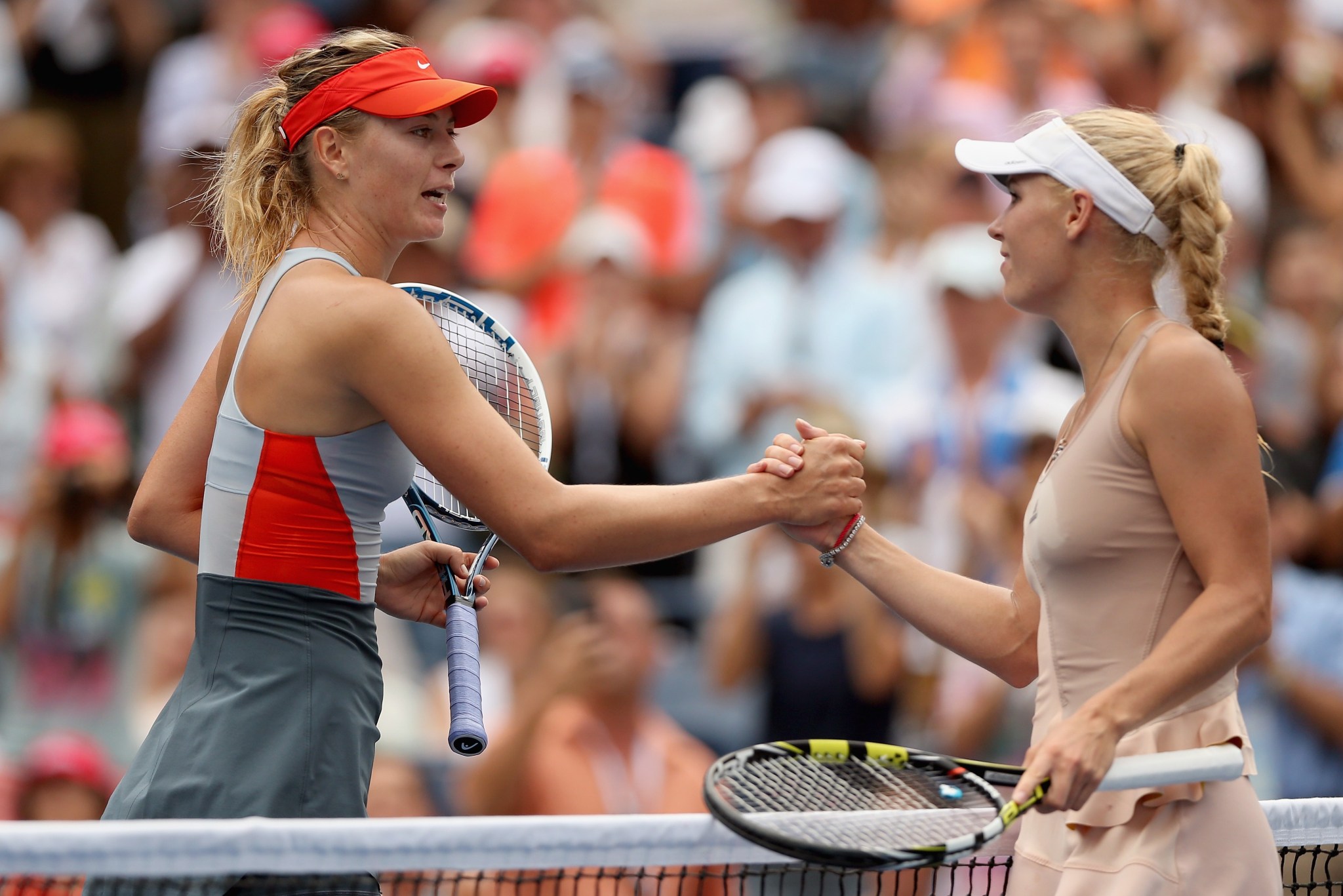 Outside one of the women’s boutiques in my neighborhood sits a sandwich-board sign. Usually, it offers an invitation, in bright chalk, to come inside because, say, the spring arrivals are here or it’s cold out there. But one day, the sign just got down to business: “We have cute shit.” I passed it daily and spent a lot of time laughing about the boundary the store felt it had to cross. Whatever was comically boastful about it was also openly confrontational, like “kiss my sass.” That’s how I feel whenever I watch Caroline Wozniacki play tennis: She thinks she has cute shit, too.

For the 2014 U.S. Open, she’s chosen to play some of her matches in a flesh-toned dress with an arcing slash across the front. On her left, at her hip, near the slash, there’s a loose ruffle. It just kind of hangs there. Depending on how damp the dress gets, that flesh tone can turn indecisive. Is it carnation, peach, or steamed salmon? (A second version is Valentine’s Day pink-and-red.) As a garment, it’s frilly. It’s “girly.” It’s 1981 Oscars. But Wozniacki has been turning the worst outfit at the tournament into a stunning spectacle of cognitive dissonance. On Sunday, it happened again, as she kept finding ways to flummox Maria Sharapova, while also looking like she was about to present the award for Best Sound. 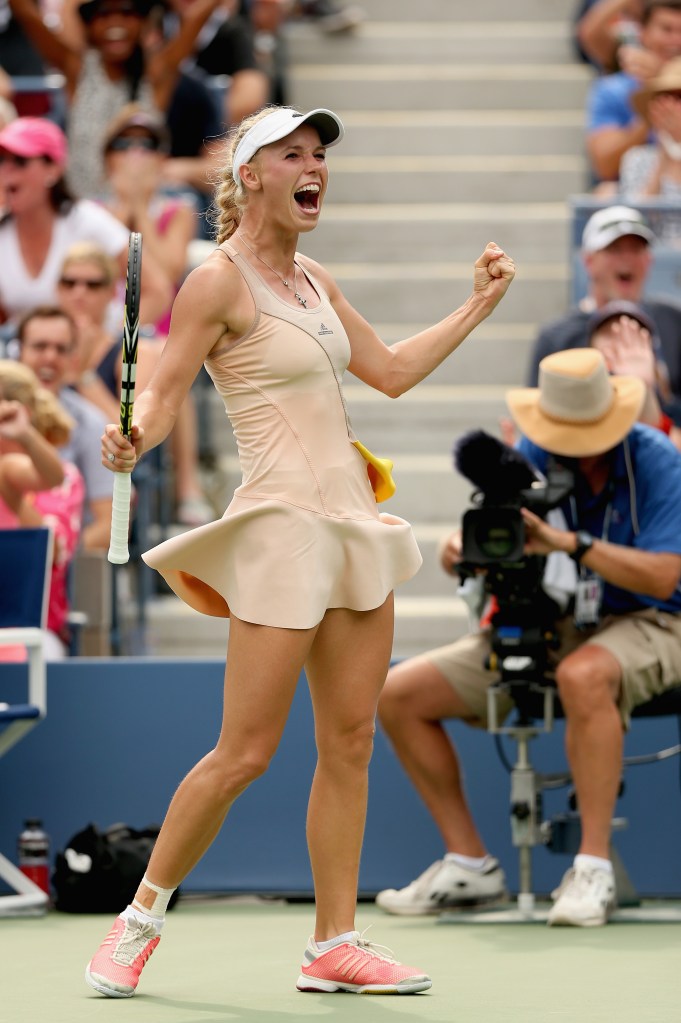 They blasted the ball at each other while splitting the first two sets. But Wozniacki managed to keep Sharapova lunging until the latter looked like a woman racing for a departing bus on a Möbius strip. It’s not as if you look at Wozniacki in that outfit and aren’t impressed by her power; it’s that you can’t believe she’d choose to be powerful in that dress. Four Wimbledons ago, Wozniacki played in a white dress with flowers around the neck. It was the most prestigious tennis tournament in the world, but during Wozniacki’s four rounds, it was also the Don Ho Open.

Wozniacki’s U.S. Open dress is the sort of thing I always assume Sharapova wants to wear: something absurdly fashionable by a top designer (it’s Stella McCartney for Adidas). That she doesn’t wear anything like that gets at what’s wrong when Wozniacki does. There’s almost nothing cute in women’s tennis anymore. It’s been banished. Sharapova believes in glamour. Sometimes her sportswear is chic, but above all, it’s practical, simple, and forgettable. On Sunday, she grew frustrated with the humid, swirling conditions — and presumably with Wozniacki’s cleverness and intelligence, and herself. Attire should have been the furthest thing from her mind. But I imagine it’s hard to see Wozniacki sitting around the players’ lounge in that dress and not wonder, just a bit, whether she knows she’s not about to go out and skate a free program. 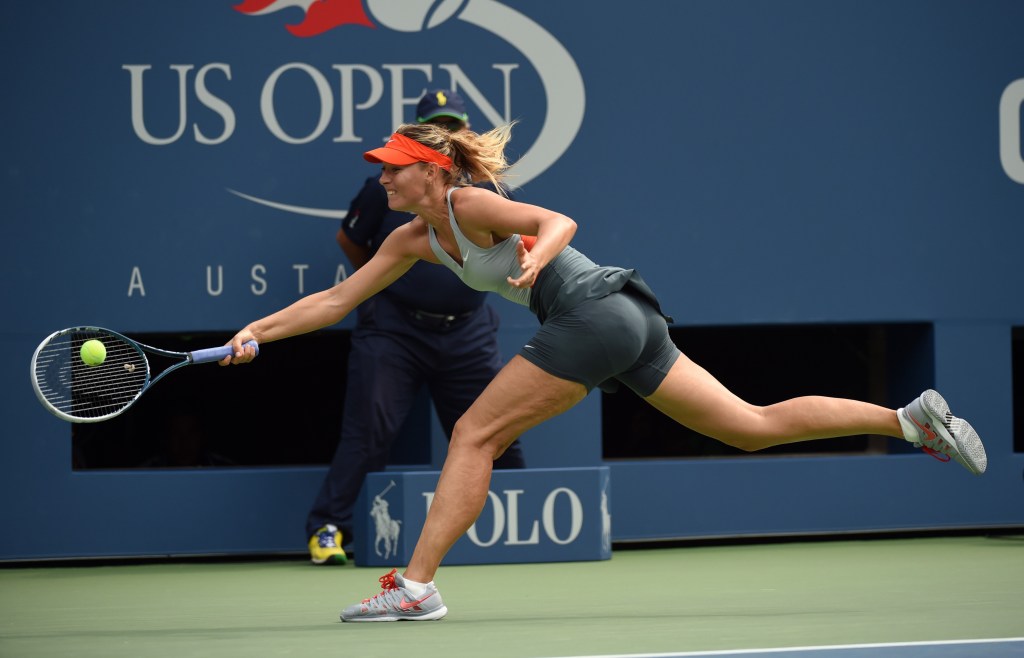 Sharapova wore hard solid colors Sunday, red trapezoidal blocks down her flank. Her dark gray skirt sat up on her waist. From the back, the whole thing looked like a bathing suit with the skirt as a cover-up. Too much time has been devoted to Sharapova’s hotness. Maybe she’s hot. But to watch her play is to witness the difference between beauty and vanity. You might be aware of how she looks, but that’s your problem. You never detect her awareness. Contrast that with the NFL, where some of the least beautiful men also happen to be the vainest. Sharapova might actually be one of the most serious-looking people I’ve ever seen do anything.

Before she serves, when she’s down or under pressure, she takes a long look across the net — at everything, at nothing. It’s not a death stare the way it can be with Serena Williams. It’s almost existential. In that fourth-round match against Wozniacki on Sunday, what you noticed was the weight of Sharapova’s desire to win and how much heavier it felt than Wozniacki’s. Desire calcifies into gritty despair with Maria. Maybe it’s hard to feel too serious in such an unserious piece of clothing. Maybe Caroline’s ruffle is doing for her game what Milos Raonic’s Trapper Keeper compression sleeve had been doing for his. 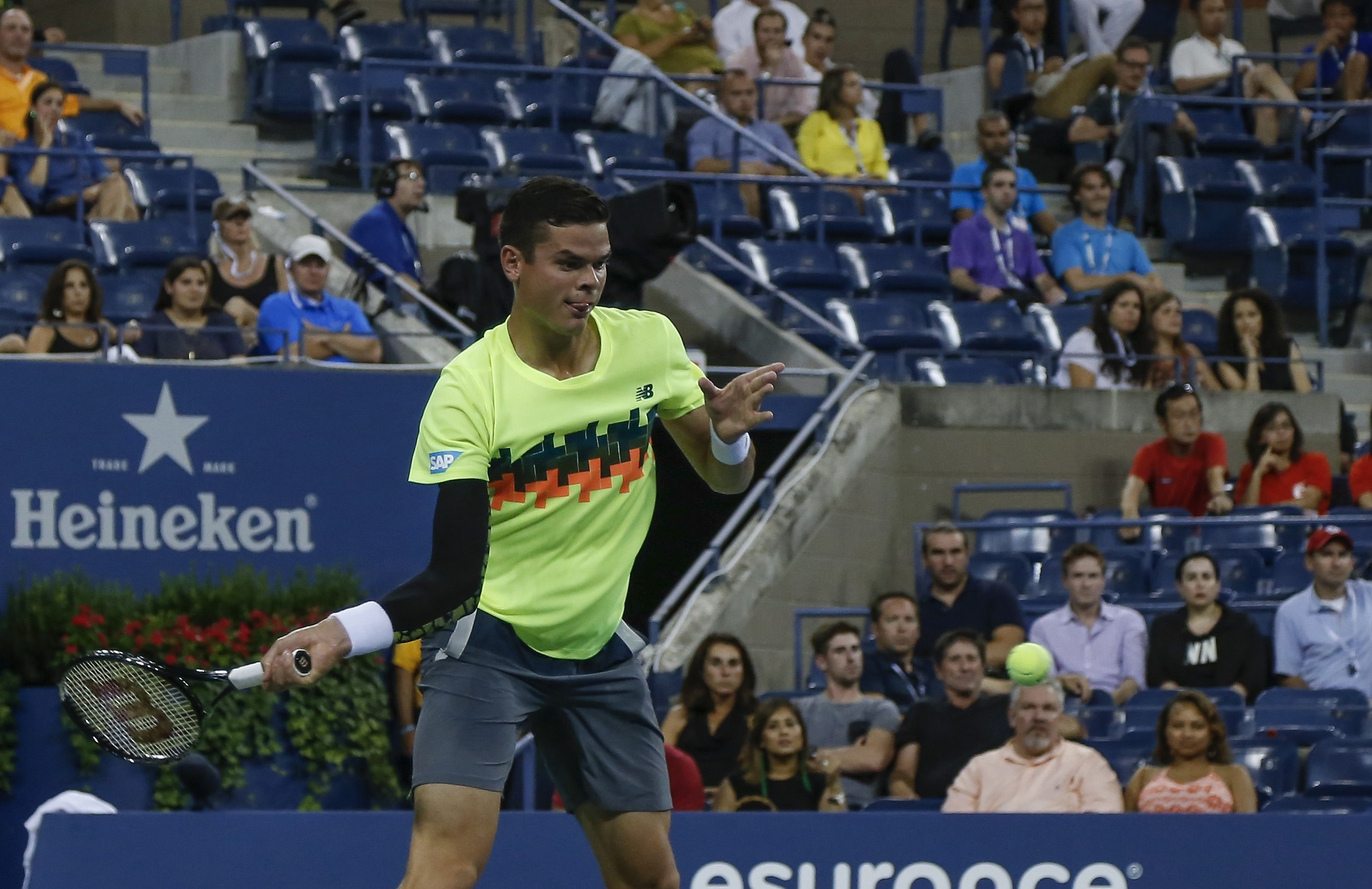 Raonic is among a handful of players who’ve made this year’s open even more of a pleasure to watch. Style might be making a full-time — if limited — return. I’m thinking about Aleksandra Krunic and the black Ninja Turtle ribbon tied around her head. Krunic looks like a gymnast, but played like a samurai. The Jimmy Connors pelvic thrusts were something to see, too. Even in defeat, the headband proved a deadly accent. Every year I root in vain for Robin Haase to make a move at some major tournament. He’s got good, crisp style. But Grigor Dimitrov is ready for prime time and is an excellent alternative (Sharapova’s been sitting in his box). This year, he’s been wearing a blazer lining of a polo shirt. It’s the only thing anybody’s had on that I’d actually want for myself. And long live whatever Raonic is up to with his gelled side part. It’s been eliminated from the tournament (thanks, Kei Nishikori), but he’s giving tennis a young-banker look that’s not as redundant as it you think it would be. 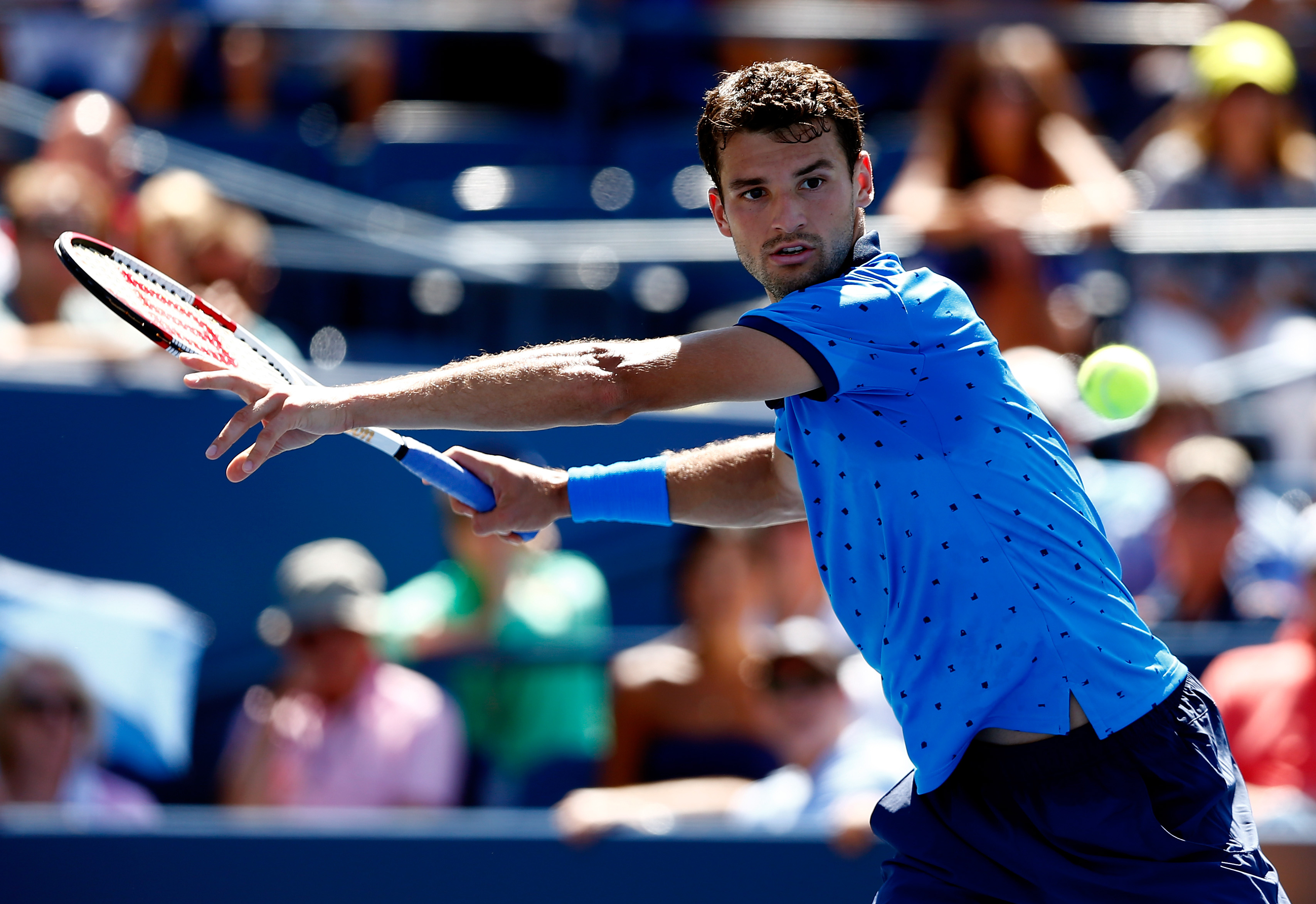 Then, of course, there are Victoria Azarenka’s cruise-ship spin-instructor pajamas. Azarenka’s sleeveless silken office blouse (in three tones of blue) and matching dark blue short-shorts were a smart idea that grows more intensely unflattering with each match: The shirt billows, the legs bunch. It’s too much action. What keeps it from being the worst thing at the tournament is that its badness isn’t captivating, not compared with what Wozniacki’s been wearing. Wozniacki is wearing what feels like an argument both for and against cute shit. 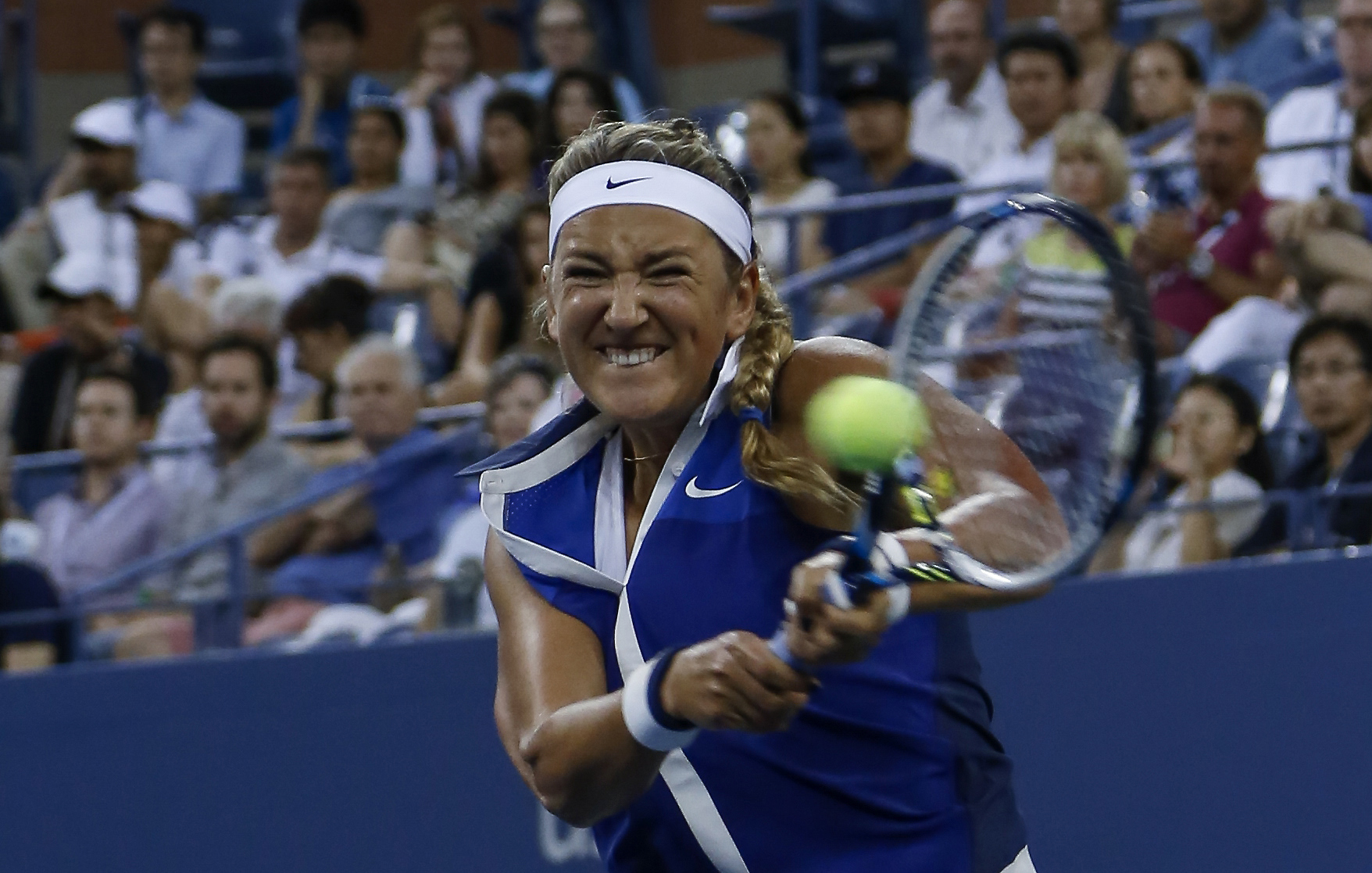 Wozniacki’s conflicting ideas of girlishness aren’t new. The LPGA is beset with a sartorial image problem about whether sexiness, seriousness, and femininity can coexist. In 2014, should we expect them to? A few of the marquee players appear to be purging the dilemma from the wardrobes, and slowly, perhaps, from the sport. The days of the Paula “Pink Panther” Creamers of the world might be numbered. But the difference between Wozniacki and certain professional golfers is that there’s a part of you that always wonders whether she’s futzing with some presumption about her, about how much her Danish features make her look like a doll perched on a kid’s bed, never played with.1

This year’s dress is so unfashionable that you assume its wearer just doesn’t care or know, that she put it on to make a point about wearability in general. It’s hard otherwise to know where in sport or life it goes. But should Wozniacki make it to the final, what she wore to get there might become a thing. Much has been made of the end of her engagement to Rory McIlroy, who fielded reporters’ questions on the matter and then went on to win the British Open. Lately, Wozniacki’s game has had nowhere but up to go. During her 67-week stint as the no. 1 player in the world, she spent a lot of her time fielding questions about the ranking’s alleged illegitimacy, since she hadn’t won a major title. It didn’t seem to get to her until, of course, it did. Her ranking fell as low as no. 18. It’s now back up to 11, and, who knows, Sunday’s win over Sharapova could signal a kind of turning point. In the meantime, that’s also the 1977 ballet-melodrama Wozniacki’s dressed for — that and the movie’s cast party.