The End and Barry Zito 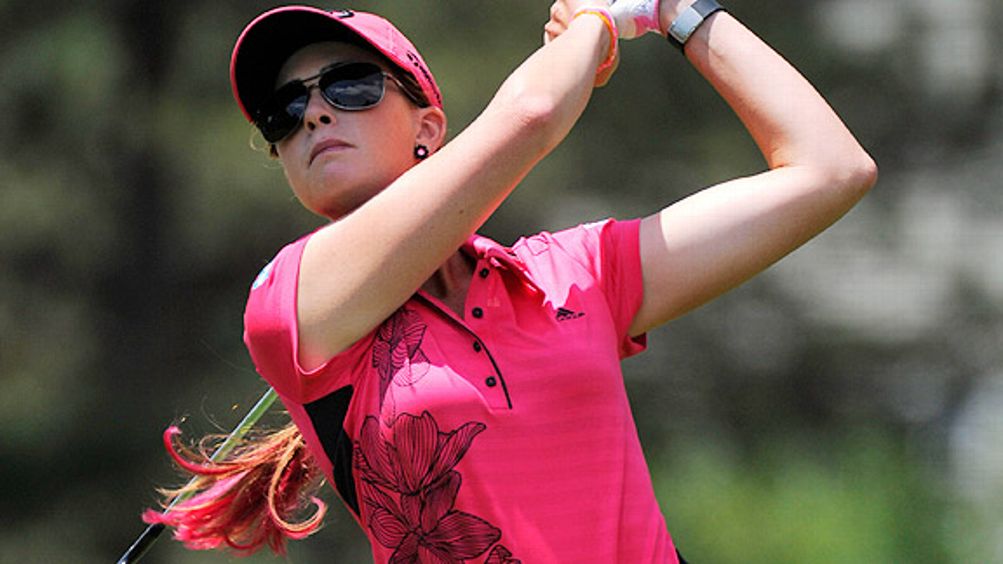 Have the stylists invaded women’s golf? I’m sorry, I mistyped that: Will the stylists invade women’s golf? Please? We’re often reminded that this is an individual’s sport, that it’s a game played between a golfer and her mind. Usually, what you notice when these minds step onto the greens is that they’ve been lost. Last month’s U.S. Women’s Open in Colorado Springs was a free-for-all of did-she-just-oh-I-guess-she-did. Late July’s Ricoh Women’s British Open was a touch worse. At both tournaments, the prevailing sense was that too many of these women didn’t know what to wear so a few wore a little of everything.

Take Paula Creamer. At the U.S. Open, she teed off sporting lady-bug-print fingernails, little bloomed-rose earrings, and what looked like gratuitous red accents in a ponytail that appeared to be auditioning for Anaconda 9. She was covered in logos and pins, and the anaconda had been sectioned off with vaguely patriotic ribbon. Creamer looked ready to go from the 18th hole straight to a closing shift at T.G.I. Fridays.

They call Creamer the Pink Panther, and one the final day the panther was on the prowl. She hit the course in cupcake-icing pink — hat, sneakers, shorts. The shorts had a faint box pattern, which I suppose qualifies as restraint. Still, it was all too much. The thing about cupcake icing, at least for me, is that I usually wind up wiping most of it off.

These women are dressing miserably; they’re almost defensively girlish. Mika and Ai Miyazato aren’t related, but their pinks don’t seem to know that. Mika wore Pepto-Bismol pink and Rolaids blue, and then had the temerity to pop the collar on her shirt (it was the same at Carnoustie, though, wisely, she turned the collar down). I liked the slate knee-highs Miyazato wore on Sunday at the U.S. Open (she missed the cut in Scotland). They were on the demure side of bad schoolgirl.

They had unfortunate company. In Colorado Springs, Cristie Kerr tucked a deep-pink polo into a snug pair of capris. A white Lacoste crocodile belt choked the whole thing off. Really, though, what is a woman golfer supposed to wear? It’s a problem — one increasingly hard to solve. You could spend a happy eternity on what the men are wearing. Just this Sunday at the Bridgestone Invitational, Adam Scott won even though he was dressed for a country-club funeral, and Ryo Ishikawa dropped his share of the lead looking like a Power Ranger. But “bad” for men is bad at a much more sophisticated level. These guys are going for something, and it’s true that sometimes you’d wish they’d go for something else. But with Australia and Europe back near the top of the sport, tailoring has reentered the game, and that’s exciting.

The stars of the LPGA don’t provide the same thrill. No one really knows what to wear. And the one’s who do tend to be the veterans. You see Juli Inkster strolling around the greens as she recently did at the U.S. Open and your heart melts. On Day 3, she wore a mint-ice-cream skirt that moved a bit when she walked and a deep V-neck that was piped with matching green. It was summery, and it was mature. She looked comfortable and free to play. Inkster won’t be on the tour forever (she’s 51), and when the day comes for goodbye, god will her common sense and easy way with clothes be missed. But I’m sure the kids look at her and think, god, she looks like my mom. 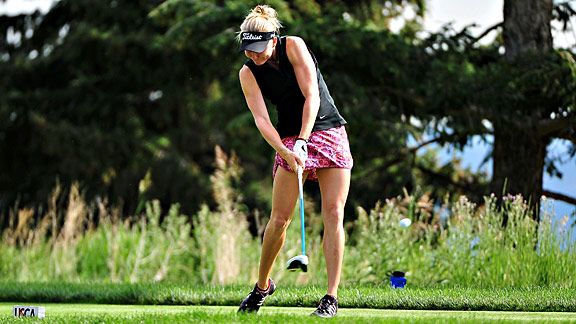 The LPGA has been around for 61 years, and it currently has a loose dress code. “We allow sleeveless and collarless shirts to be worn during play,” says its website. “There is no specific length requirement on shorts or skirts. Denim, cut-offs, workout clothes are not allowed.” It’s unclear how often the code is enforced and whether players violate it. But the terms themselves are vague: What even constitutes workout clothes in 2011? This sounds like a no-no from the Kathy Whitworth/Nancy Lopez/Judy Rankin eras, when women won tournaments in honest-to-goodness outfits that connoted taste and class. They had notes of Mary Tyler Moore, Maude, and maternity. Players took it upon themselves to look as if they wanted to be taken seriously, but they also wanted to be comfortable on the course. It was the age of Bobby Riggs’ chauvinistic trash talk, and women often had to defend their athleticism against piggish men. Beth Daniel and Annika Sorenstam helped make the sport look more obviously athletic, which might have wound up confusing matters more. We’d entered a new defensive era: I’m not my mother, dammit. I’m a jock.

As a point of comparison, in the early days of tournament tennis conventional femininity seemed utterly more natural. The skirts were long, the blouses frilly. You see footage of Suzanne Lenglen in, I don’t know, 1923, leaping for shots and fully stretched in miles of pleated skirt, and marvel at how she dominated the sport for a dozen years with her head wrapped in bandeaus and in fabric that sometimes came yea close to grazing the court. She looked as much like she danced for George Balanchine as she was eager to make you eat her volleys. Which is to say that she and Helen Wills Moody, who played in a signature sailor suit, had great tailors.

Tennis clothes are shorter and tighter now. The pay between men and women at the four major tournaments is now equal, and there’s limited demand for the comforting ladylikeness of the Lenglen-Wills Moody era. But now there’s no need to mask it. We want sport. We want charisma. We don’t want gender studies. This is true for the players, too. There is sex in tennis. There is power. There is noise, and there is fashion. There is also, occasionally, style. Women’s tennis is unselfconsciously attired and, often, unselfconsciously played. 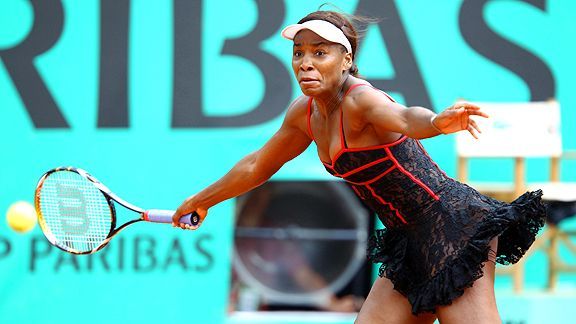 The attire might not always be pretty, but even at its most City Sports, it’s practical and not going for too much. At the superstar level there are exceptions, and they’re always interesting. When Venus Williams arrives in France wearing a cancan-corset costume, you don’t worry about the state of women’s tennis. You just wonder whether she knows she looks like an extra in the video for “Lady Marmalade.” You also know that she’s experimenting: What can’t I wear out here?

Golf hasn’t gotten this far. It’s still defending itself against the perceived disapproval of the chauvinists. It still feels politicized. It wouldn’t know what to do with a Williams sister or a Bethanie Mattek-Sands, whose circus costumes and eye black would have us believe she’s the Lady Gaga of tennis. Some women in golf don’t put much thought into their attire because they truly don’t care. Some don’t care because, on some level, we expect them to do. That tension predominates the sport maybe more than it did 20 years ago: Are you here to watch us play or not?

On some level, Creamer might be just what the sport needs. The LPGA could probably do more to make her a star, but my mother knows who she is … so mission accomplished there. She’s young and cute and innocent, albeit in a don’t-let-the-pink-fool-you sort of way. There’s something unpolished about Creamer, too. Her pinks are so pink. They’re kind of tacky. On Day 3 of the British Open, she had mercy on the spectators, wearing long, white shorts that cuffed at her knee and a bright-but-faded purplish top over the pervasive long-sleeved thermals that keep these women warm but never give them a plausible shot at style.

Creamer also stars in ads for Ricoh wearing her signature pink and swinging her club in conference rooms and on the Park Avenue greenway. She’s the Amy Adams of elite sporting, although when, in the Park Avenue ad, she takes out a sand wedge, smiles, pops her comic-strip eyes, widens her stance (in a skirt a lot shorter than any I’ve ever seen her play in), and talks about a “descending blow,” I had to visit IMDb.com to see which Adams movie that might have been from.1

The camp of Ryann O’Toole also seems eager to make her a pinup. Someone’s had her do poolside photo shoots, and she’s on the tour as a rookie after a stint on Golf Channel’s Big Break reality show. If O’Toole wants sex symbolness anywhere near that of Serena Williams, Danica Patrick, or Maria Sharapova, she appears to want it as far away as possible from the actual sport of golf. Her attire for the U.S. Open consisted of short, print skirts and frilly sleeveless athletic shirts (in black) and a red pullover and the requisite visor. It was a mess.

When men complain about how badly women golfers dress, you can’t tell whether they want to see better clothes or just more skin, whether they want sex. If we’re being honest, Phil Mickelson’s been dressing like a member of the LPGA for years, and no one’s said a word. It wouldn’t be wrong for a man to complain that Wendy Ward at the U.S. Women’s Open looked ready for a Bud at the clubhouse, and that on someone else you’d call what she was wearing “capris” but on her you’d ask, “Dude, where are the rest of your pants?” But most men who’d say this really want to see Anna Kournikova, and why on earth should Wendy Ward have to answer for that?