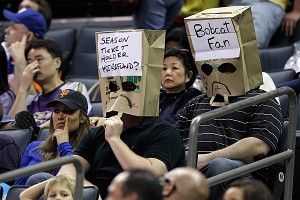 A couple weeks back, the Knicks’ Jared Jeffries suggested the Chicago Bulls were a more vulnerable playoff opponent than the Miami Heat. But even in an era where offhand comments are megaphoned into brash proclamations, no one cared. One reason Jeffries’s statement failed to cause much conflagration: He’s Jared Jeffries. The other? He was clearly right.

Since the Bucks were removed from the playoff picture, the Knicks and the Sixers spent a week tussling for the seventh and eighth seeds in the Eastern Conference. In a small twist, facing off against the top-ranked Bulls is less frightening than a run-in against LeBron James and Dwyane Wade. Derrick Rose’s lingering injury is part of it, but the Heat are the only team in basketball that pulses with scariness. When they’re playing well, there’s an otherworldly ferocity that cannot be matched.

The Knicks have lost to the Heat three times this season, by an average of double digits. The memory of Mario Chalmers hounding Jeremy Lin in the backcourt is indelible. Thanks to the malleable nature of the late-season standings, some Knicks fans pleaded for the team to tank a few otherwise-meaningless games. Instead, they nipped Atlanta, took down the Clippers and, on Thursday night, faced off against the Charlotte Bobcats, a team on the verge of owning the worst winning percentage in NBA history.

Before tip-off, it appeared the Knicks were following their fans’ instructions. Carmelo Anthony, Tyson Chandler, Baron Davis, and even Toney Douglas sat out. For the Bobcats, a team that had lost 22 straight games, guys like Josh “Big Jorts” Harrellson and Mike Bibby stood in the way of escaping monumental wretchedness. “Being the worst team in the history of the game is not something you cherish,” Charlotte coach Paul Silas said.

After several of the Bobcats’ early possessions ended in a pair of air balls and an errant lob that sailed impotently out of bounds, Silas grimaced. No one grimaces like Paul Silas. It’s a toothy scowl of disgust and rage and concession, as if he’s lost a bet and now must gullet a warmed tin of cat food. Other times, he gives a wry smile and cocks his right eyebrow. He’s almost amused when Kemba Walker does things that only worked against Rutgers. There are so many phenomenal and unexplored GIFs and memes in this man’s pained expressions. 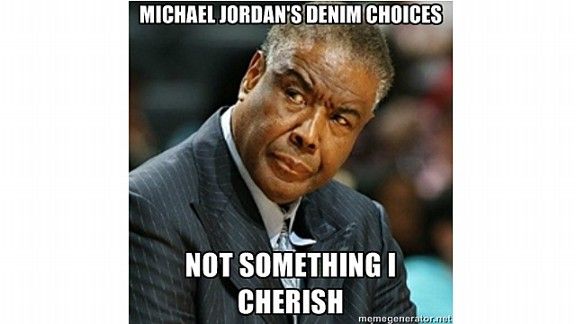 As the Bobcats bungled things, Michael Jordan, a paragon of ineptitude in all aspects of franchise governance, glowered in the darkness of the owner’s box, his wide shoulders shrouded by a billowy black dress shirt. One imagined he was wearing his most somber pair of shredded, paint-splatted, bedazzled yellow jeans. After an offseason where Jordan took a hardline stance against the NBA Players Association, it’s delicious that the athletes he betrayed have etched his name into the record books as a loser.

There are some bad teams whose futility is mystifying. Not Charlotte. They did not lose a superstar free agent. Half the Bobcats roster was not tragically culled from the earth in a freak locomotive accident. They are just deeply, richly terrible. Even playing for pride against a disinterested foe — Tyrus Thomas dramatically fist-pumped after knocking down an early 3-pointer, you should know — they’re a slovenly mess. Big men heave up bricks from the perimeter, guards dribble recklessly into snarls of traffic to fling up scoop-shots, and DeSagana Diop lumbers down the court as if attempting to ford a nipple-deep river.

Against this collection of jesters, even the depleted Knicks looked like a threshing machine of glinting, whirling blades. Harrellson had 18 points and nine rebounds. Bibby racked up 12 assists. Amar’e Stoudemire briefly resurrected his role as a bully by sledgehammering dunks and taunting his humiliated victims. As the Knicks’ lead snowballed to 17 by the early fourth quarter, the greatest source of drama came from whether J.R. Smith would manage to needlessly injure himself. It didn’t matter, anyway: in Detroit, Philadelphia locked in their date with Chicago by resting their top four scorers and losing by 22 to the Pistons. The Sixers learned last year that the Heat are best avoided in the first round.

Are there any bright spots for the Bobcats? Let’s see. Byron Mullens is developing into a poor man’s Spencer Hawes, albeit with the pervy mustache of a late-night convenience store employee from Little Rock. And rookie Bismack Biyombo, the blogger-lavished product from Lubumbashi, did the Mutombo finger-wag after extending his condor wingspan to snuff away a Landry Fields floater. That was fun to see.

With about six minutes left, and the outcome decided, MSG aired an ad for this Saturday’s opening game of the New York–Miami series. There was footage of the Heat’s Big Three chortling about the endless titles they would win. Then came archival clips of Alonzo Mourning and Patrick Ewing and P.J. Brown and Allen Houston. Naturally, we were treated to a shot of Jeff Van Gundy losing his hair and his mind at the same damn time. The traditional malice between these teams and the star wattage of James, Wade, Anthony, Chandler, and Stoudemire makes the coming series irresistible. While the Knicks dream of adding more memorable moments to one of the league’s best rivalries, the Bobcats just want to be forgotten.