Souper Bowl I: A Tale of Two French Onions 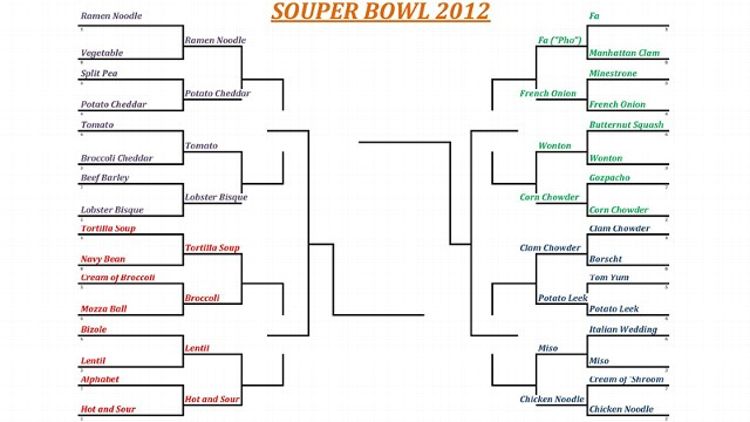 As we enter the last few days of the Souper Bowl, I think it’s safe to say that we’ve all learned a lot of valuable lessons: what it means to overcome adversity, and the significance of having a unified vision for success, for starters. But most importantly, we’ve learned a lot about ourselves. (Namely, we’ve learned that we all care way too much about soup and an online tournament of soups put together by a group of people who run a sports and culture website on the Internet means way too much to us.)

French Onion — without a doubt the most surprising contender of the remaining soups — is also the lowest seed to make the Final Four. After dispatching two fairly strong competitors in “Fa”/Pho and Wonton, as well as a less-than-stellar opponent in Minestrone (I mean, has anyone besides someone’s aunt ever ordered Minestrone in a restaurant? Has anyone ever thought, Hey, you know what would really hit the spot right now? A random assortment of vegetables and legumes in some sort of vegetable broth! What is that soup called again? Hmm, I can’t even remember its name because that’s how little significance it has to me and everyone else. I think it might be called Minastrome? Yeah, that’s it, Minastrome. I’d like some Minastrome. No, no they haven’t.), French Onion now finds itself pitted against a soup many observers are calling the French Onion of the Northeast — Clam Chowder. Just kidding, no one calls Clam Chowder the French Onion of the Northeast, you weirdo.

Opposite the battle of the two French Onions (nope, still no one calling it that) is the showdown between Tortilla Soup — which most recently dispatched Hot and Sour as though it were Minastrome — and Lobster Bisque, which managed to somehow eke out a win against Grantland staff favorite Ramen.

It seems worth noting that there was some Ramen-related confusion among the staff (read: literally, only Bill Simmons). The Ramen that the selection committee voted in as its overall no. 1 seed was not the same thing as the awful, prepackaged, $0.25 Top Ramen garbage that kids eat in college because they spend all of their money on things that are not ramen. In case anyone else was confused, the ramen we’re talking about is actually the more traditional dish that has a base of pork, or chicken, or beef, or seafood stock (or any combination thereof) that is then flavored with soy sauce, salt, miso, or any number of other delicious flavors. On top of that, literally, our ramen, the good ramen, usually comes with bamboo shoots, hard-boiled egg, and big chunks of slow-roasted pork belly on top of a bed of springy al dente noodles. Doesn’t that sound great? I bet you wish you had voted for Ramen now. Well, you know what, you didn’t, and now French Onion or the French Onion of the Northeast (nope, still not happening) is going to win the whole thing. Way to go.

Vote in THE SOUPER BOWL on our Facebook page now!