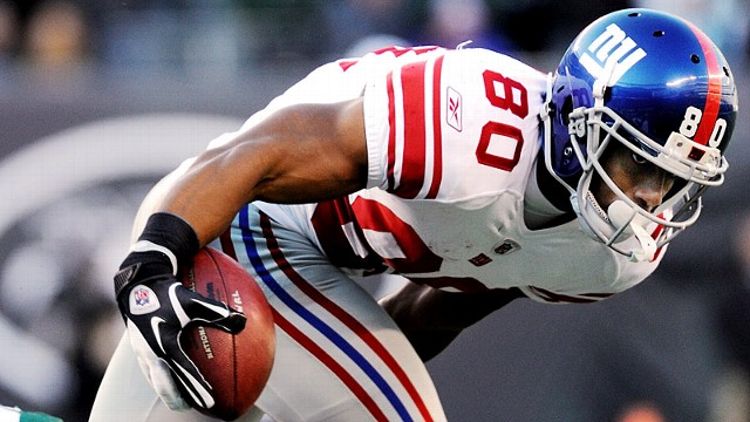 With two weeks of hype for Super Bowl XLVI nearly in the books, it’s easy to forget the events that actually brought these teams here. Sure, everyone remembers the big plays at the end of the Conference Championships, but what about the narrow moments that served as key plays in the Giants’ and Patriots’ seasons long before they ever booked their flights to Indianapolis?

These plays must remain in light! The Giants and Patriots would have struggled to make the big game if it weren’t for these big plays. We’ve identified three now-forgotten moments for each team as their game-changers from the 2011 season. In no particular order …

1. Miles Austin drops the third-down conversion that would have sealed a Cowboys win in Week 14.

There are no guarantees that the Cowboys would have won the NFC East by beating the Giants in their Week 14 tilt at Cowboys Stadium, but it would have made the process a whole lot easier. And they were awfully close to victory when they lined up on third-and-5 with a five-point lead and 2:24 left. A first down would have forced the Giants to use their final timeout to stop the clock, and even if they forced the Cowboys into a three-and-out on the subsequent drive, they would have gotten the ball back with about 30 seconds left, no timeouts, and 70 yards to go for a game-winning score.

Instead, they went for a game-winning knockout and came up narrowly short. The Giants blitzed seven defenders and the Cowboys kept just six in to block, but Dallas held up in pass protection just long enough for Tony Romo and Miles Austin to run the perfect route against New York’s Cover-0 (no safeties) defensive alignment. Austin lined up in the slot and froze Aaron Ross before running a go route right past him. Without safety help, not only would Austin’s route have produced a first down, but a completion would have resulted in a touchdown. It was the right playcall at the right time, and Austin was open by three full yards … but Romo overthrew Austin by one stride. If Romo hangs his pass in the air for even a quarter-second longer, the Giants aren’t in Indianapolis right now. It’s about that simple.

Even after that big win against the Cowboys, losses to the Redskins and Packers meant that the Giants would need to win in weeks 16 and 17 to win the NFC East. That seemed far from certain as they lined up on their own one-yard line for a third-and-10 with 2:27 left to go in the second quarter of their game with the Jets. Already down 7-3, it looked like the Giants would be forced to punt and give the Jets great field position for a two-minute drill. With the Jets taking the ball to start the third quarter, the worst-case scenario could see the Jets scoring two touchdowns and the Giants going down 21-3 before they ever touched the ball again. Considering that Eli Manning had started his day by going 6-of-17 for 82 yards, it seemed unlikely that the Giants would be able to catch up to any sort of significant Jets lead.

Enter Victor Cruz. Cruz caught a quick out at the sticks for a first down, but when he split the tackle attempts of Kyle Wilson and Antonio Cromartie at the marker, the only thing between him and a touchdown was embattled safety Eric Smith. Smith took a terrible angle to Cruz, neither making the tackle nor forcing him to the inside, where there might have been help waiting. The result was a crushing 99-yard touchdown that gave the Giants a 10-7 lead that they never relinquished. In fact, the Giants didn’t trail by more than two points from that point forward through the NFC Championship Game.

3. Jake Ballard gets past the coverage for a 28-yard completion on third-and-10 deep in the fourth quarter of the Giants’ win over the Patriots in Week 9.

While the Giants had been impressive in competing with the Patriots in Foxborough on the first weekend of November, odds were slim they would win when Eli Manning threw an interception in the end zone on a play that could have given them a 17-3 lead to start the fourth quarter. Instead, after a Rob Gronkowski touchdown with 1:40 left and a pair of incomplete passes, it looked like the Giants might stall out inside their own territory with 1:07 to go.

Facing a third-and-10 on his own 39-yard line, Manning went to a somewhat-unlikely target, tight end Jake Ballard. The quarterback recognized that the Patriots were playing Cover-2 and realized that the hole in the coverage would be in the middle of the field, where Ballard was running a seam route. He was pitted against third-string linebacker Tracy White, a special teamer who was only in the lineup because regulars Brandon Spikes and Gary Guyton were injured. White did his damndest to keep up, but Ballard was able to run by him. Safety Patrick Chung read the play and attempted to get across to force the ball out with a big hit, but Manning’s throw was perfect and Ballard made a difficult catch look easy. Five plays later, the Giants were in the end zone (on another catch by Ballard) and the win was theirs.

1. Vince Wilfork recovers a bad snap against the Dolphins in Week 16, giving New England the football.

The Patriots didn’t have many tough moments during their eight-game winning streak to end the regular season, but their comebacks in weeks 16 and 17 to seal home-field advantage in the AFC proved to be crucial. Remember, the conference came down to the 1-seed (New England) hosting the 2-seed (Baltimore), and with a bounce or two going the other way, the Ravens could have been hosting the Patriots for their ultratight Conference Championship game two Sundays ago. Billy Cundiff didn’t miss a single field goal at home this year, going 17-for-17. Maybe he doesn’t pull the 31-yarder at M&T Bank Stadium. Maybe the Ravens don’t even need a field goal to get there.

The biggest play in those two comebacks for the Patriots came early in the third quarter of Week 16, with the Patriots already trailing 17-3 to a Dolphins team that had been moving the ball effectively and efficiently against the New England defense. A stop was key for the Patriots, but with the ball on the Miami 40-yard line, a punt would have pinned the Patriots deep in their own territory. Instead, they got a big play when Dolphins center Mike Pouncey and quarterback Matt Moore left a snap on the ground for Wilfork to recover. It wasn’t some stroke of brilliance by Wilfork or Bill Belichick, but it was a valuable play that flipped field position and produced a Patriots touchdown. By the time Miami scored again, the Patriots had scored 24 points and gone up by 10.

2. A Rob Gronkowski fumble is overturned upon review, giving the Patriots a 23-yard completion against the Jets in Week 10.

Seven days after they lost to the Giants, the Patriots headed to New Jersey to challenge the Jets in their second tilt of the year. With both the Patriots and Jets at 5-3, the winner of the contest would have a one-game lead in the division and whatever momentum was available heading into the dog days of the season.

When Mark Sanchez ran in a two-yard score with 1:24 left in the first half, it looked rough for the Patriots. Now down 9-6, New England would have just two timeouts and 84 seconds to move the ball downfield and set up a possible field goal attempt, let alone a touchdown. Tom Brady started the drive with completions of 12 and 14 yards, but the real chain mover came when he hit Gronkowski for 25 yards … only for Gronkowski’s catch to be ruled a fumble on the field.

The long reception only came after Brady eluded a free rusher before finding a streaking Gronkowski over the middle. Gronkowski had beaten Donald Strickand in coverage, but he was flipped head over heels by safety Jim Leonhard. The ball appeared to pop out as Gronkowski was falling headfirst to the ground, but instead, replay revealed that the fumble was caused by the ground after Gronkowski was hit, returning the ball to New England. The Patriots got the ball back and scored four plays later, giving them a lead in the game (13-9, eventually 37-13) and the division that they would never relinquish.

3. Brady hits Deion Branch for a 63-yard reception against the Eagles in Week 12.

Belichick’s team might have looked like favorites to win the AFC East by Week 12, but they were still just 7-3 and had some work to do if they wanted to claim the top spot in the AFC by the end of the season. Their trip to Philly, regardless of the Eagles’ 4-6 record, loomed as the toughest matchup remaining on their schedule. And considering that the Pats were down 10-7 as they faced a third-and-13 on their own 36 early in the second quarter, it was clear that the Eagles were game for a fight.

Brady sent his receivers out and, in an empty backfield, dared the Eagles to cover them all. Philly rushed four and dropped seven players into zones, and the Patriots ran a series of curls that were designed to stretch those zones and create a completion at the sticks for the first down. Nobody was open, and Brady was flushed from the pocket by the rush. When that happened, Branch used that as his cue to abandon the curl route and head deep. His longtime quarterback recognized the move and threw the ball downfield before cornerback Brandon Hughes could react, and while Hughes desperately dove for the football, a perfect throw produced a 63-yard gain that moved the ball down to the one-yard line. The Pats scored on the next play and did not trail the rest of the way.

Souper Bowl I: A Tale of Two French Onions