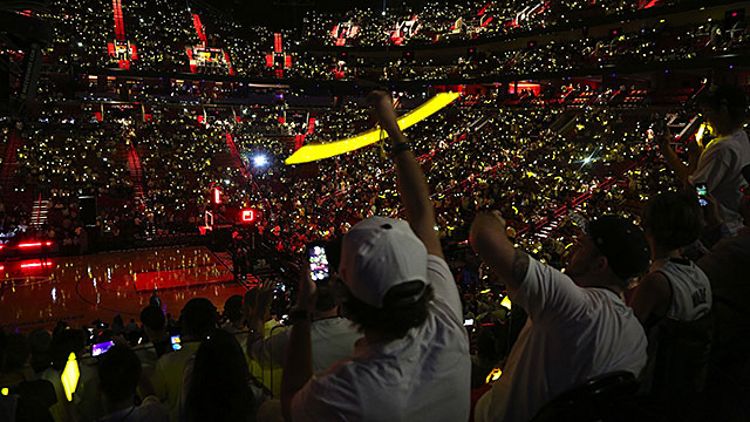 So you want to attend a Miami Heat game, huh?

To do it right, you need to dress as if you’re going to the club. Not a pretentious one where suspender-clad mixologists painstakingly measure absinthe in mason jars. More like a place where jeroboams of champagne are ferried to tables by go-go dancers on zip lines and “Welcome to St. Tropez” eternally pounds.

Allow me to be more specific: For gentlemen, proper wardrobe options include white dress shirts (unbuttoned to the solar plexus), black V-necks (bicep-baring sleeves), Michael Jordan–approved distressed denim, and a sturdy pair of indoor sunglasses. Put on some Flo Rida records before visiting your haberdasher to get inspired. For the women, freakum dresses are definitely appropriate.

I wore my finest Coogi sweater to the Heat-Pistons game on Tuesday night. Because, you know, haters. From the moment you enter AmericanAirlines Arena, you become a member of the Congregation of the Despised. Sure, maybe you’re in the building to root for rebound-grabbing man-child Andre Drummond, but when that camera cascades across the crowd and the earnest, hardworking citizens of flyover states spot you sitting there at a Miami Heat game, they’ll loathe you by association.

So own it. Really take your talents to South Beach. Put on your Coogi, your Gucci, your vintage Versace with the printed spaghetti bowl of gold chains. Stay in a mansion. Be like the Biebs, with a black leather jersey and that Heat fitted ridin’ high. This is Miami, bitch.

The public distaste for Miami’s fans mirrors the disdain aimed at Lakers faithful before the Xavier Henry era — decadent city, lovely weather, celebs in floor seats, banners in the rafters — but what separates South Beach is a feeling that they’re undeserving recipients of all the majesty LeBron has bestowed upon them. It’s not like Heat fans are notorious for chucking batteries or hooting with joy at the paralysis of enemy players. Mostly, they’re known for arriving late enough to leave the inner bowl of the arena a barren meteor crater until the second quarter. And that was before the Reaper-cheating comeback in Game 6 of last year’s NBA finals added early departure to their list of alleged sins. I think they just have their priorities in order: Get back in that Lambo on Biscayne, worry about other stuff later.

On Tuesday, the most newsworthy element of the Pistons’ victory was the final score. Otherwise, it was humdrum. Dwyane Wade sat out resting a creaky body part, both teams sloppily turned the ball over around 20 times, and Josh Smith predictably pile-drove a dunk down Chris Bosh’s larynx. Who cares?!

Not me! Not when there were so many other compelling spectacles. A Hasidic fellow sang a Hanukkah song on the Jumbotron in Yiddish. A fevered rendition of Jay Z and Kanye West’s “Longtime Buddies in Paris” rocked all the way until the 2:09 mark of “I woulda married Kate and Ashley.” Some guy dressed like Fonzworth Bentley yammered into the mic as cheerleaders pitched shirts into the crowd. By the way, you know that blast of hellfire that shoots up and sears the heavens during the announcement of the Heat’s starting lineup? It actually makes your face hot. You could toast s’mores off it. Until the fateful day when a flame-related mishap singes off Norris Cole’s hair, at least.

See, here in the house that Pat Riley built, a championship team and the greatest basketball player in the history of humanity are just part of an entertainment ecosystem designed to subsume activities found elsewhere in the city. There’s Hyde, a nightclub in the bowels of AmericanAirlines Arena, where halftime and the final buzzer are demarcated by the cold thudding bass of YG’s “My Hitta,” bottle service, and confetti drifting down from the ceiling to speckle orders of sushi. Newer is the pair of Flagship restaurants, sleek and airy and glassy and black-bricked, where bare-shouldered fans in Bosh jerseys eat shiso-marinated lamb and Chianti-braised short ribs supplied by rotating celebrity chefs. The buffet is $85. Find your own corn dog.

Guess which stadium has a Moët & Chandon champagne concession bar. Oh, you thought it was the BMO Harris Bradley Center in Milwaukee? Wrong. (Although that does have a thing called “Extreme Loaded Dogs” that sells other things called “Nach-Yo-Dogs” on the 200 level.) And Miami’s VIP entrance is sponsored by Hublot, a Swiss watch company owned by Moët Hennessy Louis Vuitton.

The linguini carbonara, flutes of bubbly, and European timepieces are nice, but Heat games are truly about coming together as humans. Late in the evening, after the team’s loss to the Pistons was all but decided, there was a meaningful courtside moment among Gloria James, her boyfriend Da Real Lambo, and Filomena Tobias (the woman who gave Joakim Noah the finger during the playoffs). For several minutes, they exchanged pleasantries and warm embraces. It was magnificent.

You can keep all those pale, lumpy curmudgeons in Madison Square Garden who just want to gripe about how Carmelo Anthony is no Dave DeBusschere. I’m going to the club.