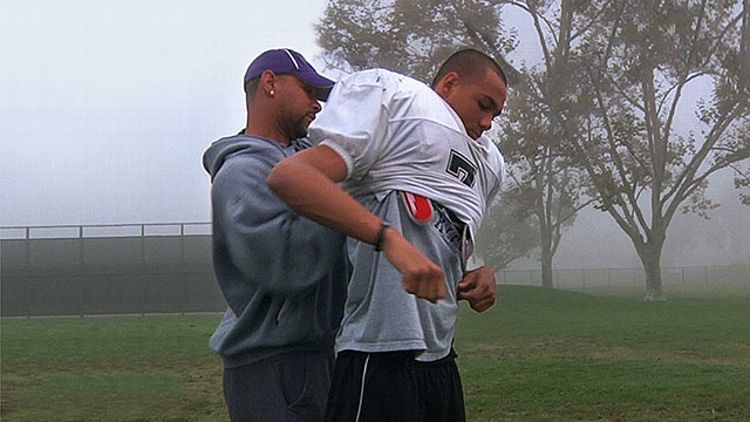 On Wednesday night, HBO aired State of Play: Trophy Kids, a documentary about overzealous parents and the extreme lengths to which they push their children in sports. We follow four different parents and five kids playing tennis, basketball, golf, and football. As you can imagine, some of the behavior is unintentionally funny, and most of it is pretty harrowing — there are confrontations and parents admitting openly that they are vicariously living through their children, investing in them hopes for a future payout, or simply robbing them of a chance to be a kid. Most of all, though, the documentary was nostalgic. Anybody who played sports when they were young remembers a parent like that; maybe they even had one of their own. Here, Rafe Bartholomew, Chris Ryan, and Corban Goble talk about Trophy Kids and their own memories of when parents went too far on the field. The film is currently available on HBOGO.

Rafe Bartholomew: I’m pretty comfortable with a fair amount of aggression from sports parents. In Little League baseball, even though there were no balks, fathers of kids on opposing teams would yell “BALK! BALK!” while I went through my unusual pitching motion. One boy’s father chased me around the field threatening to “knock my fucking teeth out” because of the time I swung my glove blindly across my body to make a tag on a double play and ended up smacking his son in the face. My team took pride in the time our coach instigated a shoving match with a parent on the Expos, the team with all the kids who had really nice batting gloves.

(Unrelated, but noteworthy: The most violent moment of my Little League career had nothing to do with parents. The Manhattan park we played in was across the street from the building that is home to Hot 97, and we were forced to abandon the game after the respective entourages of Lil’ Kim and Foxy Brown started a gunfight outside the radio station.)

My dad could be pretty intense, too. He’d needle me anytime I decided to come home after school instead of going to the recreation center to work on my basketball game and play pickup with older kids. At halftime of one game when I was about 10 years old, I got so sick of hearing him scream “Box out!” that I confronted him near the water fountains and cursed so much that my coach never quite looked at me the same. At high school basketball games, students who wanted a little bit of a sideshow with the main event would sit near my father, who could be counted on to yell things like, “Don’t sub in Jeff! He’s fucking terrible!” He also developed a strange habit of chirping “DEFENSE! DEFENSE!” during the pauses in the “DE-FENSE” chant, because he thought that his calls for defense would better penetrate the players’ minds if he interrupted the normal flow of cheering.

Dr. Spock might disagree, but I consider all this stuff to be within the normal range of sports parenting. It got a little intense, and there were times when the “BALK” chants made me cry, when my father’s exhortations made me cry, and when I said things to him that I regret ever saying. But I never got that dead-eyes look that seems to sweep over the children in Trophy Kids, that expression that says, “I won’t enjoy playing this sport for another 15 years thanks to you.” The level of pathos that these kids experience is greater than anything I witnessed in my childhood, and I’m thankful for that. Hopefully, someday and against long odds, they’ll laugh at it the way my father and I laugh about our stories of overheated sports idiocy.

Chris Ryan: My dad was English, so most of the sports I played were pretty foreign to him. He liked American football, baseball, and college basketball, but I don’t think it really ran in his blood. As such, he was a pretty passive sports parent. He paced a fair amount on the sidelines, but more like a tweed-wearing Brit bird-watcher than a manic coach dad. Who knows, maybe if I had played cricket he would have been out there, face turning red, screaming, “FUCKING BANG IT IN” every time I bowled (shout-out to Google search “cricket phrases” for that one).

But even if my dad was more David Attenborough than Steve Biale, the guy who screams at his high school basketball-playing son, Derek, to “KEEP PENETRATING” (Dad!), I was still pretty familiar with all manner of mad dads. There was the perpetually stoned architect who watched his adopted son play tennis with bloodshot eyes. I remember getting a ride back from USTA camp with this kid and his old man, and the son — who was usually pretty mild-mannered — responded to some critique of his serve-and-volley game by screaming, “FUCK YOU, YOU’RE NOT MY REAL DAD!” The dad responded with a really solid, startling jab to the sternum. It sounds terrifying, but it was pretty hilarious. Even the kid thought so.

That’s the thing: For as crazy as the parents could be, the kids were just as nuts. Nothing a parent ever did on the sideline ever matched the stuff I saw on the field or in the gym. I mean, I was a dirty little shit. Once, when my team was losing an important high school baseball game, I faked a knee injury in a home-plate collision while playing catcher. My coach went nuts, thinking that the runner had taken me out on purpose. He threatened to pull us off the field and dispute the result of the game (to the highest reaches of the Philadelphia Quaker League) — which was exactly what I had in mind in the split second that I had the idea. God, I was such a little sociopath when it came to sports.

What I’m curious about, and what the film hints at with Derek Biale’s dad pumping him full of creatine, is how this has all changed with time. Like, are there Advanced Stats Dad out there somewhere, screaming, “NO LONG 2’s!!! BE MORE EFFICIENT!!!” Or maybe Thinks He’s Dr. James Andrews Dad, who comes ambling out onto the court every time a kid twists his knee? That’s what I want to know: Has insane parenting kept up with the times?

Corban Goble: I would have loved to see, for the sake of balance, a parent-child dynamic in Trophy Kids where the kid was absolutely a special talent. I realize there probably aren’t a ton of good examples of people who (a) have children who are once-in-a-generation talents, and (b) will allow a film crew to document said once-in-a-generation talents, but I would have gotten a kick out of the modern-day Bean Bryant– or Mitchell Wiggins–type just kind of shrugging his shoulders in modest approval before heading out to shop for real estate.

What I liked about Trophy Kids, though, was how it gave a glimpse of the straight-up mania of these parents. By whatever way the human mind allows you to do this, they clearly believe that they’re acting in the best interest of the kid. It’s so twisted, but it’s like they’re too far gone. I went to a high school that was very controlled by the athletes’ parents, which was always frustrating and perverse, but I remember a particular dad who had just crafted his own universe that was so bizarre that you couldn’t really help being flattened by the absurdity.

My younger brother runs track at an Ivy League school, and I remember this dad of another kid on the track team regularly engaging my brother to ask how his recruitment was going when both his son and my brother were seniors. It was just a device to talk about his own son — as soon as my brother would talk, he’d immediately interrupt with “Oh yeah Billy [name changed] didn’t like Brown, he’s thinking about Stanford! Harvard is interested, too …” and it was all just total bullshit. The kid himself would often be standing there, just kind of slumped in this submissive body language, as if his only goal was to have the conversation run its course and slink out of the way. And it’s like, all it was going to take to squash this claim was my brother texting the coach at Brown (or wherever), places that were also giving him a look at the time, and asking, “Hey are you recruiting Billy? He’s on the track team with me.” And the coach would have certainly been like, “Who the fuck is Billy?” The lie just compounded to the point of no return.

While I believe this guy really, deep down, knew that he was lying, something about him believed it so hard that it became the truth to him, and this false thing in turn supported his entire belief system about himself and about his son. And instead of calling him on it, all we could really bring ourselves to do was say “Oh, yeah, cool” and just pretend like something real and unremarkable had just happened. It’s insane and I think it’s more complex than “the parent is just projecting his own insecurities on his child.” It’s tough to line up and I think Berg’s State of Play, while not being the greatest thing in the world, does a good job of communicating that tension.

NBA Shootaround: Rip It Up and Start Again